Flash of Invisible Light Illuminates Fabric of the Universe

A brief but brilliant burst of radiation that travelled at least a billion light years through Space to reach an Australian radio telescope last year has given scientists new insight into the fabric of the Universe.

ICRAR-Curtin University’s Dr Ryan Shannon, who co-led research into the sighting along with the California Institute of Technology’s Dr Vikram Ravi, said the flash, known as a Fast Radio Burst (FRB), was one of the brightest seen since FRBs were first detected in 2001.

The radio pulse FRB 150807: The color shows the frequency of the waves, which is like the colour of light. The brightness varies with frequency due to a process termed “scintillation”, which is caused by the twinkling of the burst in the cosmic web. This scintillation is the fingerprint of turbulence in the cosmic web and tells us that web is very placid. 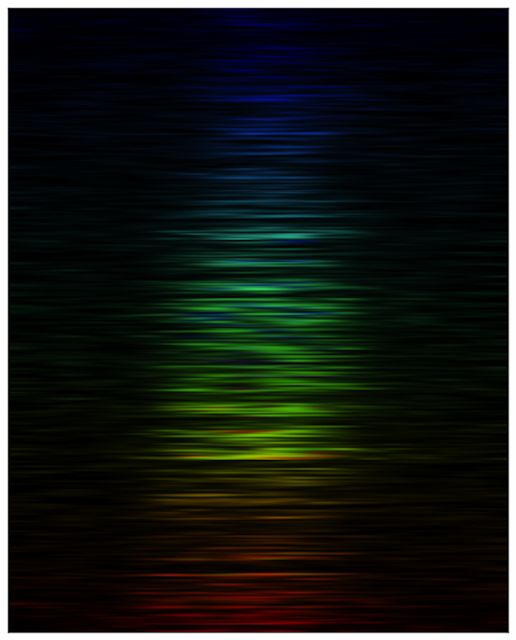 The flash was captured by CSIRO’s Parkes radio telescope in New South Wales.

Dr Shannon, from the Curtin node of ICRAR (the International Centre for Radio Astronomy Research) and CSIRO, said all FRBs contained crucial information but this FRB, the 18th detected so far, was unique in the amount of information it contained about the cosmic web – the swirling gases and magnetic fields between galaxies.

“FRBs are extremely short but intense pulses of radio waves, each only lasting about a millisecond. Some are discovered by accident and no two bursts look the same,” Dr Shannon said.

“This particular FRB is the first detected to date to contain detailed information about the cosmic web – regarded as the fabric of the Universe – but it is also unique because its travel path can be reconstructed to a precise line of sight and back to an area of space about a billion light years away that contains only a small number of possible home galaxies.”

Dr Shannon explained that the vast spaces between objects in the Universe contain nearly invisible gas and a plasma of ionised particles that used to be almost impossible to map, until this pulse was detected.


The location of the FRB 150807: The yellow circle shows the typical location of an FRB. There are thousands of stars and galaxies in this direction. Because the burst was very bright we were able to locate it to a small region near the edge of that circle, shown as the pink banana-shaped region in the inset.In this region there are only 6 detected galaxies. The position of the most likely host galaxy, VHS7, is highlighted on the plot. 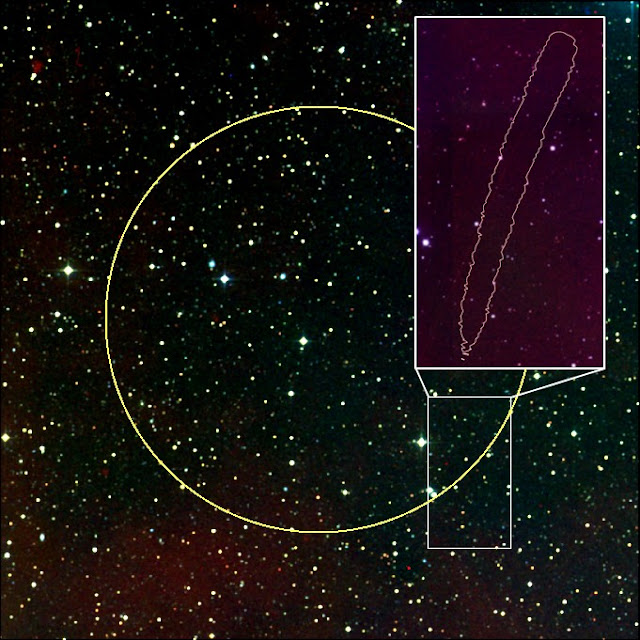 “This FRB, like others detected, is thought to originate from outside of Earth’s own Milky Way galaxy, which means their signal has travelled over many hundreds of millions of light years, through a medium that – while invisible to our eyes – can be turbulent and affected by magnetic fields,” Dr Shannon said.

“It is amazing how these very few milliseconds of data can tell how weak the magnetic field is along the travelled path and how the medium is as turbulent as predicted.”

A paper describing the FRB and the team’s findings was published today in the journal Science.

The Parkes telescope has been a prolific discoverer of FRBs, having detected the vast majority of the known population including the very first, the Lorimer burst, in 2001.

FRBs remain one of the most mysterious processes in the Universe and likely one of the most energetic ones. To catch more FRBs, astronomers use new technology, such as Parkes’ multibeam receiver, the Murchison Widefield Array (MWA) in Western Australia, and the upgraded Molonglo Observatory Synthesis Telescope near Canberra.

This particular FRB was found and analysed by a system developed by the supercomputing group led by Professor Matthew Bailes at Swinburne University of Technology.

Professor Bailes, who was a co-author on the Science paper, also heads The Dynamic Universe research theme in the ARC Centre of Excellence for All-sky Astrophysics (CAASTRO), which has seven Australian nodes including ICRAR-Curtin University.

“Ultimately, FRBs that can be traced to their cosmic host galaxies offer a unique way to probe intergalactic space that allow us to count the bulk of the electrons that inhabit our Universe,” Professor Bailes said.

“To decode and further understand the information contained in this FRB is an exceptional opportunity to explore the physical forces and the extreme environment out in Space.”