There is a whole lot of shaking going on at football games.  Fans are generating enough force during celebrations that eventful plays can be recorded on seismographs.

As an institution that values its football traditions and its academic research, The Ohio State University doesn’t just make big plays—it measures exactly how big those plays are, and uses the data to teach students valuable lessons in science.

That’s the gist of a new project under way here, where geologists have planted sensors around Ohio Stadium to measure the seismic activity generated by fans as they cheer on the Buckeyes.

In partnership with Miami University and the Ohio Department of Natural Resources, professors in Ohio State’s School of Earth Sciences conceived of the project at the start of the 2016 football season as a way to help students get an intuitive sense of concepts in geology that are sometimes hard to grasp.

The general concept is pretty simple: As fans jump up and down, the vibrations under the stands are measured by seismographs, the instruments used to measure the power of earthquakes.

As an institution that values its football traditions and its academic research, The Ohio State University doesn’t just make big plays — it measures exactly how big those plays are, and uses the data to teach students valuable lessons in science. That’s the gist of a new project under way here, where geologists have planted sensors around Ohio Stadium to measure the seismic activity generated by fans as they cheer on the Buckeyes.

Courtesy of The Ohio State University

“We’ll feature the measurements in classes, so that undergraduates can engage with real-world data and connect it to an experience many of them have had in person,” said project leader Derek Sawyer, assistant professor of earth sciences at Ohio State, who brainstormed the project with Wendy Panero, associate professor, and Ann Cook, assistant professor. “At a more advanced level, we’ll use the data to teach data reduction and collection as well as wave propagation, earthquakes and the local geology. We’ve already achieved some exciting preliminary results.”

Among those early results: Music from The Ohio State University Marching Band amplifies fan quakes in a way the researchers didn’t expect.

“We expected that the most exciting plays would make the biggest fan quakes, and that's true,” explained Miami University geologist Michael Brudzinski, “but sometimes the fan quakes grow even larger after the play is done, because the music starts. The music helps the fans to jump in unison, which leads to even stronger shaking of the stands.”

The Seattle Seahawks measured fan quakes first, inspired by the “Beast Quake” in a 2011 playoff game during which running back Marshawn Lynch scored on a touchdown run, and the resulting celebration registered on seismographs outside Century Link Field.

Sawyer and his team wanted Ohio State to be the first university to measure fan quakes, and with a stadium that seats at least 30,000 more people than the Seahawks’ (104,944 versus about 70,000), they knew they’d record some big seismic activity.

This seismograph was recorded in Ohio Stadium during the Oct. 29 game with Northwestern, and covers the first hour, including pre-game. The seismic activity near the beginning of the graph is caused by people filing into the stadium. Other signals represent big plays and the first quarter break. 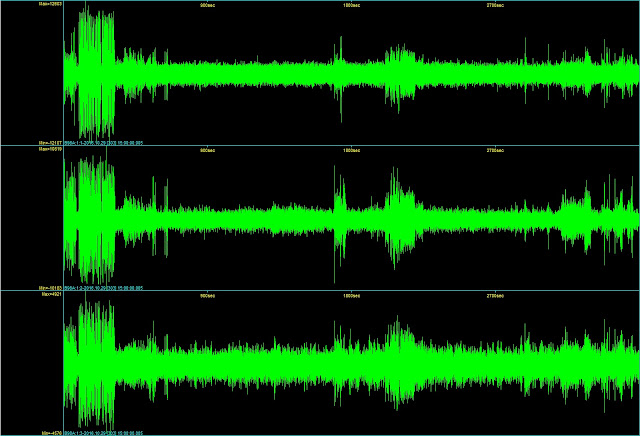 To help people understand just how big different fan quakes are, the researchers created what they’re calling the “FanQuakes Magnitude Scale,” which converts shaking from fans into the perceived magnitude of a naturally occurring earthquake, if one were to occur centered 10 kilometers (about 6.2 miles) below ground underneath the stadium.

The largest fan quake they recorded so far was triggered by Curtis Samuel’s touchdown catch at the beginning of the second half versus Nebraska on Nov. 5. The shaking lasted more than two minutes and reached a FanQuake Magnitude of 5.2. Another notable play in the same game, Damon Webb’s interception and touchdown in the first quarter, generated a 5.1-magnitude quake.

Geologists at The Ohio State University took advantage of a School of Earth Sciences office inside Ohio Stadium to install a seismometer as a test run for recording "fan quakes" during football games. Data from this and other seismometers around the stadium will be used to teach students lessons in data analysis and earthquake science. The project is a partnership between Ohio State, Miami University, and the Ohio Department of Natural Resources. 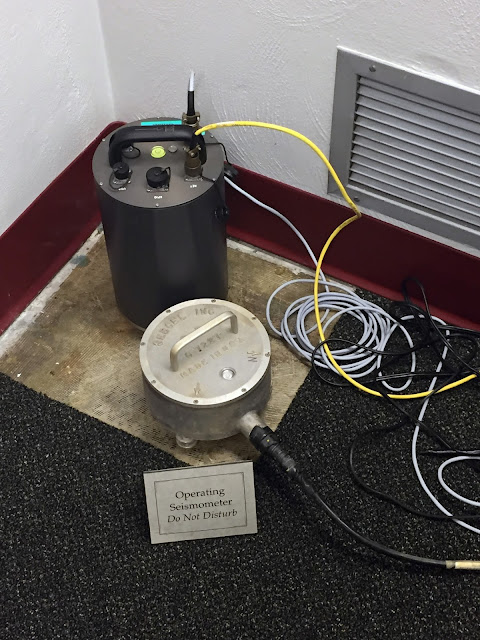 Jeffrey Fox, a seismologist at the Ohio Department of Natural Resources and Ohio State alumnus, said that fan quakes present a good opportunity to get people thinking about earthquake hazards in general.

“As more and more people move to and live in earthquake-prone areas, they should be aware of seismic risk,” Fox said. “Even in areas such as Ohio, where the risk is low, it’s not zero.”

The researchers are hoping football will make learning about seismology fun. They’re also looking forward to measuring fan quakes generated during the Nov. 26 game with rival University of Michigan, when, as Brudzinski added, fans may “take it to another level.”