Using 3D-printed replicas of 200-million-year-old mammal teeth and polymers that mimic insect prey, scientists at the University of Massachusetts Amherst this week provide the first laboratory-tested evidence that the ability for teeth to damage prey is a more significant factor driving evolutionary changes in tooth shape than either bite force or the animal’s energy expenditure.

This unexpected finding should change the way biologists view natural selection as it is studied through dental morphology, the authors say. Tooth shape is linked to diet and the biomechanics of feeding, and much of what is known about early mammalian evolution comes from their fossilized teeth, they point out. Details appear in the current online edition of the British Royal Society journal, Interface.

3D-printed replicas of 200-million-year-old mammal teeth and polymers that mimic insect prey to provide the first laboratory-tested evidence measuring the ability for teeth to damage prey. 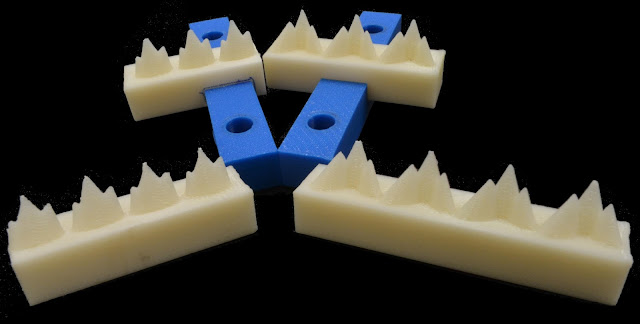 Credit: University of Massachusetts at Amherst

For this work supported by the National Science Foundation and the Human Frontiers Science Program, the team used 3D-printed replicas of 200-million-year-old molars in their tests to simulate a bite. The teeth came from two shrew-like early mammal species, the primitive Morganucodon and more advanced Kuehneotherium. Both species, considered exemplars of early mammal evolution, were underfoot when dinosaurs roamed the earth in the Triassic Period.

Conith says, “The big question here is why teeth look the way they do. Most of the work on early mammalian tooth evolution has been descriptions of what they look like and how they could potentially work as tools for biting and crushing insects. We took it one step further, to make these tools and test them. We merged two modern technologies and used 3D prints of teeth to ‘bite’ into polymer gels with a exoskeleton-like crust that accurately mimicked insects.”

He adds, “Based on these experiments, we think the factor that natural selection worked on was the ability to break apart food, and that selection for maximum damage is the primary determinant of tooth shape.”

Until now, most research has ignored damage in favor of investigating force and energy based on the assumption that selection favored animals that expend the least force and energy, Conith says. “But I think people will need to reconsider these typical parameters and now think more critically about damage. It’s an important consideration. We haven’t rewritten the book, but we have added a new chapter.”

To imitate insect prey for experiments documenting bite force, energy efficiency and damage by Morganucodon and Kuehneotherium jaws, the researchers constructed gel-filled, candy bar-shaped rectangles coated with a polymer shell to mimic an insect’s exoskeleton. Based on factors in the literature, they constructed two polymer “proxy insects,” one hard- and one softer-shelled, and ran 10 experiments for each type using both Morganucodon and Kuehneotherium molar shapes.

They used a force-testing machine to bite the proxy insects between 3D-printed teeth replicas from an upper and lower jaw. The researchers measured the force, work done (energy) and damage inflicted to the gels. To assess damage they measured the cracks and fractures in the polymer coating from digital photographs following a biting trial.

The authors report that the more primitive Morganucodon model required less force and energy to fracture hard gels while Kuehneotherium required less force and energy to fracture soft gels. “More importantly, Kuehneotherium also inflicted more damage to both the hard and the soft gels. These results suggest that changes in tooth shape in some early mammals was driven primarily by selection for maximizing damage, and secondarily for maximizing biomechanical parameters such as force or energy,” Conith and colleagues write.

He adds, “When we started this project we thought we’d only report the force and energy results, we never thought about damage. It wasn’t until we actually saw the destruction Kuehneotherium could inflict on our model insects that we thought it would be interesting to measure. In science your general ideas may be correct, but the details can be so much more complex.”

Contacts and sources:
Janet Lathrop
University of Massachusetts at Amherst
on November 18, 2016