Where's the best place to start when retracing the life of a person who lived 4,000 years ago? Turns out, it's simple -- you start at the beginning.

Using a method known for helping forensic scientists solve cold cases, University of Florida doctoral student Ashley Sharpe created a map for determining the birthplace of ancient people and animals in Central America. Archaeologists will use the map to match lead found in bedrock from specific locations to a curious source: millennia-old teeth.

Ground rock and human and animal teeth are inserted into vials before the lead is extracted. 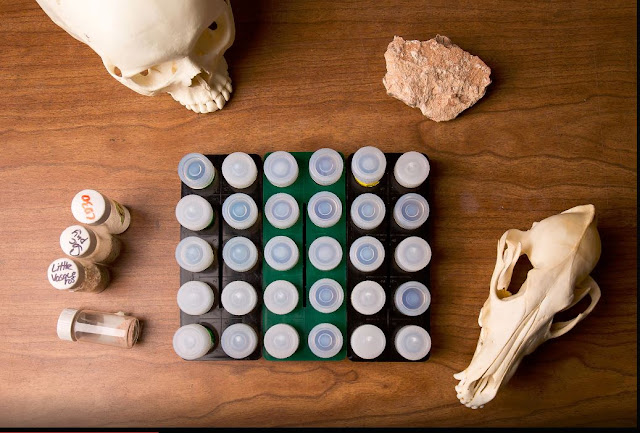 Pinpointing birth and death locations will help Sharpe and other archaeologists track the movement of prehistoric Maya and potentially solve mysteries surrounding the civilization's origins and eventual demise.

Sharpe sampled lead isotope values found in rocks, which act as local signatures, from the Chicxulub crater in the Yucatán Peninsula--the site of the asteroid impact that wiped out the dinosaurs--and places in Belize, Guatemala and Honduras. Details of the new study are described in the November issue of PLOS ONE.

"If I find an ancient Maya individual buried on the Yucatan in Mexico, I can do a chemical analysis of the lead in their teeth and discover a very different story," said Sharpe, who graduates from UF's department of anthropology and the environmental archaeology program at the Florida Museum of Natural History on the UF campus this fall. "Maybe they originally came from Guatemala. This can change our view of everything."

When our tooth enamel forms during childhood, it incorporates elements from the local environment, including the dust we breathe from rock layers beneath our feet. Bones, on the other hand, change every few years. And as we decompose, our bones soak up materials around the area we're buried like a sponge.

As the hardest substance in the human body, tooth enamel is different. It offers a window into life histories.

Tracing the movement of individuals via their teeth can offer clues about marriage alliances and slavery practices. Building knowledge of individual lives helps archaeologists figure out which villages were enemies, which were allies, and how the Maya communicated and traveled between cities. This could lead to a better understanding of how communication networks developed between Maya states, Sharpe said.

UF forensic anthropologists are using lead analysis to trace the birthplace of unidentified homicide victims, which can help police investigators narrow their search for missing persons to a particular state, country or region. Other archaeologists at UF have included lead analysis in research used to track ancient humans from the Indus Valley Civilization.

Rocks from the Chicxulub 'dinosaur crater' used to create a geological map for tracking humans and animals. 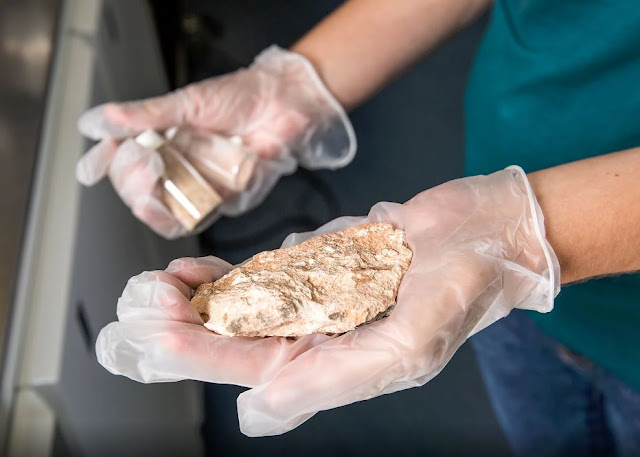 "The anthropology department here at UF is becoming a hub for lead-based research," Sharpe said. "In other words, we're the place to go if you need to track the origins an ancient or modern skeleton."

Researchers extract lead by first grinding up teeth, then inserting the particles into an inductively coupled plasma mass spectrometer. Temperatures inside the machine can be hotter than the sun, separating the lead.

If someone unearthed the remains of a native Floridian 1,000 years from now, the lead in their teeth would probably be the same as someone from across the country because we all breathe similar pollution, which contaminates the lead, said study co-author John Krigbaum, a biological anthropologist at UF.

"Back in prehistoric times, people were a product of the lands that they grew up on, the foods that they ate and the air they breathed," Krigbaum said. "That's also the case today."

Contacts and sources:
Ashley Sharpe
University of Florida
on November 18, 2016