Could 'Invisibility Cloaks' For Buildings Protect Them from Earthquakes?

Imperial College London researchers are developing large structures inspired by 'cloaking' materials for sound and light, which can offer protection against seismic waves.

Scientists have tried this by digging cylindrical pits at regular intervals in the soil. This ordered arrangement of boreholes scatters incoming destructive surface waves, causing them to interfere with each other and cancel out. 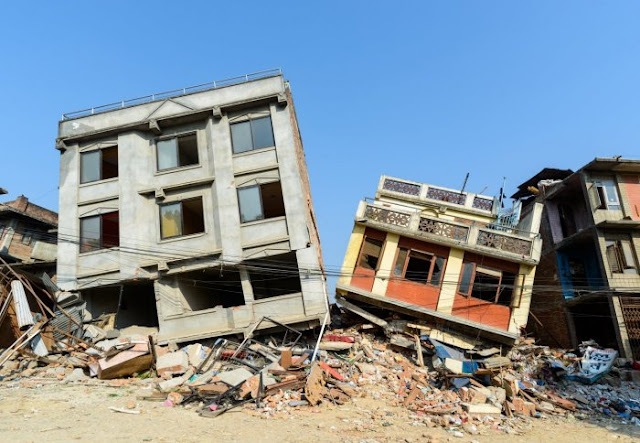 However, while the ground within the pattern is protected, the reflection of incoming waves causes greater destruction to the surrounding area. In addition, earthquakes produce very long wavelengths—so long that they could bypass the borehole shield without ever interacting with it.

Now, mathematicians at Imperial College London, with collaborators in France, are trying a different approach: using trees. Trees act as resonators, which osciallate at certain frequencies, even at long wavelengths. In the right arrangement, the interaction of resonating trees can redirect the energy of seismic waves deep into the soil, reducing damage.

This approach is based on metamaterials, artificial arrangements of resonators with unusual electromagnetic properties. Metamaterial ‘invisibility cloaks’ have already been used to make very small objects invisible to the eye by redirecting light waves. Now, large-scale versions could be created to emulate the resonance of trees and make buildings ‘invisible’ to earthquakes.

Professor Richard Craster, Head of the Department of Mathematics at Imperial, is part of the team looking into this phenomenon. “Wouldn’t it be great if we could surround a historic castle or a nuclear power station with a metamaterial, so that when the seismic waves come at it they are sent around or diverted into the ground. The building would remain perfectly still, not damaged. This is what we want to do,” he said.

Earlier this year, Dr Andrea Colombi, also from Imperial, with Professor Craster and collaborators in France, demonstrated that a dense forest behaves as a natural seismic metamaterial. By generating vibrations from a crane and measuring the effects with seismometers, they found that the resonating trees offer local protection against surface waves of certain frequencies.

In a natural forest, the researchers noted that the irregular height of trees and of the gaps between them offered protection against a larger range of frequencies than a uniform array would. If the trees are arranged by decreasing height, they would cover an even wider range of seismic frequencies. 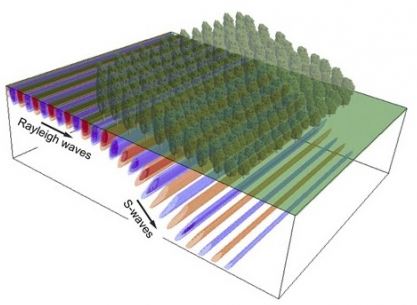 
Scientists call this a ‘metawedge’, which could eventually be created with real trees or poles acting as artificial resonators. Metawedges can only deal effectively with waves coming from two directions, but the researchers are hopeful they can find solutions to this.

There are also other potential applications for metawedges, for example using them to mask other kinds of vibrational waves that can impact buildings.

“Another thing we care about is, for example, the vibration coming from railway lines,” said Professor Craster. “We could put a metamaterial barrier between the train and the houses, so that the waves went down into the Earth or somewhere where we can dampen them.”

Seismic metamaterials have attracted the greatest enthusiasm among those looking for solutions to earthquake damage. Researchers in Italy are conducting similar experiments, with the resonators buried in the ground instead of thrusting out of it.

Professor Craster and his colleagues are also looking at how a system using boreholes could be made more effective. The team are patenting a version of this system that they claim will work even at seismic wavelengths.

“In some parts of the world there are very small scale but quite regular earthquakes,” he said. “Over the years this causes cracking in the houses. If you know where the waves typically come from you can condition the soil near those houses by putting down an array of boreholes, and they would simply reflect off into a field somewhere. Insurance companies would pay for this, the people in the houses might pay for this. I think engineering companies will be looking into this sort of thing.”