Cheap Artificial Muscles Made of Nylon

Artificial muscles — materials that contract and expand somewhat like muscle fibers do — can have many applications, from robotics to components in the automobile and aviation industries. Now, MIT researchers have come up with one of the simplest and lowest-cost systems yet for developing such “muscles,” in which a material reproduces some of the bending motions that natural muscle tissues perform.

The key ingredient, cheap and ubiquitous, is ordinary nylon fiber.

The new approach to harnessing this basic synthetic fiber material lies in shaping and heating the fibers in a particular way, which is described in a new paper in the journal Advanced Materials by Seyed Mirvakili, a doctoral candidate, and Ian Hunter, the George N. Hatsopoulos Professor in the Department of Mechanical Engineering. 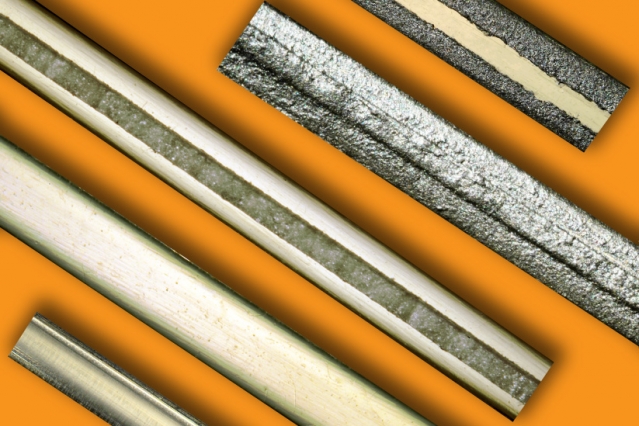 Previously, researchers had come up with the basic principle of using twisted coils of nylon filament to mimic basic linear muscle activity. They showed that for a given size and weight, such devices could extend and retract further, and store and release more energy, than natural muscles. But bending motions, such as those of human fingers and limbs, proved more challenging and had not yet been achieved in a simple and inexpensive system until the new work at MIT.

There are some existing materials that can be used to produce these kinds of bending motions, which could be useful for some biomedical devices or tactile displays. However, those tend to use “exotic materials to do the job, and they are very expensive and very difficult to make,” Mirvakili says. For example, carbon nanotube yarns can provide great longevity (more than a million linear contraction cycles) but are still too expensive for widespread use, and shape-memory alloys provide a strong contracting pull but have a poor cycle life (fewer than 1,000 cycles).

MIT researchers have come up with one of the simplest and lowest-cost systems yet for developing artificial muscles, in which a material reproduces some of the bending motions that natural muscle tissues perform. The key ingredient? Nylon fiber.

The new nylon-based system, by contrast, uses cheap material and a simple manufacturing process, and demonstrates very good cycling longevity. It all comes down to how the nylon fibers are shaped.

Some polymer fiber materials, including highly oriented nylon, have an unusual property: When heated, “they shrink in length but expand in diameter,” Mirvakili says, and this property has been harnessed to make some linear actuator devices. But to turn that linear shrinking motion into bending typically requires a mechanism such as a pulley and a takeup reel, adding extra size, complexity, and expense. The MIT team’s advance was to directly harness the motion without requiring extra mechanical parts.

One of the limitations on linear actuators made from such materials is that after being heated to trigger the contraction, they take some time to cool back down. “The cooling rate can be a limiting factor,” Mirvakili says. “But I realized it could be used to an advantage.” Selectively heating one side of the fiber, he says, causes that side to begin contracting faster than the heat can penetrate to the other side, and thus can produce a bending motion in the fiber. “You need a combination of these properties,” he says: “high strain [the pull of the shrinking motion] and low thermal conductivity.”

To make this system work effectively as an artificial muscle, the fiber’s cross-section needs to be carefully shaped. The team used ordinary nylon fishing line to start with, and compressed it to change its cross-section from round to rectangular or square. Then, selectively heating one side caused the fiber to bend in that direction. Changing the direction of the heating could also produce more complex motions; in their lab tests, the team used this heating technique to get the fibers to move in circles and figure-eights, and much more complex patterns of movement could easily be achieved, they say.

Various heat sources can be used on the fibers, including electric resistance heating, chemical reactions, or a laser beam that shines on the filament. For some of their tests, the researchers used a special conductive paint applied to the fibers and held in place by a resin binder; when a voltage was applied to the material, it selectively heated the portion of the fiber directly below the paint, causing the fiber to bend that way.

The researchers have demonstrated that the material can maintain its performance after at least 100,000 bending cycles, and can bend and retract at a speed of at least 17 cycles per second.

Hunter suggests that ultimately, applications for such fibers might include clothes that contract to adjust snugly to the contours of an individual body, drastically reducing the number of different sizes a manufacturer would need to produce, while improving the comfort and fit. Or, the fibers might be used in shoes that would tighten themselves when put on or adjust their stiffness and shape during each stride.

The system may also allow for self-adjusting catheters or other biomedical devices. And in the longer run, it could even lead to mechanical systems such as vehicle exterior panels that adjust their aerodynamic shape to adapt to changes in speed and wind conditions, or automatic tracking systems for solar panels that would use excess heat generated by the panels themselves to keep the panels aimed at the sun.

This method “is novel and elegant, with very good experimental data supported by appropriate physics-based models,” says Geoffrey Spinks, a professor at the University of Wollongong in Australia, who was not connected with this research. “This is a simple idea that works really well. The materials are inexpensive. The manufacturing method is simple and versatile. The method of actuation is by simple electrical input. The bending actuation performance is impressive in terms of bending angle, force generated, and speed.”

These are “exciting and game-changing findings,” adds Andrew Taberner, an associate professor of bioengineering at the University of Auckland in New Zealand, who also was not involved in this research. “One can imagine many applications for this type of actuator in the medical and instrumentation fields,” he says. “I expect that this work will become highly cited.”

Seyed Mirvakili was supported by the Natural Sciences and Engineering Research Council of Canada.