What would the paradise of Hawaii be without swaying coconut palms, with succulent fruit that is almost synonymous with the tropical island? Unfortunately, that may be the future of the island unless scientists find some way to stop the destructive Coconut Rhinoceros Beetle which feeds on the coconut palms, stripping them of their leaves and decimating the vegetation. A team of researchers at the University of Hawaii in Honolulu are using acoustics to help to understand this beetle, its habits and movements in order to protect the state’s valuable natural resources. 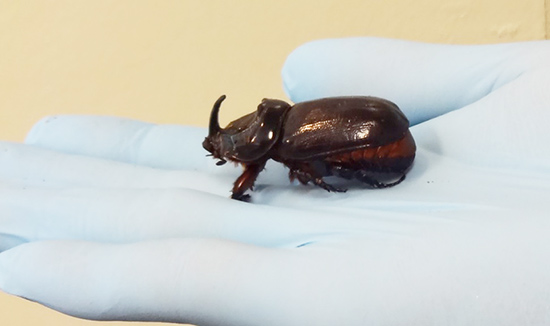 The Coconut Rhino Beetle is an invasive species that has plagued Hawaii since 2013. The goal of the state of Hawaii, with funding from the U.S. Department of Agriculture, is to eradicate the beetle before its devastating effects on the state's palm trees reach the level of destruction Guam experienced, where the trees were stripped of their leaves and significant amounts of vegetation were lost. The beetle has few known predators in Hawaii and the impacts on the agricultural and tourism industries to Hawaii could be devastating if left unmitigated.

It may not seem as though tracking and finding black beetles that can grow to three inches in length would be a challenge. But these beetles migrate only at night and finding a way to track their movement is critical.

“Stridulation, or chirping, sounds produced by the beetles have been reported with respect to mating and aggressive male behavior, and while previous studies proposed the mechanism and reported on some preliminary acoustic recording of the chirps, the chirp characteristics have not been examined extensively,” explained John Allen, a scientist at the University of Hawaii.

During the 172nd Meeting of the Acoustical Society of America and the 5th Joint Meeting with Acoustical Society of Japan, being held Nov. 28-Dec. 2, 2016, in Honolulu, Hawaii, Allen explained how the team expanded on previous work, combining acoustical, high speed optical and infrared camera measurements to determine mechanisms of sound generation for adult male and female beetles, as well as larvae, during their different stages of development. This kind of information could prove invaluable for tracking and mitigating the beetles’ migration.

"Obtaining a sufficient number of recordings for individual beetles has been difficult and we developed a triggering method for long-term recording from beetle movement or flight take-off," said Allen. "Field collection of acoustic data is also challenging since the beetles fly only at night and the sound is hard to detect above the ambient background noise."

Researchers are hopeful that they will be able to use acoustics to track the movement of beetles since other methods, such as optical, have had limited success.

“Since this beetle is more massive than other species, the acoustic frequency is less likely to be confused with [that of] other species,” said Allen. “We may be able to use passive detection using long term acoustic microphone recorders by characterizing their chirp signatures.”

In taking and analyzing data, the team revealed a novel harmonic structure not previously reported, and were able to create a spectrogram of a distress chirp. The chirps, and harmonics that appear, can indicate different behaviors ranging from distress to aggression. Whether this information can be used in tracking or anticipating beetle movement or behavior remains to be seen.