As Titan approaches its northern summer solstice, NASA’s Cassini spacecraft has revealed dramatic seasonal changes in the atmospheric temperature and composition of Saturn’s largest moon. Winter is taking a grip on the southern hemisphere and a strong vortex, enriched in trace gases, has developed in the upper atmosphere over the south pole. These observations show a polar reversal in Titan’s atmosphere since Cassini arrived at Saturn in 2004, when similar features were seen in the northern hemisphere.


“Cassini’s long mission and frequent visits to Titan have allowed us to observe the pattern of seasonal changes on Titan, in exquisite detail, for the first time,” says Dr. Athena Coustenis of the Observatoire de Paris, who presdented the results at the joint 48th meeting of the American Astronomical Society’s Division for Planetary Sciences and 11th European Planetary Science Congress. “We arrived at the northern mid-winter and have now had the opportunity to monitor Titan’s atmospheric response through two full seasons. Since the equinox, where both hemispheres received equal heating from the Sun, we have seen rapid changes.”

Slipping into shadow, the south polar vortex at Saturn's moon Titan still stands out against the orange and blue haze layers that are characteristic of Titan's atmosphere. Images like this, from NASA's Cassini spacecraft, lead scientists to conclude that the polar vortex clouds form at a much higher altitude -- where sunlight can still reach -- than the lower-altitude surrounding haze. 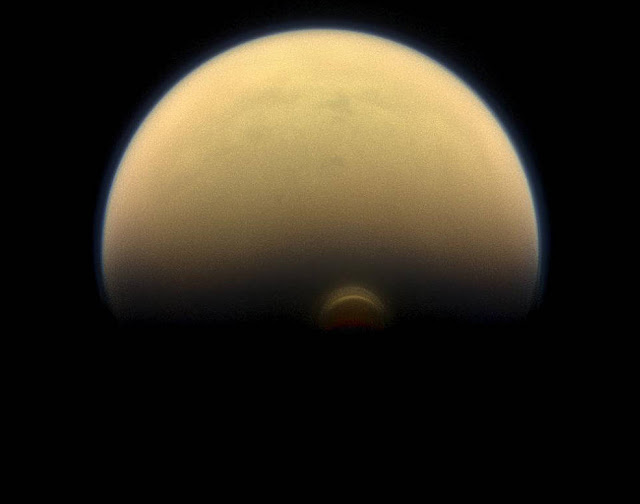 Heat is circulated through Titan’s atmosphere via a pole-to-pole cycle of warm gases upwelling at the summer pole and cold gases subsiding at the winter pole. Cassini’s observations have shown a large-scale reversal of this system immediately after the equinox in 2009.

Titan’s hemispheres have responded in different ways to these seasonal changes. The wintery effects have led to a temperature drop of 40 degrees Celsius in the southern polar stratosphere over the last four years. This contrasts with a much more gradual warming in the northern hemisphere, where temperatures remained stable during the early spring and have shown a 6-degree increase only since 2014.

Within months following the equinox, the vortex in the stratosphere over the south pole had become prominent, as had an atmospheric ‘hot spot’ at high altitudes. The corresponding features in the northern hemisphere had almost disappeared by 2011.

Inside the polar vortex over the increasingly shadowed south pole, there has been a rapid build-up of trace gases that accumulate in the absence of ultraviolet sunlight. These include complex hydrocarbons and nitriles such as methylacetylene and benzene, previously seen only at high northern latitudes.

This true color image captured by NASA'S Cassini spacecraft before a distant flyby of Saturn's moon Titan on June 27, 2012, shows a south polar vortex, or a swirling mass of gas around the pole in the atmosphere. 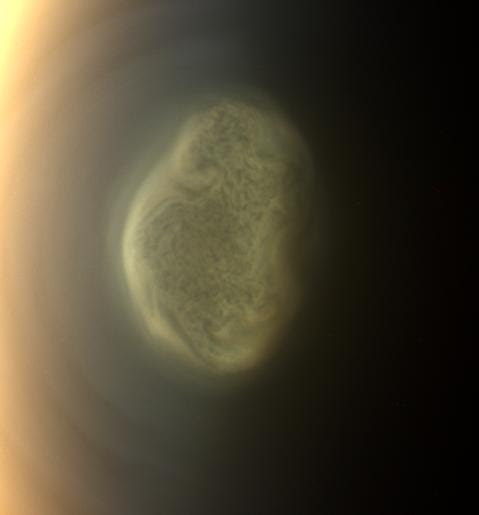 
Coustenis says, “We’ve had the chance to witness the onset of winter from the beginning and are approaching the peak time for these gas-production processes in the southern hemisphere. We are now looking for new molecules in the atmosphere above Titan’s south polar region that have been predicted by our computer models. Making these detections will help us understand the photochemistry going on.”

In the northern hemisphere, the trace gases have persisted well into summer. These are predicted to undergo a slow photochemical destruction, with species disappearing at different rates depending on their chemical lifetimes. However, since early 2016, a zone of depleted molecular gas and aerosols has developed across the entire northern hemisphere between an altitude of 400 and 500 kilometres, suggesting a complex dynamical effect starting at high altitudes in the atmosphere.

“As we count down to the end of the Cassini mission in September 2017, a consistent picture of Titan’s middle and upper atmospheres is emerging,” says Coustenis. “The 13-year total mission duration will in the end provide us with coverage of almost half a Titan year and provide an even deeper understanding of Titan’s seasonal variability.”