A group of citizen scientists and professional astronomers, including Carnegie's Jonathan Gagné, joined forces to discover an unusual hunting ground for exoplanets. They found a star surrounded by the oldest known circumstellar disk--a primordial ring of gas and dust that orbits around a young star and from which planets can form as the material collides and aggregates.

Led by Steven Silverberg of University of Oklahoma, the team described a newly identified red dwarf star with a warm circumstellar disk, of the kind associated with young planetary systems. Circumstellar disks around red dwarfs like this one are rare to begin with, but this star, called AWI0005x3s, appears to have sustained its disk for an exceptionally long time. The findings are published by The Astrophysical Journal Letters.

An artist's conception of this unusual system, a red dwarf star surrounded by the oldest known circumstellar disk -- a primordial ring of gas and dust that orbits around a young star and from which planets can form as the material collides and aggregates. 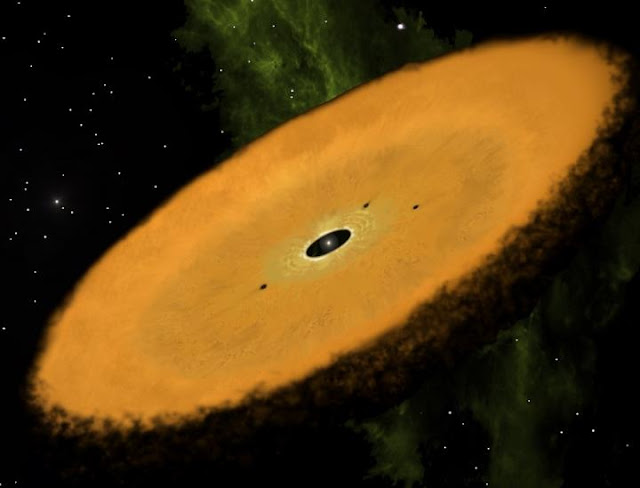 "Most disks of this kind fade away in less than 30 million years," said Silverberg. "This particular red dwarf is a candidate member of the Carina stellar association, which would make it around 45 million years old [like the rest of the stars in that group]. It's the oldest red dwarf system with a disk we've seen in one of these associations."

The discovery relied on citizen scientists from Disk Detective, a project led by NASA/GSFC's Dr. Marc Kuchner that's designed to find new circumstellar disks. At the project's website, DiskDetective.org, users make classifications by viewing ten-second videos of data from NASA surveys, including the Wide-field Infrared Survey Explorer mission (WISE) and Two-Micron All Sky Survey (2MASS) projects. Since the launch of the website in January 2014, roughly 30,000 citizen scientists have participated in this process, performing roughly 2 million classifications of celestial objects.

"Without the help of the citizen scientists examining these objects and finding the good ones, we might never have spotted this object," Kuchner said. "The WISE mission alone found 747 million [warm infrared] objects, of which we expect a few thousand to be circumstellar disks."

"Unraveling the mysteries of our universe, while contributing to the advancement of astronomy, is without a doubt a dream come true," says Hugo Durantini Luca from Argentina, one of eight citizen scientist co-authors.

Determining the age of a star can be tricky or impossible. But the Carina association, where this red dwarf was found, is a group of stars whose motions through the Galaxy indicate that they were all born at roughly the same time in the same stellar nursery.

Carnegie's Gagné devised a test that showed this newly found red dwarf and its disk are likely part of the Carina association, which was key to revealing its surprising age.

"It is surprising to see a circumstellar disk around a star that may be 45 million years old, because we normally expect these disks to dissipate within a few million years," Gagné explained. "More observations will be needed to determine whether the star is really as old as we suspect, and if it turns out to be, it will certainly become a benchmark system to understand the lifetime of disks."

Knowing that this star and its disk are so old may help scientists understand why M dwarf disks appear to be so rare.

This star and its disk are interesting for another reason: the possibility that it could host extrasolar planets. Most of the extrasolar planets that have been found by telescopes have been located in disks similar to the one around this unusual red dwarf. Moreover, this particular star is the same spectral type as Proxima Centauri, the Sun's nearest neighbor, which was shown to host at least one exoplanet, the famous Proxima b, in research published earlier this year.

Disk Detective is a collaboration between NASA, Zooniverse, the University of Oklahoma, the University of Cordoba (Argentina), the National Astronomical Observatory of Japan, the Space Telescope Science Institute, the Harvard-Smithsonian Center for Astrophysics, the Carnegie Institution of Washington, and the Korea Astronomy and Space Science Institute. To join the search for more planetary habitats, go to DiskDetective.org.

Contacts and sources:
Jonathan Gagné
The Carnegie Institution for Science
on October 21, 2016