The worrying results of Générations Futures EXPPERT survey 7 on a breakfast food, muesli, show the ubiquity of cocktails of hormone disrupting chemicals, also known as endocrine disrupting chemicals (EDCs) in the everyday environment. The findings highlight the need for the EU Commission to revise its recently proposed criteria to identify EDCs so that they become effective in protecting health.

Endocrine disruptors are "chemicals of natural or artificial foreign to the body that can interfere with the functioning of the endocrine system and thus induce deleterious effects on the body or on his descendants ."  The role of EDCs are suspected to date in the development of hormone-dependent cancers (breast, uterus, prostate and testes), but the available data do not confirm this link .

The EXPPERT 7 report addresses exposure to endocrine-disrupting pesticides (EDCs) in food eaten at breakfast, a meal considered essential. Food is one of the most important routes of exposure for anyone who is not regularly using pesticides.    Some EDCs are compounds soluble in fats (lipophilic), that is to say they bind to fat tissue, and can easily accumulate in the fats of different species and contaminate much of the food chain. Thus, the dose in the blood, adipose tissue, breast milk, amniotic fluid, cord blood or urine. 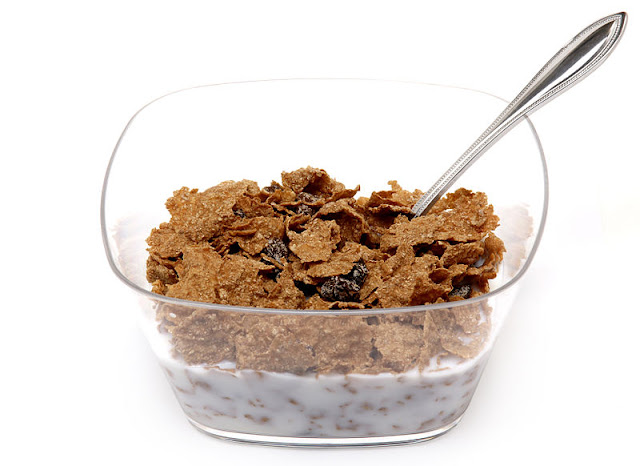 The study findings in France should prompt the European Commission to revise its criteria to define hormone disruptors.

The survey represents the seventh part in the EXPPERT series (EXposition aux Pesticides PERTurbateurs endocriniens) on endocrine-disrupting pesticides. It is an initiative of Générations Futures, France, in partnership with the Health and Environment Alliance (HEAL) and Pesticides Action Network Europe (PAN E).

EDC pesticides. EDCs are natural or artificial substances that are foreign to the human body. Exposure to these chemicals can interfere with the endocrine system and induce many adverse effects on an individual or on a person’s children or grandchildren. Many pesticides or biocides are either proven or strongly suspected to be EDCs.

Chart of found molecules, classified by presence in the samples and ranking of some of the tested cereals (partial list) 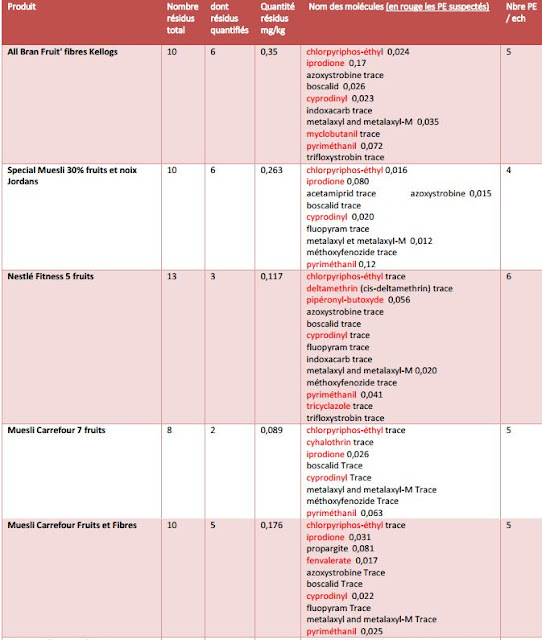 See Future Generations for full list
Act now. To demonstrate the urgency of preventive action in the field of endocrine disruption, Générations Futures has produced a series of reports based on surveys and research analyses showing the omnipresence of many endocrine disruptors in our environment, which results in significant human exposure (these are the EXPPERT reports).

A targeted report. The 7th Exppert Report looks at one of the most important ways people who are not pesticide users get exposed: through food. Breakfast should meet a quarter of the body’s daily energy needs. This meal should include cereals, mixtures of which can be found in muesli. Générations Futures therefore focused on this popular consumer product – buying and analysing 15 packets of non-organic and five packets of organic cereal or muesli with fruit (or similar additions).

Here are some of the results:

• In the 15 samples from non-organic packets tested, 141 residues were found, out of which the concentrations of 70 could be quantified. Of these 141 residues, 81 are suspected EDCs, equivalent to 57.44 percent of the total.

• Of the 70 non organic samples that could be quantified, the average concentration of residues was 0.177 mg/kg per sample. This level is 354 times higher than the maximum allowable concentration (MAC) tolerated in drinking water for all pesticides!

"Each new report by our association has demonstrated the urgency to act. These findings again reveal population exposure to too many pesticide residues that are suspected of being endocrine disruptors, which can act at very low doses," says Francois Veillerette, spokesperson for Générations Futures.

"In June, the EU Commission announced its proposed criteria for determining EDCs but this definition is far from what is needed to protect the population’s health. The ubiquity of cocktails of EDCs in the environment is confirmed by this report. The findings must be taken into account by the EU Commission, which should revise its criteria to make them truly protective," he concludes.