Stone Tool Making So Easy Monkeys Are Doing It in Brazil?

Researchers have observed wild-bearded capuchin monkeys in Brazil deliberately break stones, unintentionally creating flakes that share many of the characteristics of those produced by early Stone Age hominins. The difference is that the capuchins' flakes are not intentional tools for cutting and scraping, but seem to be the by-product of hammering or 'percussive behavior' that the monkeys engage in to extract minerals or lichen from the stones.

In a paper, published in Nature, the research team says this finding is significant because archaeologists had always understood that the production of multiple stone flakes with characteristics such as conchoidal fractures and sharp cutting edges was a behavior unique to hominins. The paper suggests that scholars may have to refine their criteria for identifying intentionally produced early stone flakes made by hominins, given capuchins have been observed unintentionally making similar tools.

The research is authored by researchers from the University of Oxford, University College London and University of São Paulo in Brazil. The team observed individual monkeys in Serra da Capivara National Park unintentionally creating fractured flakes and cores. While hominins made stone flake tools for cutting and butchery tasks, the researchers admit that it is unclear why monkeys perform this behaviour. They suggest that the capuchins may be trying to extract powdered silicon (known to be an essential trace nutrient) or to remove lichen for some as yet unknown medicinal purpose. At no point did the monkeys try to cut or scrape using the flakes, says the study.

Lead author Dr Tomos Proffitt, from the School of Archaeology at the University of Oxford, comments: 'Within the last decade, studies have shown that the use and intentional production of sharp-edged flakes are not necessarily linked to early humans (the genusHomo) who are our direct relatives, but instead were used and produced by a wider range of hominins. However, this study goes one step further in showing that modern primates can produce archaeologically identifiable flakes and cores with features that we thought were unique to hominins.

'This does not mean that the earliest archaeological material in East Africa was not made by hominins. It does, however, raise interesting questions about the possible ways this stone tool technology developed before the earliest examples in the archaeological record appeared. It also tells us what this stone tool technology might look like. There are important questions too about the uniqueness of early hominin behavior. These findings challenge previous ideas about the minimum level of cognitive and morphological complexity required to produce numerous conchoidal flakes.' 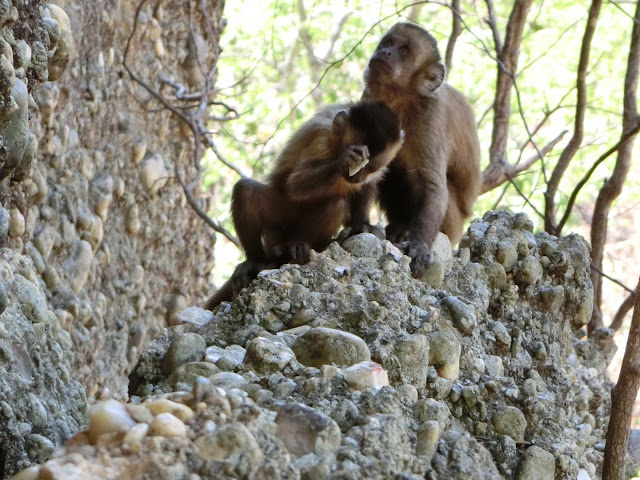 The monkeys were observed engaging in 'stone on stone percussion', whereby they individually selected rounded quartzite cobbles and then using one or two hands struck the 'hammer-stone' forcefully and repeatedly on quartzite cobbles embedded in a cliff face. This action crushed the surface and dislodged cobbled stones, and the hand-held 'hammer stones' became unintentionally fractured, leaving an identifiable primate archaeological record. As well as using the active hammer-stone to crush 'passive hammers' (stones embedded in the outcrop), the capuchins were also observed re-using broken hammer-stones as 'fresh' hammers.


The research team examined 111 fragmented stones collected from the ground immediately after the capuchins had dropped them, as well as from the surface and excavated areas in the site. They gathered complete and broken hammer-stones, complete and fragmented flakes and passive hammers. Around half of the fractured flakes exhibited conchoidal fracture, which is typically associated with the hominin production of flakes.

Bearded capuchins and some Japanese macaques are known to pound stones directly against each other, but the paper remarks that the capuchins in Serra da Capivara National Park are the only wild primates to be observed doing this for the purpose of damaging the stones.

Co-author and leader of the Primate Archaeology (Primarch) project Michael Haslam, from the University of Oxford, says: 'Our understanding of the new technologies adopted by our early ancestors helps shape our view of human evolution. The emergence of sharp-edged stone tools that were fashioned and hammered to create a cutting tool was a big part of that story. The fact that we have discovered monkeys can produce the same result does throw a bit of a spanner in the works in our thinking on evolutionary behavior and how we attribute such artefacts. While humans are not unique in making this technology, the manner in which they used them is still very different to what the monkeys seem capable of.'