The eerie glow of a dead star, which exploded long ago as a supernova, reveals itself in this NASA Hubble Space Telescope image of the Crab Nebula. But don't be fooled. The ghoulish-looking object still has a pulse. Buried at its center is the star's tell-tale heart, which beats with rhythmic precision.

Astronomers discovered a real "tell-tale heart" in space, 6,500 light-years from Earth. The "heart" is the crushed core of a long-dead star, called a neutron star, which exploded as a supernova and is now still beating with rhythmic precision. Evidence of its heartbeat are rapid-fire, lighthouse-like pulses of energy from the fast-spinning neutron star. The stellar relic is embedded in the center of the Crab Nebula, the expanding, tattered remains of the doomed star. 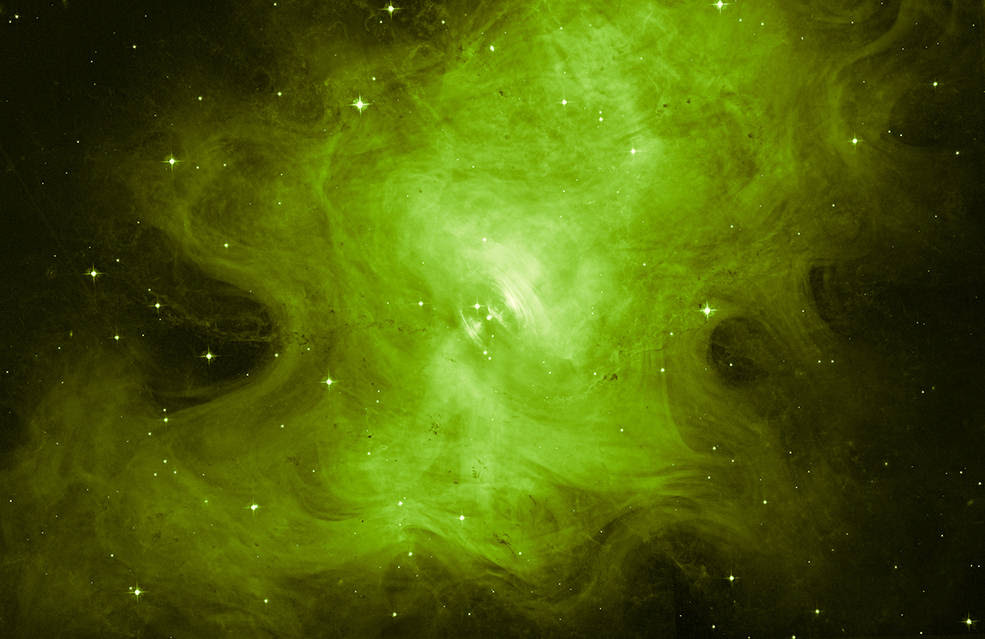 The "heart" is the crushed core of the exploded star. Called a neutron star, it has about the same mass as the sun but is squeezed into an ultra-dense sphere that is only a few miles across and 100 billion times stronger than steel. The tiny powerhouse is the bright star-like object near the center of the image.

This time-lapse movie of the Crab Nebula, made from NASA Hubble Space Telescope observations, reveals wave-like structures expanding outward from the "heart" of an exploded star. The waves look like ripples in a pond. The heart is the crushed core of the exploded star, or supernova. Called a neutron star, it has about the same mass as the sun but is squeezed into an ultra-dense sphere that is only a few miles across and 100 billion times stronger than steel.  The movie is assembled from 10 Hubble exposures taken between September and November 2005 by the Advanced Camera for Surveys.

This surviving remnant is a tremendous dynamo, spinning 30 times a second. The wildly whirling object produces a deadly magnetic field that generates an electrifying 1 trillion volts. This energetic activity unleashes wisp-like waves that form an expanding ring, most easily seen to the upper right of the pulsar.  The bright object to the left of the neutron star is a foreground or background star.

The nebula's hot gas glows in radiation across the electromagnetic spectrum, from radio to X-rays. The Hubble exposures were taken in visible light as black-and-white exposures. The Advanced Camera for Surveys made the observations between January and September 2012. The green hue that gives the nebula a Halloween theme, represents the color range of filter used in the observation..

The Crab Nebula is one of the most historic and intensively studied supernova remnants. Observations of the nebula date back to 1054 A.D., when Chinese astronomers first recorded seeing a "guest star" during the daytime for 23 days. The star appeared six times brighter than Venus. Japanese, Arabic, and Native American stargazers also recorded seeing the mystery star.

In 1758, while searching for a comet, French astronomer Charles Messier discovered a hazy nebula near the location of the long-vanished supernova. He later added the nebula to his celestial catalog as "Messier 1," marking it as a "fake comet." Nearly a century later British astronomer William Parsons sketched the nebula. Its resemblance to a crustacean led to M1's other name, the Crab Nebula. In 1928 astronomer Edwin Hubble first proposed associating the Crab Nebula to the Chinese "guest star" of 1054.

The nebula, bright enough to be visible in amateur telescopes, is located 6,500 light-years away in the constellation Taurus.