A rare triple-star system surrounded by a disk with a spiral structure has been discovered by a University of Oklahoma-led research team. Recent observations from the Atacama Large Millimeter/submillimeter Array -- a revolutionary observatory in northern Chile, commonly known as ALMA -- resulted in the discovery, lending support for evidence of disk fragmentation -- a process leading to the formation of young binary and multiple star systems. Until ALMA, no one had observed a tri-star system forming in a disk like the one discovered by the OU team.

ALMA captured the image of the tri-system and the disk material around the stars and the spiral arms. The system spans a region about five times the size of our own solar system. 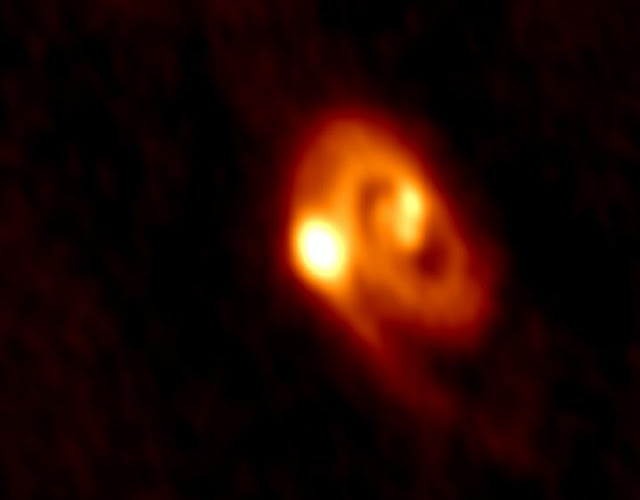 Credit: University of Oklahoma and ALMA

"What is important is that we discovered that companion stars can form in disk material surrounding a dominant star," said Tobin. "We had observed this system in the past with ALMA's predecessors, but this is the first time we have been able to clearly analyze the disk and the newborn stars within it. ALMA revealed the spiral arms and disk that led to the formation of the tri-star system. Triple systems like this one are rare, and this is the only one with a configuration like this, but we are actively searching for more."

How binary stars form has been a mystery for some time, and there are different theories about how they form--one is the fragmentation of the disk around the stars that are forming. Tobin explains the formation of the disk in which the tri-star system is forming is like a figure skater doing a spin and pulls his or her arms in to gather speed. A star initially forms from a cloud of interstellar gas that is collapsing under its own gravity. The spin from the cloud causes a disk to form as the material spins faster and falls toward the star. If the disk happens to have enough material, spiral arms form and the disk can fragment to another star.