As we push the limits of agriculture to feed more people in a warmer world, we do not understand how plants sense temperature.

In a surprising turn of events scientists at the University of Buenos Aires in Argentina and Washington University in St. Louis have just learned that plant light sensors also respond to temperature.

Plants contain specialized light-sensitive proteins that change shape when they absorb light, much as do the photopigments in the human eye. All plants have three main red-light photoreceptors, called phytochrome A, B and C.

Phytochrome mutants grow very differently from wild type plant (upper left) under the same conditions. Work with these mutants reveals that phytochrome is both a light and temperature sensor. 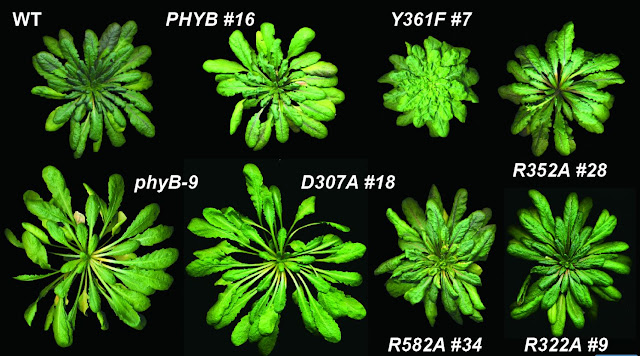 As part of an effort to create plants that can tolerate different growth conditions, Richard Vierstra the George and Charmaine Mallinckrodt Professor in Arts & Sciences at Washington University in St. Louis has been developing a library of phytochrome B mutants, including ones that are much more or less sensitive to light than the wild type plant.

To better understand their mutant plants, the Vierstra lab shared them with Jorge J. Casal lab in Argentina where doctoral student Martina Legris grew them under a wide variety of carefully controlled conditions.

"We got 'weird' results that couldn't be explained unless the phytochrome we were working with was sensitive to temperature as well as light," Vierstra said.

As the temperature rose, some plants exposed to constant sunlight generate less of the biologically active form of phytochrome B--not more, as you'd expect.

The findings will be published in the Oct. 27 issue of Science, together with a companion paper also on plant temperature sensors by a lab at the University of Cambridge in England.

A switch with the jitters

This clever little system is able to detect many different qualities of light, including the light intensity (encoded in the speed at which the molecule bounces from one form to another), and the color of the light (encoded by the ratio of the Pfr form to the Pr form). Intensity tells a seed when to emerge from the soil and color tells the seeding when to grow tall to avoid shade.

"The beauty of this is you can purify the phytochromes, put them in a test tube and watch them switch forms simply by shining red or far-red light on the solutions," Vierstra said. "So they're not figments of our imagination."

An hour glass that runs too fast

But this description leaves out one conversion. Pfr can convert to Pr by absorbing far-red light but also by a process called thermal reversion, which occurs without light.

People thought thermal reversion worked like an hour glass, Vierstra said. As soon as the sun set, the hour glass started running, and Pfr started trickling back to the Pr form. The amount of Pfr at the end of the night then told the plant how long the night was.

This is important because the length of night varies with the season, especially away from the Equator. So changes in day (and night) length helps plants to tell where they are in the seasonal cycle, which in turn helps them to flower in the right season.

Nobody had been able to test the idea that thermal reversion was an hourglass, or timer, however. But as they were tinkering with phytochrome B, the Vierstra lab made phytochrome mutants that were fast reverters and ones that were slow reverters. And these mutants were among those that traveled to Argentina.

When they grew the plants, the Casals lab got strange results they could understand only if thermal reversion is much faster than anyone realized; and only if the rate of reversion is very sensitive to temperature. In other words, the only possible interpretationwas that phytochrome B in the wild type (unmodified) plant is a temperature as well as light sensor.

"The plant is looking for Pfr, which tells it the light is on," said Vierstra. "In sunlight a plant slowly makes more and more Pfr until the reaction that converts Pr to Pfr saturates. But as the temperature rises, the thermal reversion starts running so fast, the plants accumulate relatively little Pfr.

"You would expect that at higher temperatures the Pr -> Pfr reaction would go faster," Vierstra said, "and it probably does, but thermal reversion goes even faster. It erases the light signal because the reversion reaction is more sensitive to temperature than the one creating the light signal.

"You can predict what this will do as temperature rises," Vierstra said. "Plants that make lots of Pfr are short, intensely green and happy. But thermal reversion will draw down the Pfr at higher temperatures, so that plants will respond as if they are in the dark (even though they are in the light) and grow tall and leggy."

"We don't yet know right now whether it's just phytochrome B that's a temperature sensor," Vierstra said. So right now members of his team, including Research Scientist Sethe Burgie, are trying to get accurate measurement on the other phytochromes. “Once we have this figured out, we could make mutants that are less or more sensitive to temperature by modifying thermal reversion."

Coming in from the cold

"Phytochromes are the worst to work on," Vierstra said. "You have to spend four days in the dark to purify them. They are incredibly unstable, they are present at very low levels, and they have got all kinds of variants. And unlike most other proteins, their amino-acid sequences also don’t tell us how phytochromes work.

"So when people purify phytochromes, they want to keep the proteins as happy as possible and that means keeping them as cold as possible. All the experiments are done on ice!

“And that's why we didn't realize until now that phytochromes could act as temperature sensors!”

Contacts and sources:
Washington University in St. Louis
on October 27, 2016