After investigating the upper atmosphere of the Red Planet for a full Martian year, NASA’s MAVEN mission has determined that the escaping water does not always go gently into space.

Sophisticated measurements made by a suite of instruments on the Mars Atmosphere and Volatile Evolution, or MAVEN, spacecraft revealed the ups and downs of hydrogen escape – and therefore water loss. The escape rate peaked when Mars was at its closest point to the sun and dropped off when the planet was farthest from the sun. The rate of loss varied dramatically overall, with 10 times more hydrogen escaping at the maximum.

“MAVEN is giving us unprecedented detail about hydrogen escape from the upper atmosphere of Mars, and this is crucial for helping us figure out the total amount of water lost over billions of years,” said Ali Rahmati, a MAVEN team member at the University of California at Berkeley who analyzed data from two of the spacecraft’s instruments.


This image shows atomic hydrogen scattering sunlight in the upper atmosphere of Mars, as seen by the Imaging Ultraviolet Spectrograph on NASA’s Mars Atmosphere and Volatile Evolution mission. About 400,000 observations, taken over the course of four days shortly after the spacecraft entered orbit around Mars, were used to create the image. Hydrogen is produced by the breakdown of water, which was once abundant on Mars' surface. Because hydrogen has low atomic mass and is weakly bound by gravity, it extends far from the planet (the darkened circle) and can readily escape. 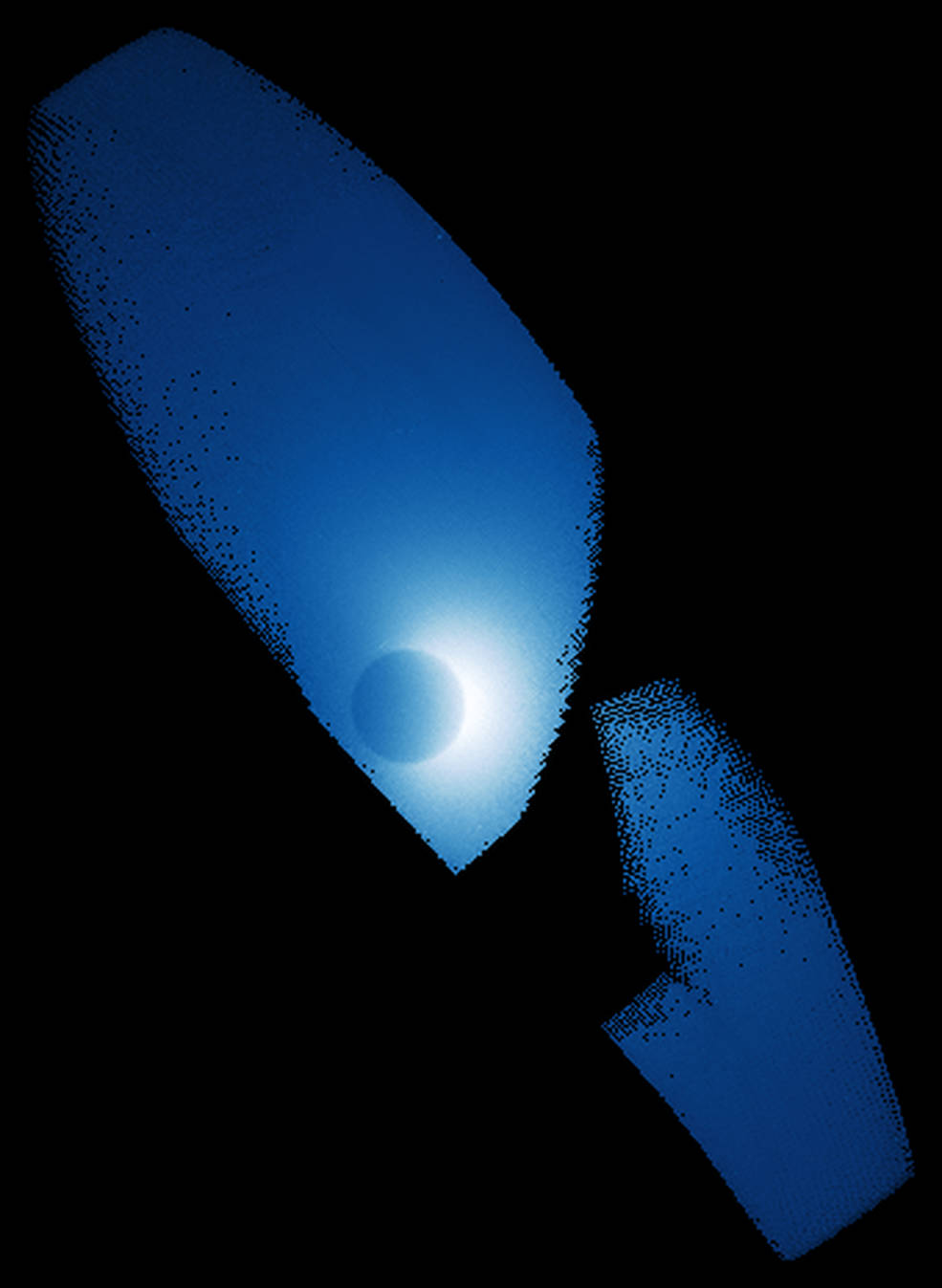 
This loss had long been assumed to be more-or-less constant, like a slow leak in a tire. But previous observations made using NASA’s Hubble Space Telescope and ESA’s Mars Express orbiter found unexpected fluctuations. Only a handful of these measurements have been made so far, and most were essentially snapshots, taken months or years apart. MAVEN has been tracking the hydrogen escape without interruption over the course of a Martian year, which lasts nearly two Earth years.

“Now that we know such large changes occur, we think of hydrogen escape from Mars less as a slow and steady leak and more as an episodic flow – rising and falling with season and perhaps punctuated by strong bursts,” said Michael Chaffin, a scientist at the University of Colorado at Boulder who is on the Imaging Ultraviolet Spectrograph (IUVS) team. Chaffin is presenting some IUVS results on Oct. 19 at the joint meeting of the Division for Planetary Sciences and the European Planetary Science Congress in Pasadena, California.

In the most detailed observations of hydrogen loss to date, four of MAVEN’s instruments detected the factor-of-10 change in the rate of escape. Changes in the density of hydrogen in the upper atmosphere were inferred from the flux of hydrogen ions – electrically charged hydrogen atoms – measured by the Solar Wind Ion Analyzer and by the Suprathermal and Thermal Ion Composition instrument. IUVS observed a drop in the amount of sunlight scattered by hydrogen in the upper atmosphere. MAVEN’s magnetometer found a decrease in the occurrence of electromagnetic waves excited by hydrogen ions, indicating a decrease in the amount of hydrogen present.

By investigating hydrogen escape in multiple ways, the MAVEN team will be able to work out which factors drive the escape. Scientists already know that Mars’ elliptical orbit causes the intensity of the sunlight reaching Mars to vary by 40 percent during a Martian year. There also is a seasonal effect that controls how much water vapor is present in the lower atmosphere, as well as variations in how much water makes it into the upper atmosphere. The 11-year cycle of the sun’s activity is another likely factor.

“In addition, when Mars is closest to the sun, the atmosphere becomes turbulent, resulting in global dust storms and other activity. This could allow the water in the lower atmosphere to rise to very high altitudes, providing an intermittent source of hydrogen that can then escape,” said John Clarke, a Boston University scientist on the IUVS team. Clarke will present IUVS measurements of hydrogen and deuterium – a form of hydrogen that contains a neutron and is heavier – on Oct. 19 at the planetary conference.

By making observations for a second Mars year and during different parts of the solar cycle, the scientists will be better able to distinguish among these effects. MAVEN is continuing these observations in its extended mission, which has been approved until at least September 2018.

“MAVEN’s findings reveal what is happening in Mars’ atmosphere now, but over time this type of loss contributed to the global change from a wetter environment to the dry planet we see today,” said Rahmati.

MAVEN’s principal investigator is based at the University of Colorado’s Laboratory for Atmospheric and Space Physics, Boulder. The university provided two science instruments and leads science operations, as well as education and public outreach, for the mission. NASA’s Goddard Space Flight Center in Greenbelt, Maryland, manages the MAVEN project and provided two science instruments for the mission. Lockheed Martin built the spacecraft and is responsible for mission operations. The University of California at Berkeley’s Space Sciences Laboratory also provided four science instruments for the mission. NASA’s Jet Propulsion Laboratory in Pasadena, California, provides navigation and Deep Space Network support, as well as the Electra telecommunications relay hardware and operations.