Hydrogen is often described as the fuel of the future, especially for application in hydrogen powered fuel-cell vehicles (HFCV’s). However, its widespread implementation in this role has been thwarted by the lack of a lightweight, safe, on-board hydrogen storage material. A hydrogen economy relates to the energetic, economic and environmental ramifications of using hydrogen, rather than electricity, as a primary vector of energy transportation.

An international team of researchers has now shown a "benign, readily-available hydrocarbon wax that is capable of rapidly releasing large amounts of hydrogen through microwave-assisted catalytic decomposition. This discovery offers a new material and system for safe and efficient hydrogen storage and could facilitate its application in a HFCV. Importantly, hydrogen storage materials made of wax can be manufactured through completely sustainable processes utilizing biomass or other renewable feedstocks."

The major new discovery by scientists at the universities of Oxford, Cambridge and Cardiff in the UK, and the King Abdulaziz City for Science and Technology (KACST) in Saudi Arabia, demonstrates a hydrocarbon wax that rapidly releases large amounts of hydrogen when activated with catalysts and microwaves.

This discovery of a potential safe storage method, reported in the Nature journal Scientific Reports, could pave the way for widespread adoption of hydrogen-fueled cars. 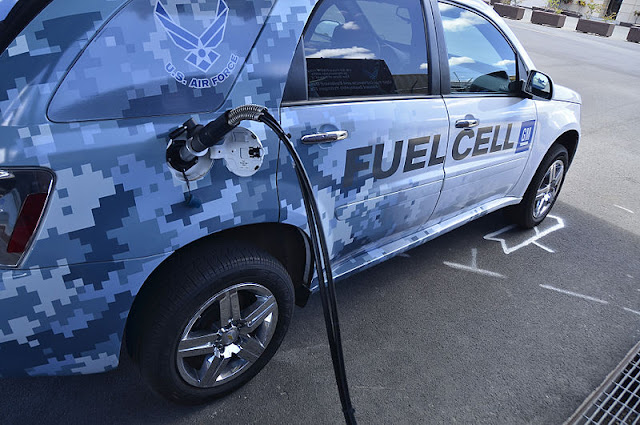 Study co-author Professor Peter Edwards, who leads the KACST-Oxford Petrochemical Research Centre (KOPRC), a KACST Centre of Excellence in Petrochemicals at Oxford University, said: 'This discovery of a safe, efficient hydrogen storage and production material can open the door to the large-scale application of fuel cells in vehicles.'

Co-author Dr Tiancun Xiao, a senior research fellow at Oxford University, said: 'Our discovery – that hydrogen can be easily and instantly extracted from wax, a benign material that can be manufactured from sustainable processes – is a major step forward. Wax will not catch fire or contaminate the environment. It is also safe for drivers and passengers.'

Co-author Professor Hamid Al-Megren, from the Materials Research Institute at KACST, said: 'This is an exciting development – it will allow society to utilise fossil fuels or renewable-derived wax to generate on-board hydrogen for fuel cell applications without releasing any carbon dioxide into the air.'

Hydrocarbons are natural, hydrogen-rich resources with well-established infrastructures. The research team has developed highly selective catalysts with the assistance of microwave irradiation, which can extract hydrogen from hydrocarbons instantly through a non-oxidative dehydrogenation process. This will help unlock the longstanding bottleneck hindering the widespread adoption of hydrogen fuel technology.

Co-author Professor Angus Kirkland, from the Department of Materials at Oxford University and Science Director at the new electron Physical Science Imaging Centre (ePSIC) at Harwell Science and Innovation Campus, described the breakthrough as an exemplar of how Oxford is able to respond to key academic and industrial problems by using interdisciplinary resources and expertise.

Co-author Professor Sir John Meurig Thomas, from the Department of Materials Science and Metallurgy at the University of Cambridge, said the work could be extended so that many of the liquid components of refined petroleum and inexpensive solid catalysts can pave the way for the generation of massive quantities of high-purity hydrogen for other commercial uses, including CO2-free energy production.

Professor Edwards added: 'Instead of burning fossil fuels, leading to CO2, we use them to generate hydrogen, which with fuel cells produces electric power and pure water. This is the future – transportation without CO2 and hot air.'