Inside A Mysterious Giant Space Blob A Galaxy Gestates

Scientists have witnessed galaxies forming inside a mysterious giant space blob, which will one day form the heart of a giant galaxy cluster.

Lyman-alpha Blobs (LABs) are gigantic clouds of hydrogen gas that can span hundreds of thousands of light years. Their structure looks relatively simple, but they glow far more brightly than might be expected. 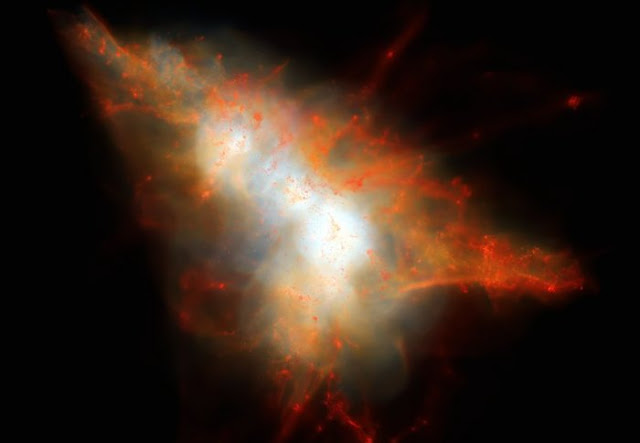 
What causes the bright glow has been a mystery for 15 years, but now, scientists have confirmed that two galaxies are forming within the largest ever Lyman-alpha Blob yet discovered – LAB-1. Using an advanced telescope, the researchers have deduced that the blob is creating stars over 100 times faster than the Milky Way. It is this frenzy of star formation that lights up the surrounding blob.

Key: 1) Central starburst galaxies, detected with ALMA. 2) Surrounding satellite – Low mass companions. Most of these are too faint to detect directly. 3) Central galaxies are emitting Lyman-alpha (Ly-α) photons from star formation. 4) The photons scatter off clouds of cold gas in the circumgalactic medium. Most of the cold gas is around satellites. 5) Scattered Ly-α escapes to our line of sight, giving rise to extended blob. 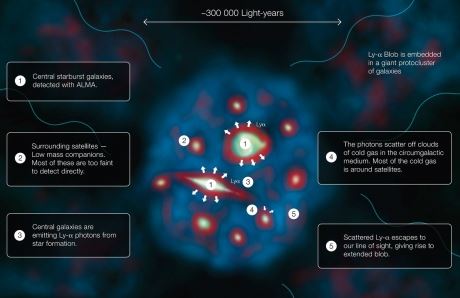 
LAB-1, or SSA22-LAB 1, was first seen in 2000. It was the first LAB to be discovered, and is located so far away that its light has taken 11.5 billion years to reach us. Measuring 300,000 light years across, LAB-1 is three times larger than the Milky Way, and this research shows for the first time that it is powered by elliptical galaxies at its centre.

A team led by the University of Hertfordshire, and including researchers from Imperial College London, used the Atacama Large Millimeter/Submillimeter Array (ALMA), an array of telescopes with unparalleled ability to observe light from dust clouds in distant galaxies to peer deeply into LAB-1. This allowed them to pinpoint several sources of radiation and light within the space blob, where they spotted the two young, growing elliptical galaxies.

The team, part of the JCMT Legacy Survey, then combined the ALMA images with observations from the Multi Unit Spectroscopic Explorer (MUSE) instrument mounted on the European Southern Observatory (ESO)’s Very Large Telescope (VLT). This maps the light that is emitted from the blob, known as Lyman-alpha light and it showed that the sources of light are the forming stars in the very heart of the Lyman-alpha Blob.

Co-author Dr Dave Clements from the Department of Physics at Imperial College London, said: “What’s exciting about this is that elliptical galaxies usually live in the centre of galaxy clusters, so what we’ve found here could eventually form the centre of a giant galaxy cluster. Deep imaging with the NASA/ESA Hubble Space Telescopeand the W. M. Keck Observatory did indeed show that the young galaxies are surrounded by companion galaxies that could be providing the central galaxies with material, helping to drive their high star formation rates and lending weight to this theory.”

This video zoom sequence starts with a wide-field view of the dim constellation of Aquarius (The Water Carrier) and slowly closes in on one of the largest known single objects in the Universe, the Lyman-alpha blob LAB1. Observations with the ESO VLT show, for the first time, that the giant “blob” must be powered by galaxies embedded within the cloud.

LABs are bright but have a murky glow. The team used a galaxy formation simulator to show the glow might come from ultraviolet light being scattered and bouncing off surrounding hydrogen gas, as a result of the star formation.

Lead author Dr James Geach from the Centre for Astrophysics Research at the University of Hertfordshire, explained: “Think of a streetlight on a foggy night — you see the diffuse glow because light is scattering off the tiny water droplets. A similar thing is happening here, except the streetlight is an intensely star-forming galaxy and the fog is a huge cloud of intergalactic gas. The galaxies are illuminating their surroundings.”

Dr Clements concluded: “These blobs have been a mystery for a long time, but thanks to this large collaboration between experts and a variety of telescopes, we think we have solved a 15-year-old mystery: Lyman-alpha Blob-1 is the site of formation of a massive elliptical galaxy that will one day be the heart of a giant cluster. We are seeing a snapshot of the assembly of that galaxy 11.5 billion years ago.”