If You Could See Radio Waves: GLEAM Images The Sky in Amazing Radio Technicolor

Published today in the Monthly Notices of the Royal Astronomical Society, the GaLactic and Extragalactic All-sky MWA, or ‘GLEAM’ survey, has produced a catalogue of 300,000 galaxies observed by the Murchison Widefield Array (MWA), a $50 million radio telescope located at a remote site northeast of Geraldton. 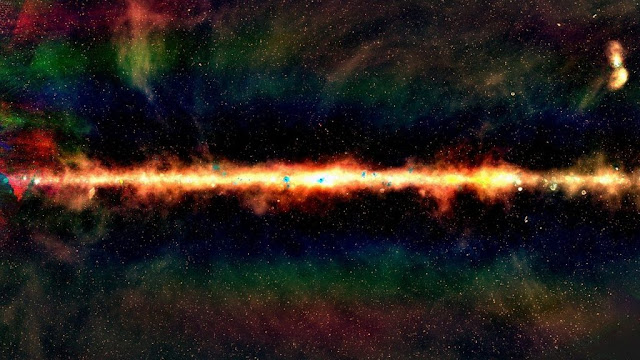 
Lead author Dr Natasha Hurley-Walker, from Curtin University and the International Centre for Radio Astronomy Research (ICRAR), said this is the first radio survey to image the sky in such amazing technicolour.

“GLEAM does rather better than that, viewing the sky in 20 primary colours.

“That’s much better than we humans can manage, and it even beats the very best in the animal kingdom, the mantis shrimp, which can see 12 different primary colours,” she said.


A ‘radio colour’ view of the sky above a ‘tile’ of the Murchison Widefield Array radio telescope, located in outback Western Australia. The Milky Way is visible as a band across the sky and the dots beyond are some of the 300,000 galaxies observed by the telescope for the GLEAM survey. Red indicates the lowest frequencies, green the middle frequencies and blue the highest frequencies.


GLEAM is a large-scale, high-resolution survey of the radio sky observed at frequencies from 70 to 230 MHz, observing radio waves that have been travelling through space—some for billions of years.

“Our team are using this survey to find out what happens when clusters of galaxies collide,” Dr Hurley-Walker said.

Narrated by Dr Natasha Hurley-Walker, this unique timelapse movie shows the sky above a ‘tile’ of the Murchison Widefield Array radio telescope, located in outback Western Australia. The ‘normal’ optical sky transitions to a view of the sky at radio wavelengths. The Milky Way is visible as a band across the sky and the dots beyond are some of the 300,000 galaxies observed by the telescope for the GLEAM survey.
Credit: Radio image by Dr Natasha Hurley-Walker (ICRAR/Curtin) and the GLEAM Team. MWA tile and landscape by Dr John Goldsmith / Celestial Visions.

“We’re also able to see the remnants of explosions from the most ancient stars in our galaxy, and find the first and last gasps of supermassive black holes.”

MWA Director Associate Professor Randall Wayth, from Curtin University and ICRAR, said GLEAM is one of the biggest radio surveys of the sky ever assembled.

A spherical view of the GLEAM survey, showing how it covers the entire southern sky. Red indicates the lowest frequencies, green the middle frequencies and blue the highest frequencies.
Credit: Natasha Hurley-Walker (ICRAR/Curtin), Lister Staveley-Smith (ICRAR/UWA) and the GLEAM Team.
“The area surveyed is enormous,” he said. “Large sky surveys like this are extremely valuable to scientists and they’re used across many areas of astrophysics, often in ways the original researchers could never have imagined,” Associate Professor Wayth said.

Completing the GLEAM survey with the MWA is a big step on the path to SKA-low, the low frequency part of the international Square Kilometre Array (SKA) radio telescope to be built in Australia in the coming years.


A short video about radio waves and the electromagnetic spectrum presented by astrophysicist Dr Luke Davies from the International Centre for Radio Astronomy Research in Perth, Western Australia.


“It’s a significant achievement for the MWA telescope and the team of researchers that have worked on the GLEAM survey,” Associate Professor Wayth said.

“The survey gives us a glimpse of the Universe that SKA-low will be probing once it’s built. By mapping the sky in this way we can help fine-tune the design for the SKA and prepare for even deeper observations into the distant Universe.”

GLEAM is the new all-sky survey from the Murchison Widefield Array telescope in Western Australia.Based on Chromoscope, GLEAMoscope lets you explore our Galaxy (the Milky Way) and the distant Universe in a range of wavelengths from X-rays to down to the GLEAM frequencies of 72-231 MHz. Change the wavelength using the slider in the top right of the screen and explore space using your mouse. The GLEAM survey can now be found on Google Play for Android phones and tablets! Click here or search for "GLEAM survey" in the Play store. For more information on Chromoscope, check out the Chromoscope blog.
If you get stuck, click "Help" in the bottom left.See the GLEAM SCOPE here

The Murchison Widefield Array (MWA) is a low frequency radio telescope located at the Murchison Radio-astronomy Observatory in Western Australia’s Mid West. The MWA observes radio waves with frequencies between 70 and 320 MHz and was the first of the three Square Kilometre Array (SKA) precursors to be completed.

A consortium of 13 partner institutions from four countries (Australia, USA, India and New Zealand) has financed the development, construction, commissioning and operations of the facility. Since commencing operations in mid 2013 the consortium has grown to include new partners from Canada and Japan.

Key science for the MWA ranges from the search for redshifted HI signals from the Epoch of Reionisation to wide-field searches for transient and variable objects (including pulsars and Fast Radio Bursts), wide-field Galactic and extra-galactic surveys, and solar and heliospheric science.

The Square Kilometre Array (SKA) project is an international effort to build the world’s largest radio telescope, led by SKA Organisation based at the Jodrell Bank Observatory near Manchester, England. Co-located primarily in South Africa and Western Australia, the SKA will be a collection of hundreds of thousands of radio antennas with a combined collecting area equivalent to approximately one million square metres, or one square kilometre. The SKA will conduct transformational science to improve our understanding of the Universe and the laws of fundamental physics, monitoring the sky in unprecedented detail and mapping it hundreds of times faster than any current facility.


‘GaLactic and Extragalactic All-sky Murchison Widefi eld Array (GLEAM) survey I: A low-frequency extragalactic catalogue’, published in the Monthly Notices of the Royal Astronomical Society on October 27th, 2016. Click here for the research paper
on October 27, 2016