For wild chimpanzees, social status is more than just a matter of pride. High-ranking chimpanzees of both sexes usually have better access to food and mates, boosting chances of survival for themselves and their offspring.  A new study of social rank in wild chimps shows striking differences between the sexes.

But male and female chimpanzees achieve social status in dramatically different ways, says a new study by primatologists at Duke University. While males actively challenge their superiors to win higher rank, females accept their position in the social pecking order, waiting until more senior group members die before moving up the ladder.

A low-ranking young female chimpanzee was wounded in a fight when she attempted to enter the female social hierarchy. 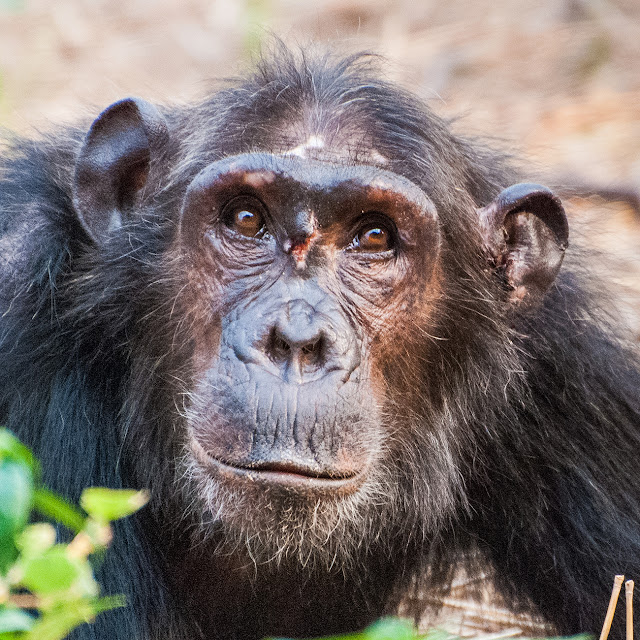 The study, which appeared online Oct. 14 in the journal Scientific Reports, provides the first detailed look at how social status among wild chimpanzees changes throughout their lifetimes.

"We found that, after entering the adult hierarchy, there was a complete absence of successful challenges for rank increases among females," said Steffen Foerster, senior research scientist at Duke University and lead author on the study. "It's like a formal queue."

Unlike the more gregarious males, female chimpanzees tend to be loners, spending much time by themselves or with their own children. One-on-one encounters between females are generally rare, giving researchers few opportunities to observe signs that would clue them in to each chimpanzee's relative rank.

"For a long time we've been aware that there really are differences in rank between females, but being able to quantify that has been hard because they really don't interact very often," said Duke evolutionary anthropology professor Anne Pusey, who is a senior author on the paper.

To explore how female chimpanzees maneuver up and down the social ladder, Foerster, Pusey and their colleagues plumbed more than 40 years of daily records documenting the behaviors of 100 or so wild chimpanzees residing in Gombe National Park in Tanzania, where Pusey first began working alongside Jane Goodall in 1970.

Chimpanzees signal dominance and submission to each other through acts of aggression, such as chases and attacks, and through making a sound called a "pant-grunt," which is a clear sign of subordination to a superior. The team used a new rating system to document these interactions, allowing them to determine the rank orders of male and female chimpanzees and watch how they shifted over time.

Their results showed that, unlike males, whose rank usually peaks when they reach their prime in their early 20s before declining again, female rank gradually increases as they age, and their rank order remains stable throughout their lifetimes. In addition, though males almost always start their adulthoods at the bottom of the pecking order, the female starting rank varies with each individual.

"That seems to be a crucial moment for them, because after they enter the hierarchy at about 12 years of age, they can't really change anything about their position unless something happens at the top and individuals die," Foerster said.

The team is still investigating how these initial rankings are established, but preliminary evidence indicates that females with mothers in the group seem to have an edge.

Despite the benefits of social status on their reproductive success -- higher-ranking females appear to have access to better food and higher infant survival than their low-ranking counterparts -- the tendency of female chimpanzees to "wait their turn" rather than fighting for rank reveals the competing priorities males and females face when ensuring the success of their offspring.

"If a male has a high rank even for a short time but manages to fertilize a lot of females, he achieves high reproductive success," Pusey said. "Whereas a female is only able to raise one offspring at a time, so her reproductive success depends largely on how long she lives."

Compared to males, female chimpanzees "likely have to consider a long-term strategy," Foerster said. "It is potentially dangerous to challenge each other -- you may get injured, your offspring may be killed if you have a little baby. Finding that females actually do not fight for rank tells us how costly these challenges must be for them."

For female chimpanzees, good things come to those who wait.