Do You Have a Saggy Brain?

New research from Newcastle University, UK, in collaboration with the Federal University of Rio de Janeiro, investigated the way the human brain folds and how this ‘cortical folding’ changes with age. Losing the youthful firmness and elasticity in our skin is one of the first outward signs of ageing. Now it seems it’s not just our skin that starts to sag - but our brains too.

Linking the change in brain folding to the tension on the cerebral cortex - the outer layer of neural tissue in our brains - the team found that as we age, the tension on the cortex appears to decrease. This effect was more pronounced in individuals with Alzheimer’s disease.

Publishing their findings today in the academic journal PNAS, the team say this new research sheds light on the underlying mechanisms which affect brain folding and could be used in the future to help diagnose brain diseases.

Lead author Dr Yujiang Wang (pictured) of Newcastle University, explains: “One of the key features of a mammalian brain is the grooves and folds all over the surface – a bit like a walnut - but until now no-one has been able to measure this folding in a consistent way. 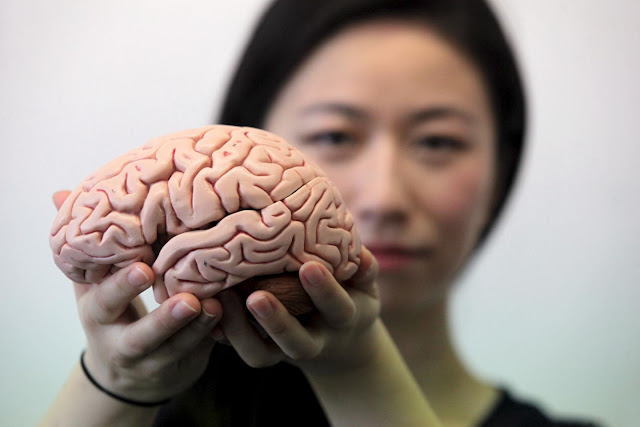 “By mapping the brain folding of over 1,000 people, we have shown that our brains fold according to a simple universal law. We also show that a parameter of the law, which is interpreted as the tension on the inside of the cortex, decreases with age.

“In Alzheimer’s disease, this effect is observed at an earlier age and is more pronounced. The next step will be to see if there is a way to use the changes in folding as an early indicator of disease.”

Common in all mammals

The expansion of the cerebral cortex is the most obvious feature of mammalian brain evolution and is generally accompanied by increasing degrees of folding of the cortical surface.

In the average adult brain, for example, if the cortex of one side – or hemisphere – was unfolded and flattened out it would have a surface area of about 100,000 mm2, roughly one and a half times the size of a piece of A4 paper.

Previous research has shown that folding of the cortex across mammalian species follows a universal law – that is, regardless of size and shape, they all fold in the same way.

However, until now there has been no systematic study demonstrating that the same law holds within a species.

“Our study has shown that we can use this same law to study changes in the human brain,” explains Dr Wang, based in Newcastle University’s world-leading School of Computing Science.

“From this, we identified a parameter that decreases with age, which we interpret as changing the tension on the cortical surface. It would be similar to the skin. As we age, the tension drops and the skin starts to slacken.

“It has long been known that the size and thickness of the cortex changes with age but the existence of a general law for folding shows us how to combine these quantities into a single measure of folding that can then be compared between genders, age groups and disease states.”

“This indicates that for the first time, we have a consistent way of quantifying cortical folding in humans,” says Dr Wang.

Throughout the lifespan of healthy individuals, cortical folding changes in the same way in both men and women but in those with Alzheimer’s disease the change in the brain folding was significantly different.

She adds: “More work is needed in this area but it does suggest that the effect Alzheimer’s disease has on the folding of the brain is akin to premature ageing of the cortex.”