The number of discovered near-Earth asteroids (NEAs) now tops 15,000, with an average of 30 new discoveries added each week. This milestone marks a 50 percent increase in the number of known NEAs since 2013, when discoveries reached 10,000 in August of that year.

Surveys funded by NASA's Near Earth Object (NEO) Observations Program (NEOs include both asteroids and comets) account for more than 95 percent of discoveries so far.

The 15,000th near-Earth asteroid is designated 2016 TB57. It was discovered on Oct. 13 by observers at the Mount Lemmon Survey, an element of the NASA-funded Catalina Sky Survey in Tucson, Arizona. 2016 TB57 is a rather small asteroid -- about 50 to 115 feet (16 to 36 meters) in size -- that will come closest to Earth on Oct. 31 at just beyond five times the distance of the moon. It will safely pass Earth.

The 15,000th near-Earth asteroid discovered is designated 2016 TB57. It was discovered on Oct. 13, 2016, by observers at the Mount Lemmon Survey, an element of the NASA-funded Catalina Sky Survey in Tucson, Arizona. 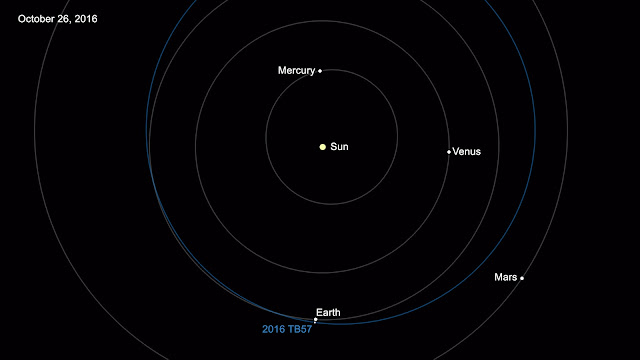 "The rising rate of discovery is due to dedicated NEO surveys and upgraded telescopes coming online in recent years," said NASA's NEO Observations Program Manager Kelly Fast. "But while we're making great progress, we still have a long way to go." It is estimated by astronomers that only about 27 percent of the NEAs that are 460 feet (140 meters) and larger have been found to date. Congress directed NASA to find over 90 percent of objects this size and larger by the end of 2020.

The following chart shows the cumulative number of known Near-Earth Asteroids (NEAs) versus time. Totals are shown for NEAs of all sizes, those NEAs larger than ~140m in size, and those larger than ~1km in size. 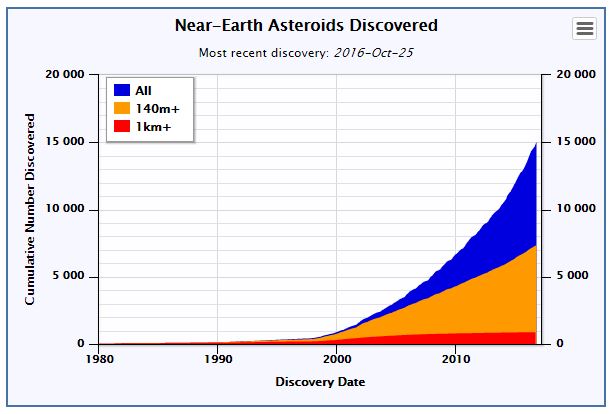 Asteroid 2013 MZ5,the 10,000th NEO, as seen by the University of Hawaii's PanSTARR-1 telescope. In this animated gif, the asteroid moves relative to a fixed background of stars. Asteroid 2013 MZ5 is in the right of the first image, towards the top, moving diagonally left/down.

A recent upgrade to one of the Catalina Sky Survey's telescopes resulted in a tripling of its average monthly NEO discovery rate. When the Pan-STARRS system increased the observing time it devoted to NEO searching to 90 percent, it increased its rate of discovery by a factor of three. Pan-STARRS also will add a second telescope to the hunt this fall. As more capable telescopes are deployed, the overall NEO survey effort will be able to find more objects as small as and smaller than 140 meters (460 feet).

The NEO Observations Program is a primary element of NASA's Planetary Defense Coordination Office, which is responsible for finding, tracking and characterizing potentially hazardous NEOs, issuing warnings about possible impacts, and coordinating U.S. government planning for response to an actual impact threat.

The chart shows the totals for NEAs of all sizes, 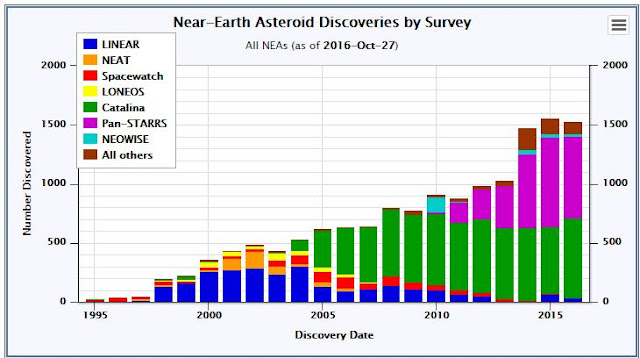 "While no known NEO currently poses a risk of impact with Earth over the next 100 years," says NASA Planetary Defense Officer Lindley Johnson, "we've found mostly the larger asteroids, and we have a lot more of the smaller but still potentially hazardous ones to find."