When the Rosetta spacecraft successfully touched down on comet 67P/Churyumov-Gerasimenko on September 30, 2016, the news was shared globally via Twitter in dozens of languages. Citizens the world over were engaged by the astronomical achievement, and now the European Space Agency and NASA are eager to learn as much as possible about the critically important celestial body of ice.

Using statistical analysis and scientific computing, astronomers at Western University have charted a path that most likely pinpoints the very origins of comet 67P/Churyumov-Gerasimenko, which is vital information in discovering what kind of material it is made from and just how long it has been present in our solar system.

“These results come from computations of the comet’s orbit from the present to the past, which is computationally difficult due to the chaosity of the orbit caused by close encounters with Jupiter,” says Galiazzo. “Thus the details are obscure but we can establish a dynamical pathway from its current orbit back to the Kuiper belt.”

Galiazzo and Wiegert think that 67P/Churyumov-Gerasimenko is relatively new to the inner parts of our solar system, having only arrived about 10,000 years ago. Prior to this time, the comet would have been inactive in frozen storage far from the Sun.


Orbit of comet 67P/Churyumov-Gerasimenko in the distant past. 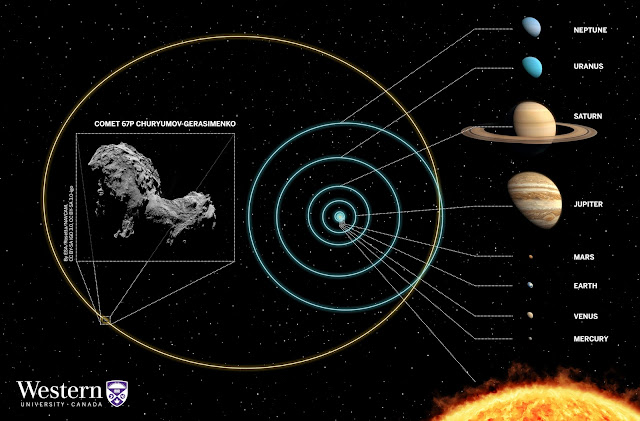 Previous studies show that similar comets — known as Jupiter Family comets — historically stay in the inner parts of our solar system for 12,000 years, therefore recognizing comet 67P/Churyumov-Gerasimenko as a member of the Jupiter Family makes sense.

The majority of the Jupiter Family comets are thought to come from the Kuiper belt — a ring-shaped accumulation of comets, asteroids and other space bodies in the solar system beyond the known planets — and Galiazzo and Wiegert believe, based on initial analysis of their investigation, that this is the case for 67P/Churyumov-Gerasimenko, as well.

Their analysis shows that, in transit, the comet likely spent millions of years in the scattering disk, a distant portion of the Kuiper belt, at about twice the distance of Neptune — our solar system’s most distant planet. This distant origin for 67P/Churyumov-Gerasimenko implies it would be made from primordial material, meaning minerals that existed in their current form since before Earth was formed.