The asteroid Juno’s orbit lies in the space between Mars and Jupiter. It has a diameter of 240 km, making it giant for an asteroid. ALMA (Atacama Large Millimeter/submillimeter Array) observed Juno for 4 hours, taking a total of 10 photos. At this time, the distance between Juno and the Earth was approximately 300 million km, so the 0.04 arcsecond resolution achieved by ALMA corresponds to 60 km on Juno’s surface. Juno is known to rotate with a period of 7.2 hours and these 10 observational images clearly show changes in the appearance with time as the oddly shaped asteroid rotates.

Animation of the asteroid Juno as imaged by ALMA. Images were taken when Juno was approximately 295 million kilometers from Earth.


A New View of Juno’s Surface

From the results of ALMA’s high angular resolution observations, we can see that Juno’s surface is not uniform. The heat capacity of the surface varies from place to place. This means it’s possible that the characteristics of the fine particles (regolith) on Juno’s surface are not homogenous.

ALMA observed Juno for four hours on 19 October 2014 when the asteroid was approximately 300 million kilometers from Earth. The complete ALMA observation, which includes 10 separate images, documents about 60 percent of one rotation of the asteroid.

Series of images of the asteroid Juno taken with ALMA. 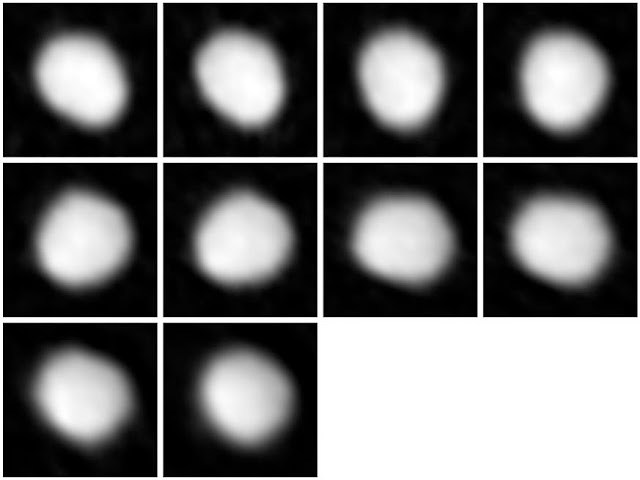 
"In contrast to optical telescopes, which capture the reflected light from the Sun, the new ALMA images show the actual millimeter-wavelength light emitted by the asteroid," said Todd Hunter, an astronomer with the National Radio Astronomy Observatory (NRAO). "By using ALMA to image the thermal glow from asteroids like Juno and other bodies in our solar system, astronomers will be able to study their shape, composition, and surface properties."

For this observation, ALMA achieved a resolution of 40 milliarcseconds, meaning that each "pixel" in the images is about 60 kilometers across, covering approximately one-fourth of the surface of Juno. This resolution is a vast improvement over earlier observations made at similar wavelengths and is enough to clearly resolve the shape of the asteroid and potentially tease out prominent surface features.

"This new observation clearly demonstrates that ALMA will be a very powerful tool for studying asteroids," said NRAO astronomer Arielle Moullet. "At its highest resolution, ALMA is powerful enough to resolve the surface of many asteroids." Earlier models of Juno developed by studying its reflected light indicate that it has an oblong, or potato-like, shape with possibly minor indentations on its surface. The ALMA images seem to support this model.