Your Brain on Sentences: What Does the Meaning of a Word Look Like?

Researchers at the University of Rochester have, for the first time, decoded and predicted the brain activity patterns of word meanings within sentences, and successfully predicted what the brain patterns would be for new sentences.

The study used functional magnetic resonance imaging (fMRI) to measure human brain activation. “Using fMRI data, we wanted to know if given a whole sentence, can we filter out what the brain’s representation of a word is—that is to say, can we break the sentence apart into its word components, then take the components and predict what they would look like in a new sentence,” said Andrew Anderson, a research fellow who led the study as a member of the lab of Rajeev Raizada, assistant professor of brain and cognitive sciences at Rochester.

“We found that we can predict brain activity patterns—not perfectly [on average 70% correct], but significantly better than chance,” said Anderson, The study is published in the journal Cerebral Cortex.

These brain maps show how accurately it was possible to predict neural activation patterns for new, previously unseen sentences, in different regions of the brain. The brighter the area, the higher the accuracy. The most accurate area, which can be seen as the bright yellow strip, is a region in the left side of the brain known as the Superior Temporal Sulcus. This region achieved statistically significant sentence predictions in 11 out of the 14 people whose brains were scanned. Although that was the most accurate region, several other regions, broadly distributed across the brain, also produced significantly accurate sentence predictions. 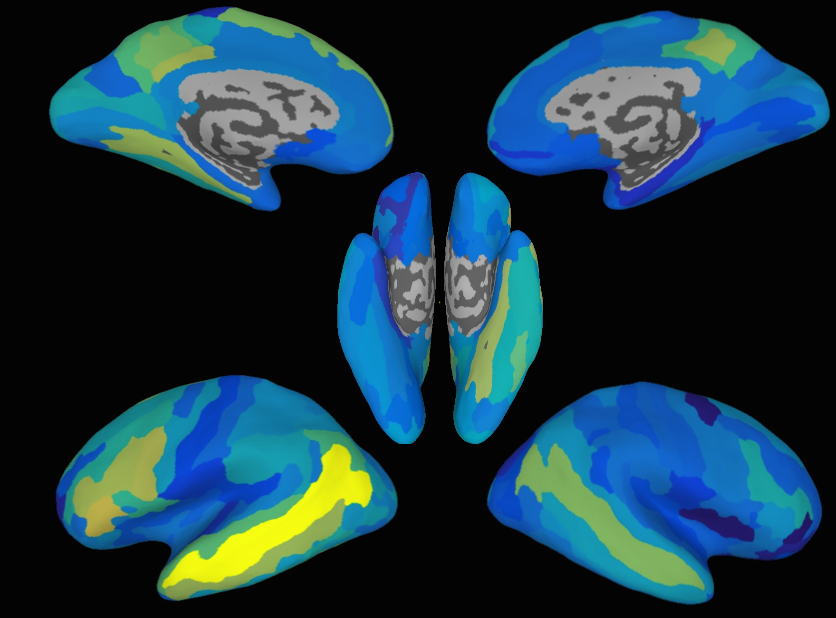 Anderson and his colleagues say the study makes key advances toward understanding how information is represented throughout the brain. “First, we introduced a method for predicting the neural patterns of words within sentences—which is a more complex problem than has been addressed by previous studies, which have almost all focused on single words,” Anderson said. “And second, we devised a novel approach to map semantic characteristics of words that we then correlated to neural activity patterns.”

Finding a word in a sentence

To predict the patterns of particular words within sentences, the researchers used a broad set of sentences, with many words shared between them. For example: “The green car crossed the bridge,” “The magazine was in the car,” and “The accident damaged the yellow car.” fMRI data was collected from 14 participants as they silently read 240 unique sentences.

Brain activation patterns for different sensory and emotional aspects of the word “play.” The numbers to the left of each brain pattern show how strongly the word is associate with each feature. For example, “play” is positively associated with “Biomotion”, because playing often involves people moving their bodies. But it is negatively associated with “Unpleasant”, because play is rarely an unpleasant activity.”

What does the meaning of a word look like?

“Coffee has a color, smell, you can drink it—coffee makes you feel good—it has sensory, emotional, and social aspects,” said senior author Raizada. “So we built upon a model created by Jeffrey Binder at the Medical College of Wisconsin, a coauthor on the paper, and surveyed people to tell us about the sensory, emotional, social and other aspects for a set of words. Together, we then took that approach in a new direction, by going beyond individual words to entire sentences.”

The new semantic model employs 65 attributes—such as “color,” “pleasant,” “loud,” and “time.” Participants in the survey rated, on a scale of 0-6, the degree to which a given root concept was associated with a particular experience. For example, “To what degree do you think of ‘coffee’ as having a characteristic or defining temperature?” In total, 242 unique words were rated with each of the 65 attributes.

“The strength of association of each word and its attributes allowed us to estimate how its meanings would be represented across the brain using fMRI,” said Raizada.

The model captures a wider breadth of experience than previous semantic models, said Anderson, “which made it easier to interpret the relationship between the predictive model and brain activity patterns.”

The team was then able to recombine activity patterns for individual words, in order to predict brain patterns for entire sentences built up out of new combinations of those words. For example, the computer model could predict the brain pattern for a sentence such as, “The family played at the beach,” even though it had never seen that specific sentence before. Instead, it had only seen other sentences containing those words in different contexts, such as “The beach was empty” and “The young girl played soccer.”

The researchers said the study opens a new set of questions toward understanding how meaning is represented in the brain. “Not now, not next year, but this kind of research may eventually help individuals who have problems with producing language, including those who suffer from traumatic brain injuries or stroke,” said Anderson.

Contacts and sources:
Monique Patenaude
University of Rochester
on August 31, 2016

Email ThisBlogThis!Share to TwitterShare to FacebookShare to Pinterest
Labels: Healh