Watching Thoughts — And Addiction — Form in The Brain in Real Time

More than a hundred years ago, Ivan Pavlov conducted what would become one of the most famous and influential psychology studies — he conditioned dogs to salivate at the ringing of a bell. Now, scientists are able to see in real time what happens in the brains of live animals during this classic experiment with a new technique. Ultimately, the approach could lead to a greater understanding of how we learn, and develop and break addictions.

The study presented is part of the event: “Kavli symposium on chemical neurotransmission: What are we thinking?” It includes a line-up of global research and thought leaders at the multi-disciplinary interfaces of the Brain Research through Advancing Innovative Neurotechnologies (BRAIN) Initiative with a focus on chemists’ contributions. The effort was launched in 2013 by the Obama Administration to enable researchers to study how brain cells interact to form circuits.

“We developed cell-based detectors called CNiFERs that can be implanted in a mouse brain and sense the release of specific neurotransmitters in real time,” says Paul A. Slesinger, Ph.D., who used this tool to revisit Pavlov’s experiment. Neurotransmitters are the chemicals that transmit messages from one neuron to another. 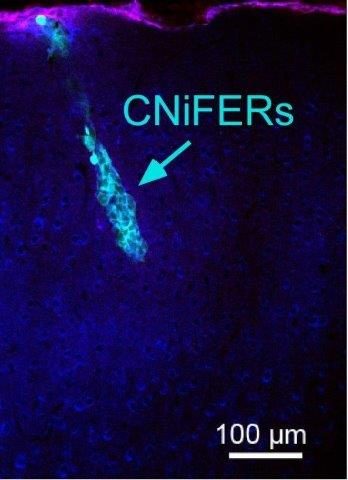 CNiFERs stands for “cell-based neurotransmitter fluorescent engineered reporters.” These detectors emit light that is readable with a two-photon microscope and are the first optical biosensors to distinguish between the nearly identical neurotransmitters dopamine and norepinephrine. These signaling molecules are associated respectively with pleasure and alertness.

Slesinger, of the Icahn School of Medicine at Mount Sinai in New York, collaborated on the project with David Kleinfeld, Ph.D., at the University of California at San Diego. Their team conditioned mice by playing a tone and then, after a short delay, rewarding them with sugar. After several days, the researchers could play the tone, and the mice would start licking in anticipation of the sugar.

“We were able to measure the timing of dopamine surges during the learning process,” Slesinger says. “That’s when we could see the dopamine signal was measured initially right after the reward. Then after days of training, we started to detect dopamine after the tone but before the reward was presented.”

Slesinger and colleagues will also share new results on the first biosensors that can detect a subset of neurotransmitters called neuropeptides. Ultimately, Slesinger says they’d like to use this sensing technique to directly measure these neuromodulators, which affect the rate of neuron firing, in real time.

Scientists will be presented their work on August 22 at the 252nd National Meeting & Exposition of the American Chemical Society (ACS). ACS, the world’s largest scientific society, is holding the meeting here through August 25. It features more than 9,000 presentations on a wide range of science topics.