Scrap tires have been on environmentalists’ blacklist for decades. They pile up in landfills, have fed enormous toxic fires, harbor pests and get burned for fuel. Scientists trying to rid us of this scourge have developed a new way to make synthetic rubber. And once this material is discarded, it can be easily degraded back to its chemical building blocks and reused in new tires and other products.

“The basic idea behind this project was to take a byproduct of the petrochemical industry and turn some of it into recyclable value-added chemicals for use in tires and other applications,” says Robert Tuba, Ph.D., one of the lead researchers on the project. “We want to make something that is good for the community and the environment.” 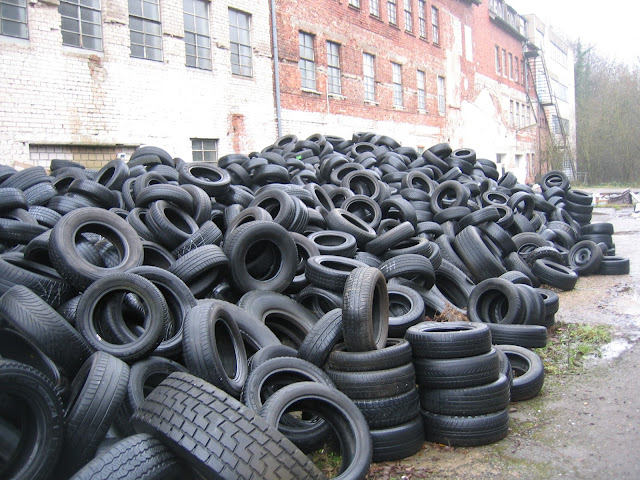 According to the Rubber Manufacturers Association, nearly 270 million tires were discarded in the U.S. in 2013 — more than one tire per adult living in the country. Thousands get stockpiled in landfills. And because tires are non-degradable, they could potentially stick around indefinitely. More than half go on to become tire-derived fuel — shredded scrap tires that get mixed with coal and other materials to help power cement kilns, pulp and paper mills and other plants. But environmentalists are concerned that the emissions from this practice could be adding harmful pollutants to the air.

One possible solution to the nation’s scrap-tire glut would be to make new tires with degradable materials. Since 2012, the research team led by Hassan S. Bazzi, Ph.D., at the Texas A&M University campus in Qatar (TAMU-Qatar) has been working on this option. They started with a basic molecule called cyclopentene. Cyclopentene and its precursor cyclopentadiene are low-value major components of the abundant waste from petrochemical refining, in particular its steam-cracking operation C5 fraction, which contains hydrocarbons with five carbon atoms. With colleagues at the California Institute of Technology, they have been experimenting with catalysts to string cyclopentene molecules together to make polypentenamers, which are similar to natural rubber.

Currently, synthetic-rubber makers use butadiene as their base material, but its cost has recently gone up, opening the door to competition. So Tuba turned to cyclopentene as a potential alternative. Calculations showed that polymerizing cyclopentene and degrading it under relatively mild reaction conditions — and thus requiring minimal energy and expense — should be possible.

“We did theoretical studies to predict the feasibility of the synthesis and recyclability of polypentenamer-based tire additives using equilibrium ring opening metathesis polymerization,” explains Antisar Hlil, also at TAMU-Qatar. “Then we did experimental studies and found that the concept works very well.”

Using ruthenium, a transition-metal catalyst, the researchers polymerized cyclopentene at 0 degrees Celsius and decomposed the resulting material at 40 to 50 degrees. For industry, these are low temperatures that do not require a lot of energy. Additionally, in the lab, they could recover 100 percent of their starting material from several polypentenamer-based tire additives they developed.

In progress are new studies that mix the synthetic rubber with other tire materials, which include metals and fillers. The researchers are also scaling up their lab experiments to see whether the tire industry could realistically use their processes.

“If the fundamental studies are very promising — which at this point, we believe they are — then our industry partner will come in to continue this project and bring the material to market,” Tuba says.

The researchers acknowledge funding from the Qatar Foundation and the Qatar National Research Fund.