New research from the University of British Columbia suggests there may be some truth to the belief that marijuana use causes laziness— at least in rats. 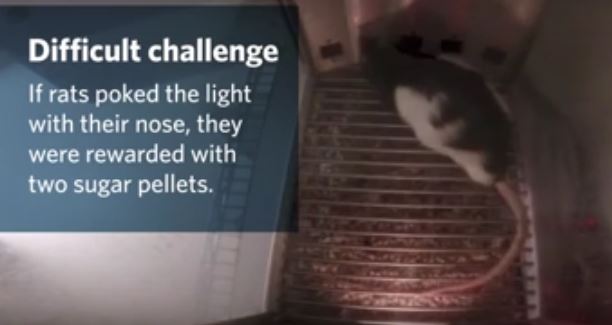 The study, published August 23rd in the Journal of Psychiatry and Neuroscience, found that tetrahydrocannabinol (THC), the main psychoactive ingredient in marijuana, makes rats less willing to try a cognitively demanding task.

“Perhaps unsurprisingly, we found that when we gave THC to these rats, they basically became cognitively lazy,” said Mason Silveira, the study’s lead author and a PhD candidate in UBC’s department of psychology. “What’s interesting, however, is that their ability to do the difficult challenge was unaffected by THC. The rats could still do the task— they just didn’t want to.”

For the study, researchers looked at the effects of both THC and cannabidiol (CBD) on rats’ willingness to exert cognitive effort.

They trained 29 rats to perform a behavioural experiment in which the animals had to choose whether they wanted an easy or difficult challenge to earn sugary treats.

Under normal circumstances, most rats preferred the harder challenge to earn a bigger reward. But when the rats were given THC, the animals switched to the easier option, despite earning a smaller reward.

When they looked at the effect of CBD, an ingredient in marijuana that does not result in a high, researchers found the chemical did not have any effect on rats’ decision-making or attention. CBD, which is believed to be beneficial in treating pain, epilepsy and even cancer, also didn’t block the negative effects of THC.

“This was surprising, as it had been suggested that high concentrations of CBD could modulate or reduce the negative effects of THC,” said Catharine Winstanley, senior author of the study and an associate professor in UBC’s department of psychology. “Unfortunately, that did not appear to be the case.”

Given how essential willingness to exert cognitive effort is for people to achieve success, Winstanley said the findings underscore the importance of realizing the possible effect of cannabis use on impairing willingness to engage in harder tasks.

While some people view marijuana as a panacea that can cure all ailments, the findings also highlight a need for more research to determine what THC does to the human brain to alter decision-making. That could eventually allow scientists to block these effects of THC, allowing those who use medical marijuana to enjoy the possible benefits of cannabis without the less desirable cognitive effects.
Method

At the beginning of each behavioural experiment, rats chose between two levers to signal whether they wanted an easy or hard challenge.

Choosing the easy challenge resulted in a light turning on for one second, which the rats could easily detect and respond to by poking it with their nose, receiving one sugar pellet as a reward. In the more difficult challenge, the light turned on for only 0.2 seconds, rewarding the rat with two sugar pellets if they responded with a nose poke.