Synthetic Life Does Math in a Test Tube, Are DNA Computers Next?

Often described as the blueprint of life, DNA contains the instructions for making every living thing from a human to a house fly.

But in recent decades, some researchers have been putting the letters of the genetic code to a different use: making tiny nanoscale computers.

In a new study, a Duke University team led by professor John Reif created strands of synthetic DNA that, when mixed together in a test tube in the right concentrations, form an analog circuit that can add, subtract and multiply as they form and break bonds.

Duke graduate student Tianqi Song and computer science professor John Reif have created an analog DNA circuit that can add, subtract and multiply as the molecules form and break bonds. 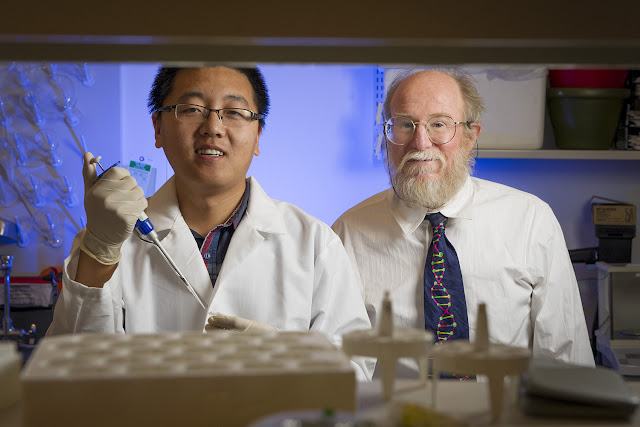 Rather than voltage, DNA circuits use the concentrations of specific DNA strands as signals.

Other teams have designed DNA-based circuits that can solve problems ranging from calculating square roots to playing tic-tac-toe. But most DNA circuits are digital, where information is encoded as a sequence of zeroes and ones.

Instead, the new Duke device performs calculations in an analog fashion by measuring the varying concentrations of specific DNA molecules directly, without requiring special circuitry to convert them to zeroes and ones first.

The researchers describe their approach in the August issue of the journal ACS Synthetic Biology.

Unlike the silicon-based circuits used in most modern day electronics, commercial applications of DNA circuits are still a long way off, Reif said.

For one, the test tube calculations are slow. It can take hours to get an answer.

“We can do some limited computing, but we can’t even begin to think of competing with modern-day PCs or other conventional computing devices,” Reif said.

But DNA circuits can be far tinier than those made of silicon. And unlike electronic circuits, DNA circuits work in wet environments, which might make them useful for computing inside the bloodstream or the soupy, cramped quarters of the cell.

The technology takes advantage of DNA’s natural ability to zip and unzip to perform computations. Just like Velcro and magnets have complementary hooks or poles, the nucleotide bases of DNA pair up and bind in a predictable way.

When a single strand encounters a perfect match at the end of one of the partially double-stranded ones, it latches on and binds, displacing the previously bound strand and causing it to detach, like someone cutting in on a dancing couple.

The newly released strand can in turn pair up with other complementary DNA molecules downstream in the circuit, creating a domino effect.

The researchers solve math problems by measuring the concentrations of specific outgoing strands as the reaction reaches equilibrium.

To see how their circuit would perform over time as the reactions proceeded, Reif and Duke graduate student Tianqi Song used computer software to simulate the reactions over a range of input concentrations. They have also been testing the circuit experimentally in the lab.

Besides addition, subtraction and multiplication, the researchers are also designing more sophisticated analog DNA circuits that can do a wider range of calculations, such as logarithms and exponentials.

Conventional computers went digital decades ago. But for DNA computing, the analog approach has its advantages, the researchers say. For one, analog DNA circuits require fewer strands of DNA than digital ones, Song said.

Analog circuits are also better suited for sensing signals that don’t lend themselves to simple on-off, all-or-none values, such as vital signs and other physiological measurements involved in diagnosing and treating disease.

The hope is that, in the distant future, such devices could be programmed to sense whether particular blood chemicals lie inside or outside the range of values considered normal, and release a specific DNA or RNA -- DNA’s chemical cousin -- that has a drug-like effect.

Reif’s lab is also beginning to work on DNA-based devices that could detect molecular signatures of particular types of cancer cells, and release substances that spur the immune system to fight back.

Even very simple DNA computing could still have huge impacts in medicine or science,” Reif said.