Among the top puzzles in the development of fusion energy is the best shape for the magnetic facility — or “bottle” — that will provide the next steps in the development of fusion reactors. Leading candidates include spherical tokamaks, compact machines that are shaped like cored apples, compared with the doughnut-like shape of conventional tokamaks. The spherical design produces high-pressure plasmas — essential ingredients for fusion reactions — with relatively low and cost-effective magnetic fields.

Creating "a star in a jar" - replicating on Earth the way the sun and stars create energy through fusion - requires a "jar" that can contain superhot plasma and is low-cost enough to be built around the world. Such a device would provide humankind with near limitless energy, ending dependence on fossil fuels for generating electricity.

This image shows a test cell for National Spherical Torus Experiment-Upgrade with tokamak in the center. 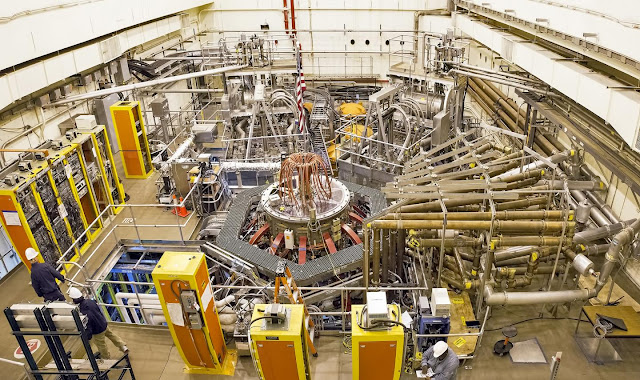 Physicists at the U.S. Department of Energy's Princeton Plasma Physics Laboratory (PPPL) say that a model for such a "jar," or fusion device, already exists in experimental form - the compact spherical tokamaks at PPPL and Culham, England. These tokamaks, or fusion reactors, could provide the design for possible next steps in fusion energy - a Fusion Nuclear Science Facility (FNSF) that would develop reactor components and also produce electricity as a pilot plant for a commercial fusion power station.

The detailed proposal for such a "jar" is described in a paper published in August 2016 in the journal Nuclear Fusion. "We are opening up new options for future plants," said lead author Jonathan Menard, program director for the recently completed National Spherical Torus Experiment-Upgrade (NSTX-U) at PPPL. The $94-million upgrade of the NSTX, financed by the U.S. Department of Energy's Office of Science, began operating last year.

Spherical tokamaks are compact devices that are shaped like cored apples, compared with the bulkier doughnut-like shape of conventional tokamaks. The increased power of the upgraded PPPL machine and the soon-to-be completed MAST Upgrade device moves them closer to commercial fusion plants that will create safe, clean and virtually limitless energy without contributing greenhouse gases that warm the Earth and with no long-term radioactive waste.

The NSTX-U and MAST facilities "will push the physics frontier, expand our knowledge of high temperature plasmas, and, if successful, lay the scientific foundation for fusion development paths based on more compact designs," said PPPL Director Stewart Prager.

The devices face a number of physics challenges. For example, they must control the turbulence that arises when superhot plasma particles are subjected to powerful electromagnetic fields. They must also carefully control how the plasma particles interact with the surrounding walls to avoid possible disruptions that can halt fusion reactions if the plasma becomes too dense or impure. Researchers at PPPL, Culham, and elsewhere are looking at ways of solving these challenges for the next generation of fusion devices.

The fourth state of matter

The spherical design produces high-pressure plasmas - the superhot charged gas also known as the fourth state of matter that fuels fusion reactions - with relatively low and inexpensive magnetic fields. This unique capability points the way to a possible next generation of fusion experiments to complement ITER, the international tokamak that 35 nations including the United States are building in France to demonstrate the feasibility of fusion power. ITER is a doughnut-shaped tokamak that will be largest in the world when completed within the next decade.

"The main reason we research spherical tokamaks is to find a way to produce fusion at much less cost than conventional tokamaks require," said Ian Chapman, the newly appointed chief executive of the United Kingdom Atomic Energy Authority and leader of the UK's magnetic confinement fusion research programme at the Culham Science Centre.

Center stack of the NSTX-U. 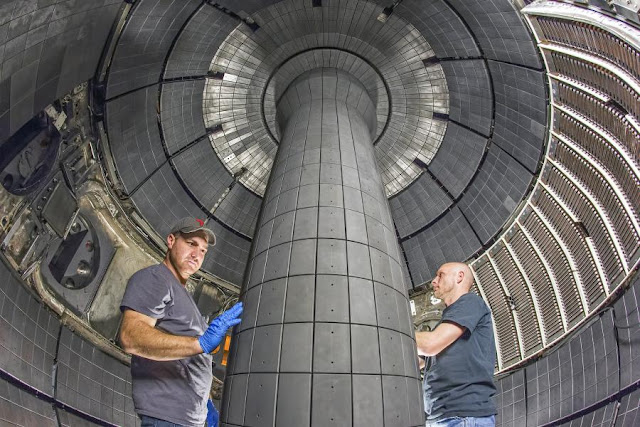 The 43-page Nuclear Fusion paper describes how the spherical design can provide the next steps in fusion energy. A key issue is the size of the hole in the center of the tokamak that holds and shapes the plasma. In spherical tokamaks, this hole can be half the size of the hole in conventional tokamaks, enabling control of the plasma with relatively low magnetic fields.

The smaller hole could be compatible with a blanket system for the FNSF that would breed tritium, a rare isotope - or form - of hydrogen. Tritium will fuse with deuterium, another isotope of hydrogen, to produce fusion reactions in next-step tokamaks. 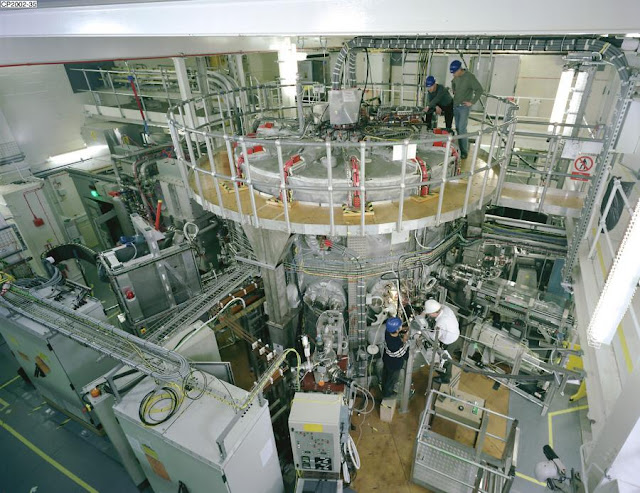 Included in the paper is a description of a device called a "neutral beam injector" that will start and sustain plasma current without relying on a heating coil in the center of the tokamak. Such a coil is not suitable for continuous long-term operation. The neutral beam injector will pump fast-moving neutral atoms into the plasma and will help optimize the magnetic field that confines and controls the superhot gas.

Taken together, the paper describes concepts that strongly support a spherical facility to develop fusion components and create on Earth "a star in a jar"; the upgraded NSTX and MAST facilities will provide crucial data for determining the best path for ultimately generating electricity from fusion.