A University of Adelaide-led project has overturned the theory that the evolution of human intelligence was simply related to the size of the brain -- but rather linked more closely to the supply of blood to the brain.

The international collaboration between Australia and South Africa showed that the human brain evolved to become not only larger, but more energetically costly and blood thirsty than previously believed.

The research team calculated how blood flowing to the brain of human ancestors changed over time, using the size of two holes at the base of the skull that allow arteries to pass to the brain. The findings, published in the Royal Society journal Open Science, allowed the researchers to track the increase in human intelligence across evolutionary time. 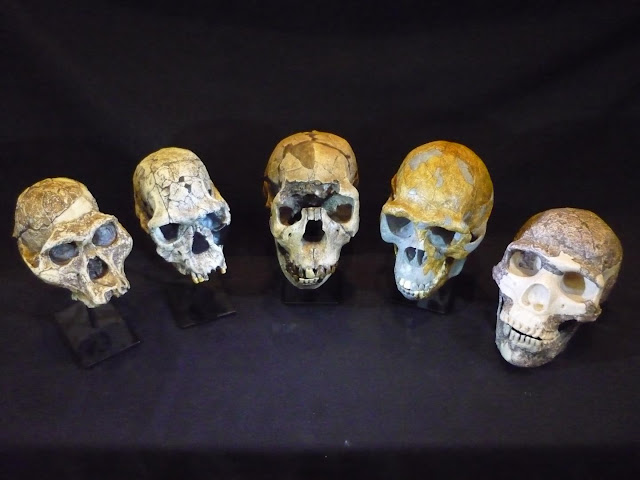 "Brain size has increased about 350% over human evolution, but we found that blood flow to the brain increased an amazing 600%," says project leader Professor Emeritus Roger Seymour, from the University of Adelaide. "We believe this is possibly related to the brain's need to satisfy increasingly energetic connections between nerve cells that allowed the evolution of complex thinking and learning.

"To allow our brain to be so intelligent, it must be constantly fed oxygen and nutrients from the blood.

"The more metabolically active the brain is, the more blood it requires, so the supply arteries are larger. The holes in fossil skulls are accurate gauges of arterial size."

These are human skulls, showing the location of two openings for the internal carotid arteries that supply the cerebrum of the brain almost entirely. The sizes of these openings reveal the rate of blood flow, which is related to brain metabolic rate and cognitive ability. 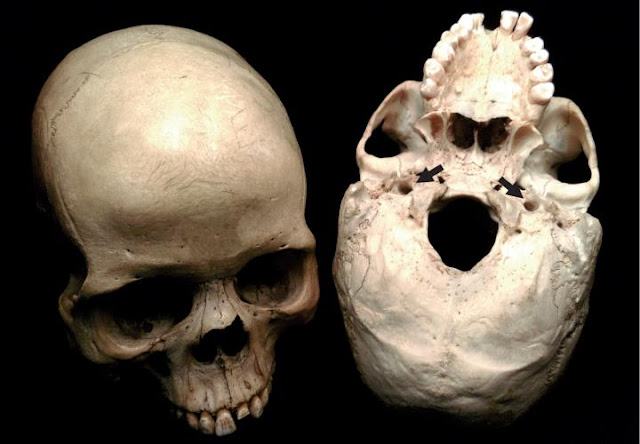 Co-author Dr Edward Snelling, University of the Witwatersrand, says: "Ancient fossil skulls from Africa reveal holes where the arteries supplying the brain passed through. The size of these holes show how blood flow increased from three million-year-old Australopithecus to modern humans. The intensity of brain activity was, before now, believed to have been taken to the grave with our ancestors."

Honours student and co-author Vanya Bosiocic had the opportunity to travel to South Africa and work with world renowned anthropologists on the oldest hominin skull collection, including the newly-discovered Homo naledi.

"Throughout evolution, the advance in our brain function appears to be related to the longer time it takes for us to grow out of childhood. It is also connected to family cooperation in hunting, defending territory and looking after our young," Ms Bosiocic says.

"The emergence of these traits seems to nicely follow the increase in the brain's need for blood and energy."