By fine-tuning the chemical composition of nanoparticles, researchers at Agency for Science, Technology and Research (A*STAR) have developed a coating that is promising for fabricating smart windows suitable for tropical countries. Such windows block almost all the infrared heat from sun rays, while admitting most of the visible light.

The transparency of glass to visible light makes it the most common way to let light into a building. But because glass is also transparent to near-infrared radiation — windows also let in heat, giving rise to the well-known greenhouse effect. While this heating is welcomed in colder climates, it means that air conditioning has to work harder to maintain a comfortable temperature in in tropical climes.

A*STAR researchers have developed a window coating that lets visible light through while blocking near-infrared radiation. 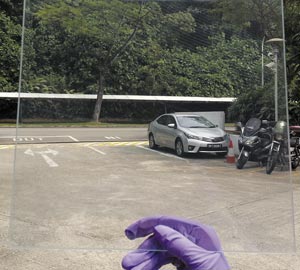 Developing smart windows that allow most of the sun’s light in, while blocking near-infrared radiation, would cut energy costs and reduce carbon emissions.

“In tropical Singapore, where air conditioning is the largest component of a building’s energy requirements, even a small reduction in heat intake can translate into significant savings,” notes Hui Huang of the A*STAR Singapore Institute of Manufacturing and Technology.

Huang and his co-workers have developed such windows by coating glass with tin oxide nanoparticles doped with small amounts of the element antimony. By varying the nanoparticles’ antimony concentration, they could optimize their ability to absorb near-infrared radiation.

The team produced the tiny nanoparticles using a synthesis technique known as the solvothermal method, in which precursors are heated under pressure in a special vessel, called an autoclave. The solvothermal method permits synthesis at relatively low temperatures. It also enables the nanoparticle size to be tightly controlled, which is important when trying to block some wavelengths of light while allowing others to pass through.

The work has already attracted the interest of industry. “A local glass company supporting this project is interested in licensing this smart window technology with infrared shielding,” says Huang. Potentially, the coating techniques could be applied on-site to existing windows, he adds.

The A*STAR-affiliated researchers contributing to this research are from the Singapore Institute of Manufacturing and Technology. For more information on the team's research, please visit the Surface Technology Group webpage.


Contacts and sources:
The Agency for Science, Technology and Research (A*STAR)