Powerful Marsupial Lion Dispatched Its Prey in an Unusual Way

Scientists from the Universities of Bristol and Málaga have proposed that the long extinct marsupial lion hunted in a very unique way - by using its teeth to hold prey before dispatching them with its huge claws.

The marsupial lion, or Thylacoleo carnifex, was a predator in the Pleistocene era of Australia and was about the same size as a large jaguar.

It was known to have existed from around two-and-a-half-million years ago until as recently as a few tens of thousands of years ago. 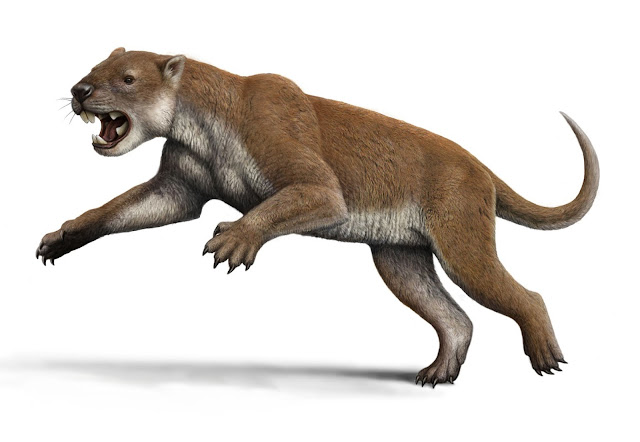 The animal is depicted on native Australian cave art and some speculate it still survives as the “Queensland Tiger”.

As its name suggests, the marsupial lion has long been presumed to be a cat-like predator, despite lacking large canine teeth – instead it had large, protruding incisors that have been suggested to be canine substitutes.

Thylacoleo was a powerful beast but, as other researchers have noted, it had limbs of different proportions to a lion, suggesting it was not a fast.

It also sported a very large claw on its hand, similar to the dew claw of cats but of a much bigger size, with a bony sheath foisted on a mobile first digit (thumb).

The new study, published in Paleobiology by Christine Janis, a Marie Curie Research Fellow at the University of Bristol (currently on a leave of absence from a professorship at Brown University, USA) with colleagues Borja Figueirido and Alberto Martín-Serra from the University of Málaga, Spain looked at the elbow joints of a large number of living mammals.

This showed a strong association between the anatomy of the humerus (upper arm bone) where it articulates with the forelimb and the locomotor behaviour of mammals.

Animals more specialized for running (like a dog) have a joint indicating movement limited for back and forwards, stabilising their bodies on the ground, while animals more specialised for climbing (like a monkey) have a joint that allows for rotation of the hand around the elbow. Modern cats, which (unlike dogs) use their forelimbs to grapple with their prey, have an elbow joint of intermediate shape.

Christine Janis said: “If Thylacoleo had hunted like a lion using its forelimbs to manipulate its prey, then its elbow joint should have been lion-like”.

“But, surprisingly, it a unique elbow-joint among living predatory mammals - one that suggested a great deal of rotational capacity of the hand, like an arboreal mammal, but also features not seen in living climbers, that would have stabilized the limb on the ground (suggesting that it was not simply a climber).”

Christine Janis and colleagues proposed that this unique elbow joint, in combination with the huge “dew claw” on a mobile thumb, would have allowed the marsupial lion to use that claw to kill its prey.

In contrast the large incisors were blunt. While Thylacoleo had massive shearing teeth in the back of its jaw, the incisors appear to have functioned better for gripping than for piercing flesh in a killing bite.

They concluded that, unlike a real lion, which holds its prey with its claws, and kills it with its teeth, the marsupial lion - unlike any living predator - used its teeth to hold its prey, while it dispatched it with its huge claws.