For years, astronomers have puzzled over a massive star lodged deep in the Milky Way that shows conflicting signs of being extremely old and extremely young.

An age-defying star designated as IRAS 19312+1950 (arrow) exhibits features characteristic of a very young star and a very old star. The object stands out as extremely bright inside a large, chemically rich cloud of material, as shown in this image from NASA’s Spitzer Space Telescope.

A NASA-led team of scientists thinks the star – which is about 10 times as massive as our sun and emits about 20,000 times as much energy – is a newly forming protostar. That was a big surprise because the region had not been known as a stellar nursery before. But the presence of a nearby interstellar bubble, which indicates the presence of a recently formed massive star, also supports this idea. 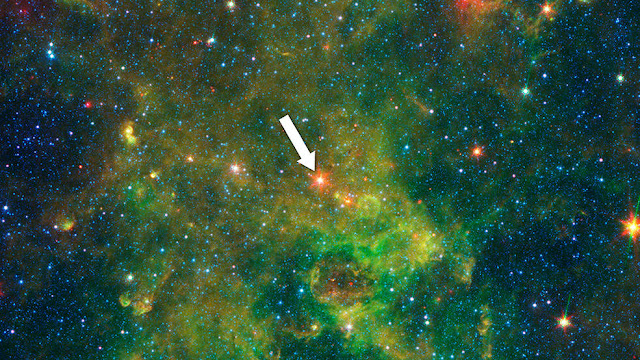 For years, astronomers have puzzled over a massive star lodged deep in the Milky Way that shows conflicting signs of being extremely old and extremely young.

Researchers initially classified the star as elderly, perhaps a red supergiant. But a new study by a NASA-led team of researchers suggests that the object, labeled IRAS 19312+1950, might be something quite different – a protostar, a star still in the making.

“Astronomers recognized this object as noteworthy around the year 2000 and have been trying ever since to decide how far along its development is,” said Martin Cordiner, an astrochemist working at NASA’s Goddard Space Flight Center in Greenbelt, Maryland. He is the lead author of a paper in the Astrophysical Journal describing the team’s findings, from observations made using NASA’s Spitzer Space Telescope and ESA’s Herschel Space Observatory.

Located more than 12,000 light-years from Earth, the object first stood out as peculiar when it was observed at particular radio frequencies. Several teams of astronomers studied it using ground-based telescopes and concluded that it is an oxygen-rich star about 10 times as massive as the sun. The question was: What kind of star?

Some researchers favor the idea that the star is evolved – past the peak of its life cycle and on the decline. For most of their lives, stars obtain their energy by fusing hydrogen in their cores, as the sun does now. But older stars have used up most of their hydrogen and must rely on heavier fuels that don't last as long, leading to rapid deterioration. 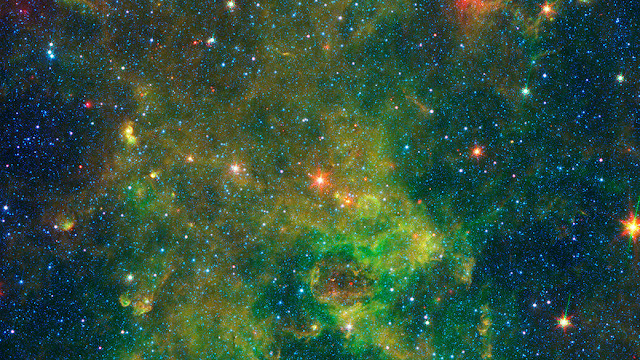 Two early clues – intense radio sources called masers – suggested the star was old. In astronomy, masers occur when the molecules in certain kinds of gases get revved up and emit a lot of radiation over a very limited range of frequencies. The result is a powerful radio beacon – the microwave equivalent of a laser.

One maser observed with IRAS 19312+1950 is almost exclusively associated with late-stage stars. This is the silicon oxide maser, produced by molecules made of one silicon atom and one oxygen atom. Researchers don’t know why this maser is nearly always restricted to elderly stars, but of thousands of known silicon oxide masers, only a few exceptions to this rule have been noted.

Also spotted with the star was a hydroxyl maser, produced by molecules comprised of one oxygen atom and one hydrogen atom. Hydroxyl masers can occur in various kinds of astronomical objects, but when one occurs with an elderly star, the radio signal has a distinctive pattern – it’s especially strong at a frequency of 1612 megahertz. That’s the pattern researchers found in this case.

Even so, the object didn’t entirely fit with evolved stars. Especially puzzling was the smorgasbord of chemicals found in the large cloud of material surrounding the star. A chemical-rich cloud like this is typical of the regions where new stars are born, but no such stellar nursery had been identified near this star.

Scientists initially proposed that the object was an old star surrounded by a surprising cloud typical of the kind that usually accompanies young stars. Another idea was that the observations might somehow be capturing two objects: a very old star and an embryonic cloud of star-making material in the same field.

Cordiner and his colleagues began to reconsider the object, conducting observations using ESA’s Herschel Space Observatory and analyzing data gathered earlier with NASA’s Spitzer Space Telescope. Both telescopes operate at infrared wavelengths, which gave the team new insight into the gases, dust and ices in the cloud surrounding the star.

The additional information leads Cordiner and colleagues to think the star is in a very early stage of formation. The object is much brighter than it first appeared, they say, emitting about 20,000 times the energy of our sun. The team found large quantities of ices made from water and carbon dioxide in the cloud around the object. These ices are located on dust grains relatively close to the star, and all this dust and ice blocks out starlight making the star seem dimmer than it really is.

In addition, the dense cloud around the object appears to be collapsing, which happens when a growing star pulls in material. In contrast, the material around an evolved star is expanding and is in the process of escaping to the interstellar medium. The entire envelope of material has an estimated mass of 500 to 700 suns, which is much more than could have been produced by an elderly or dying star.

“We think the star is probably in an embryonic stage, getting near the end of its accretion stage – the period when it pulls in new material to fuel its growth,” said Cordiner.

Also supporting the idea of a young star are the very fast wind speeds measured in two jets of gas streaming away from opposite poles of the star. Such jets of material, known as a bipolar outflow, can be seen emanating from young or old stars. However, fast, narrowly focused jets are rarely observed in evolved stars. In this case, the team measured winds at the breakneck speed of at least 200,000 miles per hour (90 kilometers per second) – a common characteristic of a protostar.

Still, the researchers acknowledge that the object is not a typical protostar. For reasons they can’t explain yet, the star has spectacular features of both a very young and a very old star.

“No matter how one looks at this object, it’s fascinating, and it has something new to tell us about the life cycles of stars,” said Steven Charnley, a Goddard astrochemist and co-author of the paper.

Herschel is an ESA space observatory with science instruments provided by European-led principal investigator consortia and with important participation from NASA.