Paleontologists with the Burke Museum of Natural History and Culture and the University of Washington have discovered a Tyrannosaurus rex, including a very complete skull. The find, which paleontologists estimate to be about 20 percent of the animal, includes vertebrae, ribs, hips and lower jaw bones.

The team, led by Burke Museum Adjunct Curator of Vertebrate Paleontology and UW biology professor Gregory P. Wilson, discovered the T. rex during an expedition to the Hell Creek Formation in northern Montana -- an area that is world-famous for its fossil dinosaur sites. Two Burke Museum paleontology volunteers, Jason Love and Luke Tufts, initially discovered pieces of fossilized bone protruding from a rocky hillside. The bones' large size and honeycomb-like structure indicated they belonged to a carnivorous dinosaur. Upon further excavation, the team discovered the T. rex skull along with ribs, vertebrae, and parts of the jaw and pelvis.

Paleontologists prepare to remove a Tyrannosaurus rex skull from a fossil dig site in northern Montana and transport it to the Burke Museum at the University of Washington. 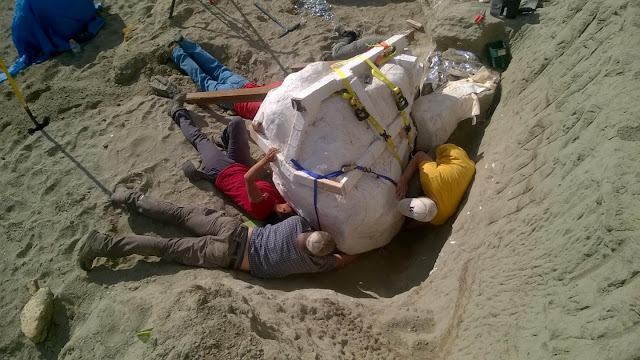 T. rex was one of the largest meat-eating dinosaurs to ever roam the Earth. Measuring an average of 40-feet long and 15 to 20-feet tall, T. rex was a fierce predator with serrated teeth and large jaws. Fossil evidence shows it ate other dinosaurs like Edmontosaurus andTriceratops, with crushed bones from the animals even showing up in the its fossilized poop.T. rex lived about 66-68 million years ago in forested river valleys in western North America during the late Cretaceous Period.


The T. rex found by the Burke/UW team is nicknamed the "Tufts-Love Rex" in honor of the two volunteers who discovered it. The skull is about 4 feet long weighs about 2,500 pounds in its protective plaster jacket. Excavation in the field revealed the right side of the skull from base to snout, including teeth. Burke paleontologists believe it is very probable the other side of the skull is present, but will need to carefully remove the rock surrounding the fossil before they can determine its completeness.

"We think the Tufts-Love Rex is going to be an iconic specimen for the Burke Museum and the state of Washington and will be a must-see for dinosaur researchers as well," said Wilson.

Based on the size of its skull, Burke paleontologists estimate this dinosaur is about 85 percent the size of the largest T. rex found to date. At the hips, the T. rex would have been nearly as tall as a city bus, and as long as a bus from tail to head. 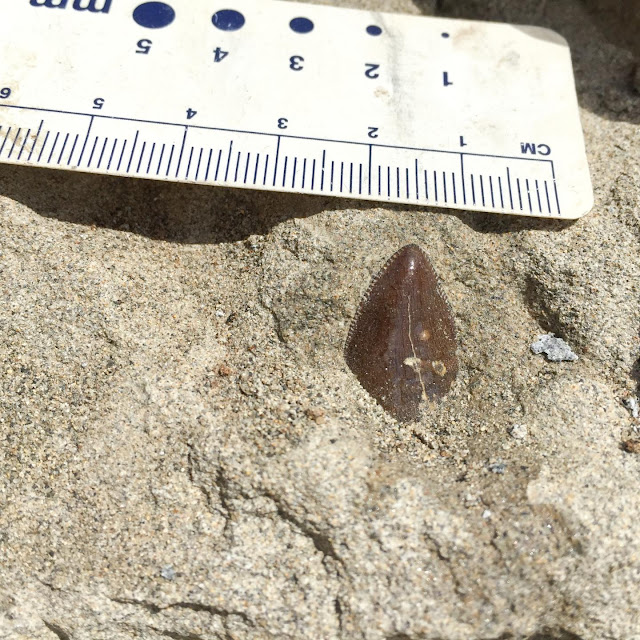 Although arguably the most iconic and well-known dinosaur, T. rex fossils are rare. This remarkable find is one of only about 25 of this level of completeness. The skull is the 15th reasonably complete T. rex skull known to exist in the world. Next summer, Burke paleontologists will search for additional parts of the dinosaur at the site.

More than 45 people helped excavate the T. rex over the course of a month this summer. The team was collecting fossils in the area for the Hell Creek Project, a multi-disciplinary project examining vertebrates, invertebrates, plants and geology of the area to learn more about the final 2 million years of the dinosaur era, the mass-extinction event that killed off the dinosaurs, and the first 1.5 million years post-extinction that gave rise to the age of mammals. The project, currently led by Wilson, was founded by Jack Horner and Nathan Myhrvold. Burke paleontologists, volunteers, undergraduate and graduate students from the UW and other universities and K-12 educators participating in the Burke's DIG Field School contribute to the project.

"This is really great news. The Hell Creek Project is responsible for finding the most T. rexspecimens in the world, with 11 to date," said Myhrvold, Intellectual Ventures CEO and Paleontologist. "The T. rex has always been my favorite dinosaur and I'm really pleased that this one is going to make its home at the Burke Museum."

"Having seen the 'Tufts-Love Rex' during its excavation I can attest to the fact that it is definitely one of the most significant specimens yet found, and because of its size, is sure to yield important information about the growth and possible eating habits of these magnificent animals," said Horner, former curator of paleontology at the Museum of the Rockies and current Burke Museum research associate.

The T. rex skull and other bones are currently covered in a plaster jacket -- similar to a cast used to cover a broken bone -- in order to protect the skull during transport. The public can see the plaster-covered T. rex skull, along with other T. rex fossils and paleontology field tools, in a lobby display at the Burke Museum from August 20 to October 2. Special T. rex-themed activities will take place over Labor Day Weekend and on Sunday, September 25.

After removing the fossil from display, the Burke's paleontology team will begin preparing the fossil by removing the rock surrounding the bone, which may take a year or more. The museum plans to display the T. rex skull in the New Burke Museum when it opens in 2019.

Contacts and sources:
Andrea Godinez
University of Washington
on August 19, 2016