In 2020, NASA plans to launch a new Mars rover that will be tasked with probing a region of the planet scientists believe could hold remnants of ancient microbial life. The rover will collect samples of rocks and soil, and store them on the Martian surface; the samples would be returned to Earth sometime in the distant future so that scientists can meticulously analyze the samples for signs of present or former extraterrestrial life.

Now, as reported in the journal Carbon, MIT scientists have developed a technique that will help the rover quickly and non-invasively identify sediments that are relatively unaltered, and that maintain much of their original composition. Such "pristine" samples give scientists the best chance for identifying signs of former life, if they exist, as opposed to rocks whose histories have been wiped clean by geological processes such as excessive heating or radiation damage.

Mars’ Valles Marineris canyon, pictured, spans as much as 600 kilometers across and delves as much as 8 kilometers deep. The image was created from over 100 images of Mars taken by Viking Orbiters in the 1970s. 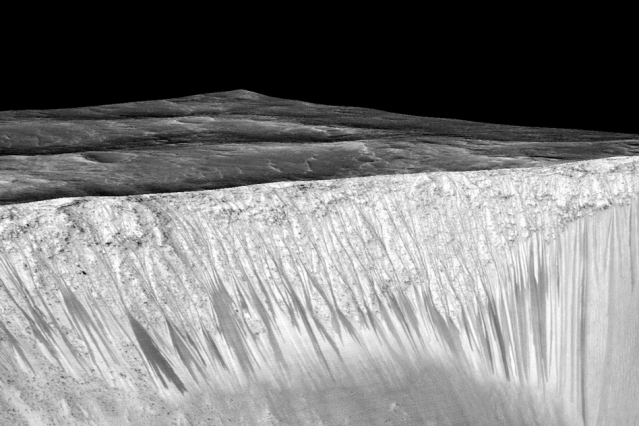 The team's technique centers on a new way to interpret the results of Raman spectroscopy, a common, non-destructive process that geologists use to identify the chemical composition of ancient rocks. Among its suite of scientific tools, the 2020 Mars rover includes SHERLOC (Scanning Habitable Environments with Raman and Luminescence for Organics and Chemicals), an instrument that will acquire Raman spectra from samples on or just below the Martian surface. SHERLOC will be pivotal in determining whether life ever existed on Mars.

Raman spectroscopy measures the minute vibrations of atoms within the molecules of a given material. For example, graphite is composed of a very orderly arrangement of carbon atoms. The bonds between these carbon atoms vibrate naturally, at a frequency that scientists can measure when they focus a laser beam on graphite's surface.

As atoms and molecules vibrate at various frequencies depending on what they are bound to, Raman spectroscopy enables scientists to identify key aspects of a sample's chemical composition. More importantly, the technique can determine whether a sample contains carbonaceous matter -- a first clue that the sample may also harbor signs of life.
But Roger Summons, professor of earth, atmospheric, and planetary sciences at MIT, says the chemical picture that scientists have so far been able to discern using Raman spectroscopy has been somewhat fuzzy. For example, a Raman spectrum acquired from a piece of coal on Earth might look very similar to that of an organic particle in a meteorite that was originally made in space.

However, Nicola Ferralis, a research scientist in MIT's Department of Materials Science and Engineering, discovered hidden features in Raman spectra that can give a more informed picture of a sample's chemical makeup. Specifically, the researchers were able to estimate the ratio of hydrogen to carbon atoms from the substructure of the peaks in Raman spectra. This is important because the more heating any rock has experienced, the more the organic matter becomes altered, specifically through the loss of hydrogen in the form of methane.

The improved technique enables scientists to more accurately interpret the meaning of existing Raman spectra, and quickly evaluate the ratio of hydrogen to carbon -- thereby identifying the most pristine, ancient samples of rocks for further study. Summons says this may also help scientists and engineers working with the SHERLOC instrument on the 2020 Mars rover to zero in on ideal Martian samples.

"This may help in deciding what samples the 2020 rover will archive," Summons says. "It will be looking for organic matter preserved in sediments, and this will allow a more informed selection of samples for potential return to Earth."

A Raman spectrum represents the vibration of a molecule or atom, in response to laser light. A typical spectrum for a sample containing organic matter appears as a curve with two main peaks -- one wide peak, and a sharper, more narrow peak. Researchers have previously labeled the wide peak as the D (disordered) band, as vibrations in this region correlate with carbon atoms that have a disordered makeup, bound to any number of other elements. The second, more narrow peak is the G (graphite) band, which is typically related to more ordered arrangements of carbon, such as is found in graphitic materials.

Ferralis, working with ancient sediment samples being investigated in the Summons' lab, identified substructures within the main D band that are directly related to the amount of hydrogen in a sample. That is, the higher these sub-peaks, the more hydrogen is present -- an indication that the sample has been relatively less altered, and its original chemical makeup better preserved.

To test this new interpretation, the team sought to apply Raman spectroscopy, and their analytic technique, to samples of sediments whose chemical composition was already known. They obtained additional samples of ancient kerogen -- fragments of organic matter in sedimentary rocks -- from a team based at the University of California at Los Angeles, who in the 1980s had used meticulous, painstaking chemical methods to accurately determine the ratio of hydrogen to carbon.

The team quickly estimated the same ratio, first using Raman spectroscopy to generate spectra of the various kerogen samples, then using their method to interpret the peaks in each spectrum. The team's ratios of hydrogen to carbon closely matched the original ratios.

"This means our method is sound, and we don't need to do an insane or impossible amount of chemical purification to get a precise answer," Summons says.

Going a step further, the researchers wondered whether they could use their technique to map the chemical composition of a microscopic fossil, which ordinarily would contain so little carbon that it would be undetectable by traditional chemistry techniques.

"We were wondering, could we map across a single microscopic fossil and see if any chemical differences were preserved?" Summons says.

Optical micrographs of a protist fossil from silicified coastal carbonates. Raman mapping was carried out at low magnification over the full fossil (right), and at high magnification (left). Cell walls, collapsed cell contents, and quartz infilling cement are indicated by the red, blue and green arrows, respectively. 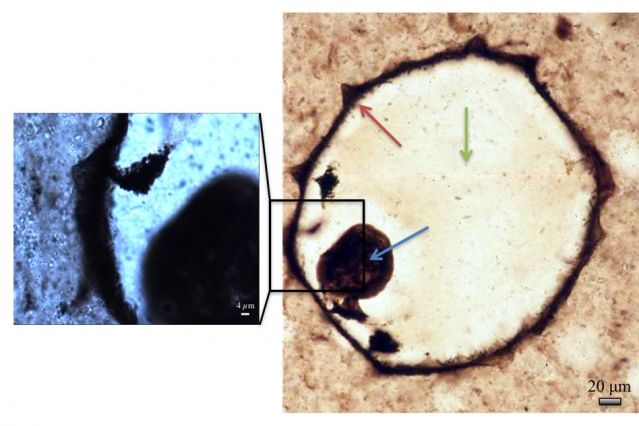 To answer that question, the team obtained a microscopic fossil of a protist -- an ancient, single-celled organism that could represent a simple alga or its predator. Scientists deduce that such fossils were once biological in origin, simply from their appearance and their similarity to hundreds of other patterns in the fossil record.

The team used Raman spectroscopy to measure the atomic vibrations throughout the fossil, at a sub-micron resolution, and then analyzed the resulting spectra using their new analytic technique. They then created a chemical map based on their analysis.

"The fossil has seen the same thermal history throughout, and yet we found the cell wall and cell contents have higher hydrogen than the cell's matrix or its exterior," Summons says. "That to me is evidence of biology. It might not convince everybody, but it's a significant improvement than what we had before."

Ultimately, Summons says that, in addition to identifying promising samples on Mars, the group's technique will help paleontologists understand Earth's own biological evolution.

"We're interested in the oldest organic matter preserved on the planet that might tell us something about the physiologies of Earth's earliest forms of cellular life," Summons says. "We're hoping to understand, for example, when did the biological carbon cycle that we have on the Earth today first appear? How did it evolve over time? This technique will ultimately help us to find organic matter that is minimally altered, to help us learn more about what organisms were made of, and how they worked."

This work was supported by Shell Oil Company and Schlumberger through the X-Shale Consortium under the MIT-Energy Initiative, and Extramural Research by Shell Innovation Research and Development, The Simons Foundation Collaboration on the Origins of Life, the NASA Astrobiology Institute, and the Max Planck Society.