The pursuit of next-generation technologies places a premium on producing increased speed and efficiency with components built at scales small enough to function on a computer chip.

One of the barriers to advances in "on-chip" communications is the size of the electromagnetic waves at radio and microwave frequencies, which form the backbone of modern wireless technology. The relatively large waves handcuff further miniaturization. 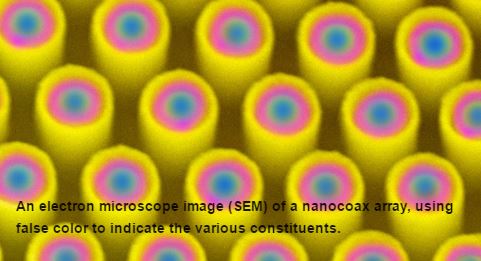 Scientists trying to surpass these limitations are exploring the potential of optical conveyance that exploits the properties of much smaller wavelengths, such as those in the terahertz, infrared and visible frequencies.

A team of researchers at Boston College has developed the first nanoscale wireless communication system that operates at visible wavelengths using antennas that send and receive surface plasmons with an unprecedented degree of control, the team reports in the latest edition of the journal Nature's Scientific Reports.

Furthermore, the device affords an "in-plane" configuration, a prized class of two-way information transmission and recovery in a single path, according to the study, conducted by a team in the lab of Evelyn J. and Robert A. Ferris Professor of Physics Michael J. Naughton.

Surface plasmons possess unique subwavelength capabilities. Researchers trying to exploit those features have developed metallic structures, including plasmonic antennas. But a persistent problem has been the inability to achieve 'in-line' containment of the emission and collection of the electromagnetic radiation.

A Boston College team has developed a device with a three-step conversion process that changes a surface plasmon to a photon on transmission and then converts that elemental electromagnetic particle back to a surface plasmon as the receiver picks it up. The device, illustrated in this video, offers an unprecedented degree of control in this approach to faster, more efficient communications to power computers and optical technologies.

The findings mark an important first step toward a nanoscale version - and visible frequency equivalent - of existing wireless communication systems, according to the researchers. Such on-chip systems could be used for high-speed communication, high efficiency plasmonic waveguiding and in-plane circuit switching - a process that is currently used in liquid crystal displays.

The device could speed the transmission of information by as much as 60 percent compared to earlier plasmonic waveguiding techniques and up to 50 percent faster than plasmonic nanowire waveguides, the team reports.

Surface plasmons are the oscillations of electrons coupled to the interface of an electromagnetic field and a metal. Among their unique abilities, surface plasmons can confine energy on that interface by fitting into spaces smaller than the waves themselves.

Researchers trying to exploit these subwavelength capabilities of surface plasmons have developed metallic structures, including plasmonic antennas. But a persistent problem has been the inability to achieve "in-line" containment of the emission and collection of the electromagnetic radiation.

The BC team developed a device with a three-step conversion process that changes a surface plasmon to a photon on transmission and then converts that elemental electromagnetic particle back to a surface plasmon as the receiver picks it up.

"We have developed a device where plasmonic antennas communicate with each other with photons transmitting between them," said Naughton. "This is done with high efficiency, with energy loss reduced by 50 percent between one antenna and the next, which is a significant enhancement over comparable architectures."

Central to the newfound control of the surface plasmons was the creation of a small gap of air between the waves and the silver surface of the device, said Merlo, who earned his PhD at Mexico's National Institute of Astrophysics, Optics and Electronics. By removing a portion of the glass substrate, the team reduced the disruptive pull of the material on the photons in transmission. Expanding and narrowing that gap proved crucial to tuning the device.

With traditional silicon waveguides, dispersion reduces information transmission speed. Without that impediment, the new device capitalizes on the capability of surface plasmons to travel at 90 to 95 percent of the speed of light on a silver surface and photons traveling between the antennas at their inherent speed of light, Merlo said.

"Silicon-based optical technology has been around for years," said Merlo. "What we are doing is improving it to make it faster. We're developing a tool to make silicon photonics faster and greatly enhance rates of communication."

The full report can be found at: http://www.nature.com/articles/srep31710