In the race to discover a proposed ninth planet in our Solar System, Carnegie's Scott Sheppard and Chadwick Trujillo of Northern Arizona University have observed several never-before-seen objects at extreme distances from the Sun in our Solar System. Sheppard and Trujillo have now submitted their latest discoveries to the International Astronomical Union's Minor Planet Center for official designations. A paper about the discoveries has also been accepted to The Astronomical Journal.

The more objects that are found at extreme distances, the better the chance of constraining the location of the ninth planet that Sheppard and Trujillo first predicted to exist far beyond Pluto (itself no longer classified as a planet) in 2014. The placement and orbits of small, so-called extreme trans-Neptunian objects, can help narrow down the size and distance from the Sun of the predicted ninth planet, because that planet's gravity influences the movements of the smaller objects that are far beyond Neptune. The objects are called trans-Neptunian because their orbits around the Sun are greater than Neptune's.


An illustration of the orbits of the new and previously known extremely distant solar system objects. The clustering of most of their orbits indicates that they are likely be influenced by something massive and very distant, the proposed Planet X. 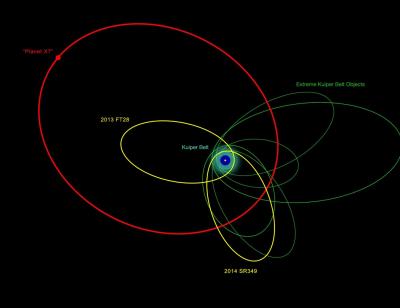 
In 2014, Sheppard and Trujillo announced the discovery of 2012 VP113 (nicknamed "Biden"), which has the most-distant known orbit in our Solar System. At this time, Sheppard and Trujillo also noticed that the handful of known extreme trans-Neptunian objects all cluster with similar orbital angles. This lead them to predict that there is a planet at more than 200 times our distance from the Sun. Its mass, ranging in possibility from several Earths to a Neptune equivalent, is shepherding these smaller objects into similar types of orbits.

Some have called this Planet X or Planet 9. Further work since 2014 showed that this massive ninth planet likely exists by further constraining its possible properties. Analysis of "neighboring" small body orbits suggest that it is several times more massive than the Earth, possibly as much as 15 times more so, and at the closest point of its extremely stretched, oblong orbit it is at least 200 times farther away from the Sun than Earth. (This is over 5 times more distant than Pluto.)

"Objects found far beyond Neptune hold the key to unlocking our Solar System's origins and evolution," Sheppard explained. "Though we believe there are thousands of these small objects, we haven't found very many of them yet, because they are so far away. The smaller objects can lead us to the much bigger planet we think exists out there. The more we discover, the better we will be able to understand what is going on in the outer Solar System."

Sheppard and Trujillo, along with David Tholen of the University of Hawaii, are conducting the largest, deepest survey for objects beyond Neptune and the Kuiper Belt and have covered nearly 10 percent of the sky to date using some of the largest and most advanced telescopes and cameras in the world, such as the Dark Energy Camera on the NOAO 4-meter Blanco telescope in Chile and the Japanese Hyper Suprime Camera on the 8-meter Subaru telescope in Hawaii. As they find and confirm extremely distant objects, they analyze whether their discoveries fit into the larger theories about how interactions with a massive distant planet could have shaped the outer Solar System.

"Right now we are dealing with very low-number statistics, so we don't really understand what is happening in the outer Solar System," Sheppard said. "Greater numbers of extreme trans-Neptunian objects must be found to fully determine the structure of our outer Solar System."

An artist's conception of Planet X 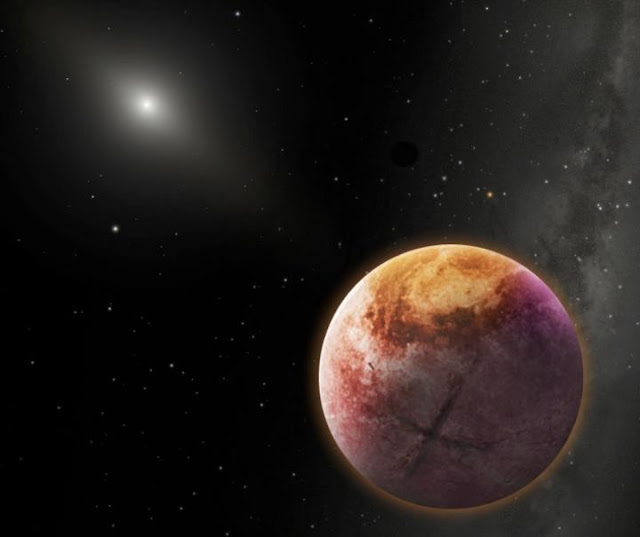 
According to Sheppard, "we are now in a similar situation as in the mid-19th century when Alexis Bouvard noticed Uranus' orbital motion was peculiar, which eventually led to the discovery of Neptune."

The new objects they have submitted to the Minor Planet Center for designation include 2014 SR349, which adds to the class of the rare extreme trans-Neptunian objects. It exhibits similar orbital characteristics to the previously known extreme bodies whose positions and movements led Sheppard and Trujillo to initially propose the influence of Planet X.

Another discovery, 2014 FE72, is the first distant Oort Cloud object found with an orbit entirely beyond Neptune. It has an orbit that takes the object so far away from the Sun (some 3000 times farther than Earth) that it is likely being influenced by forces of gravity from beyond our Solar System such as other stars and the galactic tide. It is the first object observed at such a large distance.