Fracking Earthquake Risks Can Be Lessened

New research from the U.S. Geological Survey and the University of Colorado shows actions taken by drillers and regulators can lessen risk in the case of earthquakes likely caused by the injection of industrial wastewater deep underground.

While the earthquake that rumbled below Colorado’s eastern plains May 31, 2014, did no major damage, its occurrence surprised both Greeley residents and local seismologists. To some Greeley residents, the magnitude 3.2 earthquake felt like a large truck hitting the house.

The earthquake happened in an area that had seen no seismic activity in at least four decades, according to a new analysis by a team of Colorado researchers. It was likely caused by the injection of industrial wastewater deep underground—and, the team concluded, quick action taken by scientists, regulators and industry may have reduced the risk of larger quakes in the area. 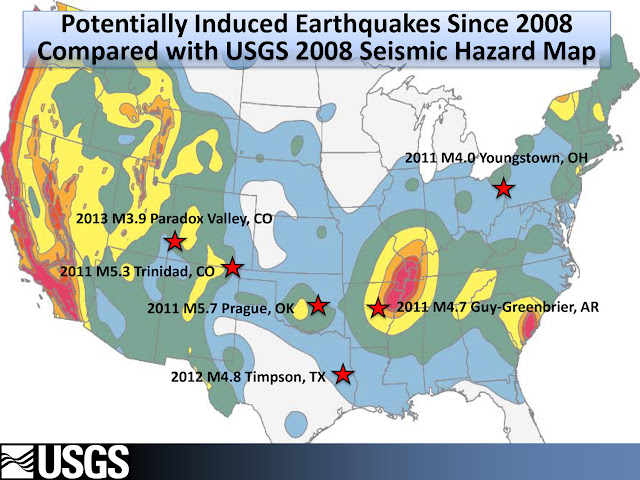 “We were surprised to observe an earthquake right in our backyard, and we knew we needed to know more, so we quickly mobilized seismic monitoring equipment," said Will Yeck, lead author of the study. "As it turned out, our findings were not just scientifically interesting. By sharing our observations with others in real time, we were able to help inform the decisions made to mitigate these earthquakes. It was extremely rewarding to see our scientific observations have a direct and immediate impact.”

Yeck, then finishing up his Ph.D. in geophysics at the University of Colorado Boulder, and now a researcher with the USGS, worked with a team of researchers that included his Ph.D. advisor Anne Sheehan, a professor and CIRES Fellow, two other graduate students and a USGS colleague. Their work appears in the July-August issue of Seismological Research Letters.

A few minutes after 10 p.m. the night of the earthquake, Sheehan also received an email from a neighbor who had felt an earthquake at her home in Boulder. The neighbor quickly looked up the initial details through a USGS website, and relayed them to Sheehan. It looked like the earthquake was centered in the heart of oil and gas country in Weld County, where drillers sometimes disposed of wastewater deep underground—an activity now known to sometimes trigger earthquakes.

In many homes near the earthquake’s epicenter, furniture shifted in rooms. Bricks fell off at least one chimney.

“The next day was very busy,” said Sheehan.

She requested seismometers from a consortium that rapidly supplies equipment for earthquake aftershock monitoring. She began talking with her graduate students, colleagues from the USGS and the oil and gas industry, and regulators about where to deploy the equipment.

The first week of June, Yeck and fellow graduate students Jenny Nakai and Matthew Weingarten deployed six seismometers in an array around the earthquake’s epicenter to monitor further seismic activity. As data flowed in, they analyzed it in detail to pinpoint the locations and the timing of smaller earthquakes following that first one.

The geophysicists communicated their findings with state oil and gas regulators and wastewater disposal company staff, and helped those staff learn to read and understand real-time seismic data themselves.

It quickly became clear that the earthquakes were centered under one specific well: the wastewater disposal well closest to the Greeley earthquake epicenter which happened to be the highest‐rate injection well in northeast Colorado in 2013, according to data compiled by the state. The well had been pumping an average of 250,000 barrels per month since August 2013, more than a mile deep.

“Soon after the magnitude 3.2 earthquake, when the seismic network was in place, we shared earthquake locations and earthquake magnitude frequency with the Colorado Oil and Gas Conservation Commission and local energy companies to better inform them of seismic activity occurring around the wells,” said Jenny Nakai, a co-author of the new study and a graduate student in geophysics at CU Boulder. “We could see fluctuations in seismic activity as the well was shut down and cemented.”

Injection stopped on June 24 for a month, and the company that drilled the disposal well took two actions to reduce seismicity: They reduced injection rates and used cement to plug the bottom of the well, impeding fluid interaction with deeper, subsurface faults.

Injection resumed a month later at reduced rates, starting at just 5,000 barrels a day mid-July. The injection rates were slowly increased over time.

Seismicity dropped, the team found. Following mitigation, between August 13, 2014, and December 29, 2015, no earthquakes larger than magnitude 1.5 occurred near Greeley.

The research team also used data from more distant seismometers, deployed well before the 2014 earthquake, to detect past seismic activity in the area. They found the Greeley earthquake sequence began roughly four months after the initiation of high-rate wastewater injection in 2013. Their analysis suggested that the biggest observed earthquakes in the area were getting bigger over time, an observation made at other injection induced earthquake locations as well.

State regulators with the Colorado Oil and Gas Conservation Commission modified requirements as a result of the seismology team’s findings, Yeck and his colleagues reported in the paper. Regulators began requiring seismic monitoring at recently permitted commercial disposal wells pumping more than 10,000 barrels per day.

Greeley-area seismicity continues to be monitored both by the CU Boulder team and by an independent contractor.