Even in the Early-universe Cosmic Neighbors Inhibited Star Formation


The international University of California, Riverside-led SpARCS collaboration has discovered four of the most distant clusters of galaxies ever found, as they appeared when the universe was only 4 billion years old.

Clusters are rare regions of the universe consisting of hundreds of galaxies containing trillions of stars, as well as hot gas and mysterious dark matter. Spectroscopic observations from the ground using the W. M. Keck Observatory in Hawaii and the Very Large Telescope in Chile confirmed the four candidates to be massive clusters. This sample is now providing the best measurement yet of when and how fast galaxy clusters stop forming stars in the early Universe. 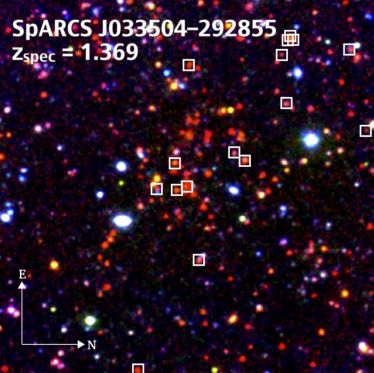 "We looked at how the properties of galaxies in these clusters differed from galaxies found in more typical environments with fewer close neighbors," said Julie Nantais, an assistant professor at the Andres Bello University in Chile and the first author of the research paperthat appears in the August 2016 issue of Astronomy and Astrophysics.

"It has long been known that when a galaxy falls into a cluster, interactions with other cluster galaxies and with hot gas accelerate the shut off of its star formation relative to that of a similar galaxy in the field, in a process known as environmental quenching. The SpARCS team has developed new techniques using Spitzer Space Telescope infrared observations to identify hundreds of previously-undiscovered clusters of galaxies in the distant universe." 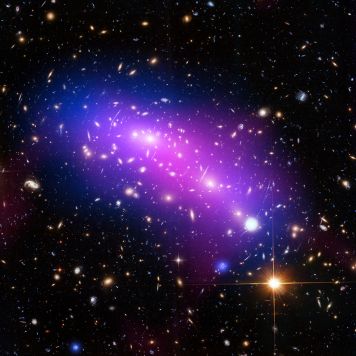 The paper concludes that about 30 percent of the galaxies which would normally be forming stars have been quenched in the distant clusters, compared to the much higher value of about 50 percent found in nearby clusters.

Several possible physical processes could be responsible for causing environmental quenching. For example, the hot, harsh cluster environment might prevent the galaxy from continuing to accrete cold gas and form new stars, a process astronomers have named "starvation." Alternatively, the quenching could be caused by interactions with other galaxies in the cluster. These galaxies might "harass" (undergo frequent, high speed, gravitationally-disturbing encounters), tidally strip (pull material from a smaller galaxy to a larger one) or merge (two or more galaxies joining together) with the first galaxy to stop its star formation.

While the current study does not answer the question of which process is primarily responsible, it is nonetheless hugely important because it provides the most accurate measurement yet of how much environmental quenching has occurred in the early universe. Moreover, the study provides an all-important early-universe benchmark by which to judge upcoming predictions from competing computational numerical simulations which make different assumptions about the relative importance of the many different environmental quenching processes which have been suggested, and the timescales upon which they operate.

Contacts and sources:
Iqbal Pittalwala
University of California
on August 25, 2016