Astronomers using ESO telescopes and other facilities have found clear evidence of a planet orbiting the closest star to Earth, Proxima Centauri. The long-sought world, designated Proxima b, orbits its cool red parent star every 11 days and has a temperature suitable for liquid water to exist on its surface. This rocky world is a little more massive than the Earth and is the closest exoplanet to us -- and it may also be the closest possible abode for life outside the Solar System. A paper describing this milestone finding will be published in the journal Nature on 25 August 2016.

This artist's impression shows a view of the surface of the planet Proxima b orbiting the red dwarf star Proxima Centauri, the closest star to the Solar System. The double star Alpha Centauri AB also appears in the image to the upper-right of Proxima itself. Proxima b is a little more massive than the Earth and orbits in the habitable zone around Proxima Centauri, where the temperature is suitable for liquid water to exist on its surface. 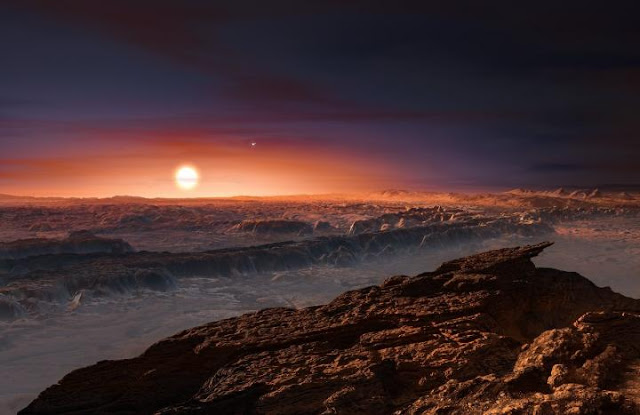 
The Pale Red Dot campaign aimed to find a planet orbiting our nearest stellar neighbor, Proxima Centauri. Incredibly, the quest succeeded and the team did indeed find a planet. Even more excitingly, the planet, Proxima b, falls within the habitable zone of its host star. The newly discovered Proxima b is by far the closest potential abode for alien life.


Just over four light-years from the Solar System lies a red dwarf star that has been named Proxima Centauri as it is the closest star to Earth apart from the Sun. This cool star in the constellation of Centaurus is too faint to be seen with the unaided eye and lies near to the much brighter pair of stars known as Alpha Centauri AB.

This infographic compares the orbit of the planet around Proxima Centauri (Proxima b) with the same region of the Solar System. Proxima Centauri is smaller and cooler than the Sun and the planet orbits much closer to its star than Mercury. As a result it lies well within the habitable zone, where liquid water can exist on the planet’s surface. 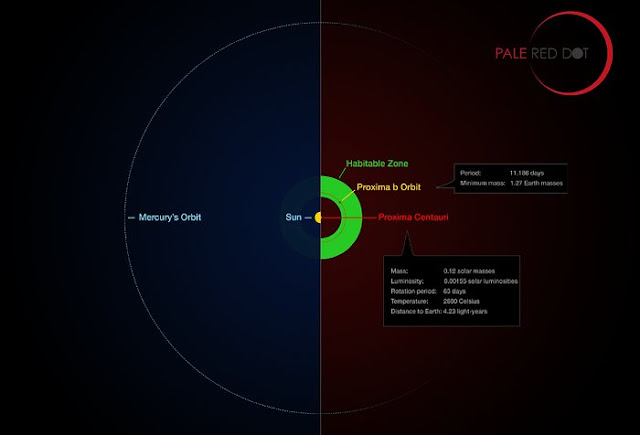 This artist’s impression video shows a view of the planet Proxima b orbiting the red dwarf star Proxima Centauri, the closest star to the Solar System. The double star Alpha Centauri AB also appears in the image between Proxima and the planet. Proxima b is a little more massive than the Earth and orbits in the habitable zone around Proxima Centauri, where the temperature is suitable for liquid water to exist on its surface.

During the first half of 2016 Proxima Centauri was regularly observed with the HARPS spectrograph on the ESO 3.6-metre telescope at La Silla in Chile and simultaneously monitored by other telescopes around the world [1]. This was the Pale Red Dot campaign, in which a team of astronomers led by Guillem Anglada-Escudé, from Queen Mary University of London, was looking for the tiny back and forth wobble of the star that would be caused by the gravitational pull of a possible orbiting planet [2].

As this was a topic with very wide public interest, the progress of the campaign between mid-January and April 2016 was shared publicly as it happened on the Pale Red Dot website and via social media. The reports were accompanied by numerous outreach articles written by specialists around the world.


Guillem Anglada-Escudé explains the background to this unique search: "The first hints of a possible planet were spotted back in 2013, but the detection was not convincing. Since then we have worked hard to get further observations off the ground with help from ESO and others. The recent Pale Red Dot campaign has been about two years in the planning."

An angular size comparison of how Proxima will appear in the sky seen from Proxima b, compared to how the Sun appears in our sky on Earth. Proxima is much smaller than the Sun, but Proxima b lies very close to its star. 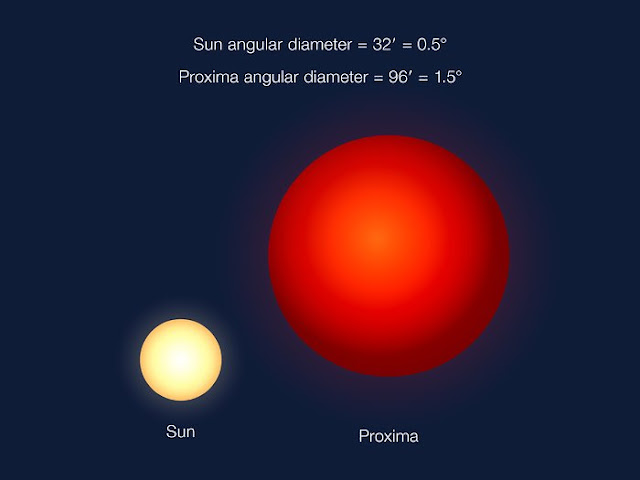 
The Pale Red Dot data, when combined with earlier observations made at ESO observatories and elsewhere, revealed the clear signal of a truly exciting result. At times Proxima Centauri is approaching Earth at about 5 kilometres per hour -- normal human walking pace -- and at times receding at the same speed. This regular pattern of changing radial velocities repeats with a period of 11.2 days. Careful analysis of the resulting tiny Doppler shifts showed that they indicated the presence of a planet with a mass at least 1.3 times that of the Earth, orbiting about 7 million kilometres from Proxima Centauri -- only 5% of the Earth-Sun distance [3].

Guillem Anglada-Escudé comments on the excitement of the last few months: "I kept checking the consistency of the signal every single day during the 60 nights of the Pale Red Dot campaign. The first 10 were promising, the first 20 were consistent with expectations, and at 30 days the result was pretty much definitive, so we started drafting the paper!"

Red dwarfs like Proxima Centauri are active stars and can vary in ways that would mimic the presence of a planet. To exclude this possibility the team also monitored the changing brightness of the star very carefully during the campaign using the ASH2 telescope at the San Pedro de Atacama Celestial Explorations Observatory in Chile and the Las Cumbres Observatory telescope network. Radial velocity data taken when the star was flaring were excluded from the final analysis.

Although Proxima b orbits much closer to its star than Mercury does to the Sun in the Solar System, the star itself is far fainter than the Sun. As a result Proxima b lies well within the habitable zone around the star and has an estimated surface temperature that would allow the presence of liquid water. Despite the temperate orbit of Proxima b, the conditions on the surface may be strongly affected by the ultraviolet and X-ray flares from the star -- far more intense than the Earth experiences from the Sun [4].

The relative sizes of a number of objects, including the three (known) members of Alpha Centauri triple system and some other stars for which the angular sizes have also been measured with the Very Large Telescope Interferometer (VLTI) at the ESO Paranal Observatory. The Sun and planet Jupiter are also shown for comparison. 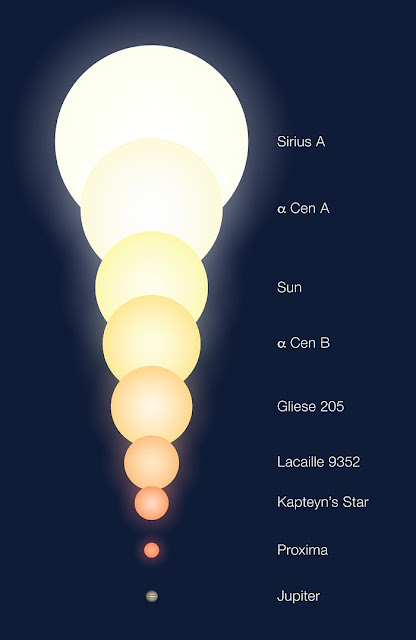 Two separate papers discuss the habitability of Proxima b and its climate. They find that the existence of liquid water on the planet today cannot be ruled out and, in such case, it may be present over the surface of the planet only in the sunniest regions, either in an area in the hemisphere of the planet facing the star (synchronous rotation) or in a tropical belt (3:2 resonance rotation). Proxima b's rotation, the strong radiation from its star and the formation history of the planet makes its climate quite different from that of the Earth, and it is unlikely that Proxima b has seasons.

This image of the sky around the bright star Alpha Centauri AB also shows the much fainter red dwarf star, Proxima Centauri, the closest star to the Solar System. The picture was created from pictures forming part of the Digitized Sky Survey 2. The blue halo around Alpha Centauri AB is an artifact of the photographic process, the star is really pale yellow in colour like the Sun. 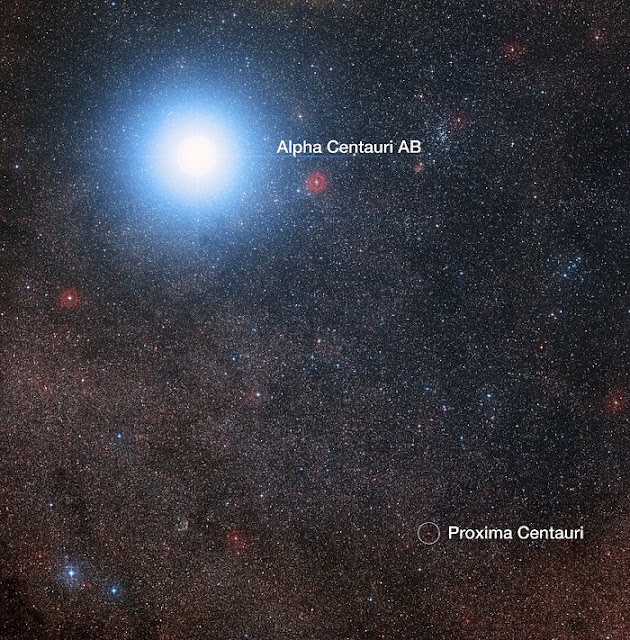 Credit: Digitized Sky Survey 2 Acknowledgement: Davide De Martin/Mahdi Zamani
This discovery will be the beginning of extensive further observations, both with current instruments [5] and with the next generation of giant telescopes such as the European Extremely Large Telescope (E-ELT). Proxima b will be a prime target for the hunt for evidence of life elsewhere in the Universe. Indeed, the Alpha Centauri system is also the target of humankind's first attempt to travel to another star system, the StarShot project.

Guillem Anglada-Escudé concludes: "Many exoplanets have been found and many more will be found, but searching for the closest potential Earth-analogue and succeeding has been the experience of a lifetime for all of us. Many people's stories and efforts have converged on this discovery. The result is also a tribute to all of them. The search for life on Proxima b comes next..."


On 24 August 2016 at 13:00 CEST, ESO hosted a press conference at its Headquarters in Garching, near Munich, Germany.


Notes:
[1] Besides data from the recent Pale Red Dot campaign, the paper incorporates contributions from scientists who have been observing Proxima Centauri for many years. These include members of the original UVES/ESO M-dwarf programme (Martin Kürster and Michael Endl), and exoplanet search pioneers such as R. Paul Butler. Public observations from the HARPS/Geneva team obtained over many years were also included.

[2] The name Pale Red Dot reflects Carl Sagan's famous reference to the Earth as a pale blue dot. As Proxima Centauri is a red dwarf star it will bathe its orbiting planet in a pale red glow.

[3] The detection reported today has been technically possible for the last 10 years. In fact, signals with smaller amplitudes have been detected previously. However, stars are not smooth balls of gas and Proxima Centauri is an active star. The robust detection of Proxima b has only been possible after reaching a detailed understanding of how the star changes on timescales from minutes to a decade, and monitoring its brightness with photometric telescopes.

[4] The actual suitability of this kind of planet to support water and Earth-like life is a matter of intense but mostly theoretical debate. Major concerns that count against the presence of life are related to the closeness of the star. For example gravitational forces probably lock the same side of the planet in perpetual daylight, while the other side is in perpetual night. The planet's atmosphere might also slowly be evaporating or have more complex chemistry than Earth's due to stronger ultraviolet and X-ray radiation, especially during the first billion years of the star's life. However, none of the arguments has been proven conclusively and they are unlikely to be settled without direct observational evidence and characterisation of the planet's atmosphere. Similar factors apply to the planets recently found around TRAPPIST-1.

[5] Some methods to study a planet's atmosphere depend on it passing in front of its star and the starlight passing through the atmosphere on its way to Earth. Currently there is no evidence that Proxima b transits across the disc of its parent star, and the chances of this happening seem small, but further observations to check this possibility are in progress.
on August 24, 2016