"Nepotism has likely played a vital role in the evolution of family life in this species," said Martha Nelson-Flower, a postdoctoral fellow at the University of British Columbia's faculty of forestry but formerly of the University of Cape Town, where she conducted the research.

The species is the southern pied babbler, a black and white bird found in Botswana, Namibia, South Africa and Zimbabwe. The bird lives in groups, and chicks are raised by both parents as well as other adult birds. The groups can range in size from three to up to 14 birds.' 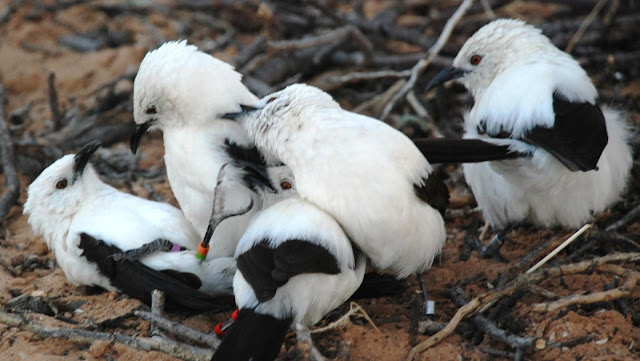 Over the course of five years in the summer, Nelson-Flower observed 45 different groups of southern pied babblers in the Kalahari Desert, walking around with the birds at dawn and dusk. She also relied on data collected by her co-author, Amanda Ridley, of the University of Western Australia. Combined, the researchers analyzed data from 11 years of observation.

The preferential treatment seen in the male birds was not observed among the females.

"The research is some of the first to show that the sex of both dominant and subordinate birds, and the genetic relationship between them, has a significant impact on their family groups and cooperative breeding behavior," said Nelson-Flower.

Previous work on the southern pied babbler has shown negative outcomes for birds who live alone for longer periods, including a decreased likelihood of attaining dominance in another group and increased weight loss.