Maybe she was pushed?

Lucy, the most famous fossil of a human ancestor, probably died after falling from a tree, according to a study appearing in Nature led by researchers at The University of Texas at Austin.

Lucy, a 3.18-million-year-old specimen of Australopithecus afarensis — or “southern ape of Afar” — is among the oldest, most complete skeletons of any adult, erect-walking human ancestor. Since her discovery in the Afar region of Ethiopia in 1974 by Arizona State University anthropologist Donald Johanson and graduate student Tom Gray, Lucy — a terrestrial biped — has been at the center of a vigorous debate about whether this ancient species also spent time in the trees.

“It is ironic that the fossil at the center of a debate about the role of arborealism in human evolution likely died from injuries suffered from a fall out of a tree,” said lead author John Kappelman, a UT Austin anthropology and geological sciences professor.

UT Austin professor John Kappelman with 3D printouts of Lucy’s skeleton illustrating the compressive fractures in her right humerus that she suffered at the time of her death 3.18 million years ago. 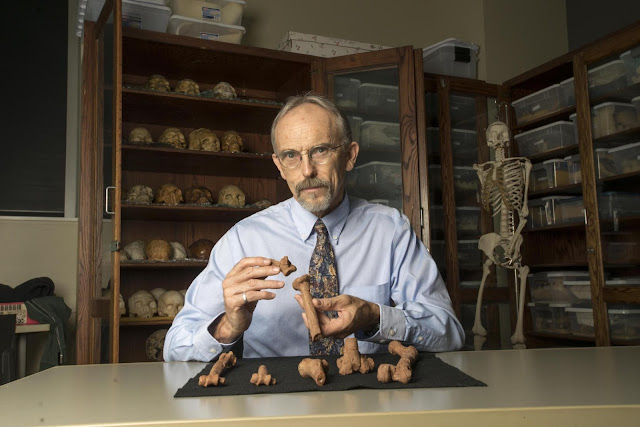 Kappelman first studied Lucy during her U.S. museum tour in 2008, when the fossil detoured to the High-Resolution X-ray Computed Tomography Facility (UTCT) in the UT Jackson School of Geosciences — a machine designed to scan through materials as solid as a rock and at a higher resolution than medical CT. For 10 days, Kappelman and geological sciences professor Richard Ketcham carefully scanned all of her 40-percent-complete skeleton to create a digital archive of more than 35,000 CT slices.

“Lucy is precious. There’s only one Lucy, and you want to study her as much as possible,” Ketcham said. “CT is nondestructive. So you can see what is inside, the internal details and arrangement of the internal bones.”

Studying Lucy and her scans, Kappelman noticed something unusual: The end of the right humerus was fractured in a manner not normally seen in fossils, preserving a series of sharp, clean breaks with tiny bone fragments and slivers still in place.

“This compressive fracture results when the hand hits the ground during a fall, impacting the elements of the shoulder against one another to create a unique signature on the humerus,” said Kappelman, who consulted Dr. Stephen Pearce, an orthopedic surgeon at Austin Bone and Joint Clinic, using a modern human-scale, 3-D printed model of Lucy.

Pearce confirmed: The injury was consistent with a four-part proximal humerus fracture, caused by a fall from considerable height when the conscious victim stretched out an arm in an attempt to break the fall.

Kappelman observed similar but less severe fractures at the left shoulder and other compressive fractures throughout Lucy’s skeleton including a pilon fracture of the right ankle, a fractured left knee and pelvis, and even more subtle evidence such as a fractured first rib — “a hallmark of severe trauma” — all consistent with fractures caused by a fall. Without any evidence of healing, Kappelman concluded the breaks occurred perimortem, or near the time of death.

The question remained: How could Lucy have achieved the height necessary to produce such a high velocity fall and forceful impact? Kappelman argued that because of her small size — about 3 feet 6 inches and 60 pounds — Lucy probably foraged and sought nightly refuge in trees.

In comparing her with chimpanzees, Kappelman suggested Lucy probably fell from a height of more than 40 feet, hitting the ground at more than 35 miles per hour. Based on the pattern of breaks, Kappelman hypothesized that she landed feet-first before bracing herself with her arms when falling forward, and “death followed swiftly.”

“When the extent of Lucy’s multiple injuries first came into focus, her image popped into my mind’s eye, and I felt a jump of empathy across time and space,” Kappelman said. “Lucy was no longer simply a box of bones but in death became a real individual: a small, broken body lying helpless at the bottom of a tree.”

Kappelman conjectured that because Lucy was both terrestrial and arboreal, features that permitted her to move efficiently on the ground may have compromised her ability to climb trees, predisposing her species to more frequent falls. Using fracture patterns when present, future research may tell a more complete story of how ancient species lived and died.

In addition to the study, the Ethiopian National Museum provided access to a set of 3-D files of Lucy’s shoulder and knee for the public to download and print so that they can evaluate the hypothesis for themselves. “This is the first time 3-D files have been released for any Ethiopian fossil hominin, and the Ethiopian officials are to be commended,” Kappelman said. “Lucy is leading the charge for the open sharing of digital data.”

Other scholastic materials and the 3-D files are available on eLucy.org. Permissions to scan, study and photograph Lucy were granted by the Authority for Research and Conservation of Cultural Heritage and the National Museum of Ethiopia of the Ministry of Tourism and Culture. The UTCT was supported by three grants from the U.S. National Science Foundation.

Contacts and sources:
David Ochsner
The University of Texas at Austin
on August 31, 2016