Gamma-ray bursts, or GRBs, are some of the most violent and energetic events in the Universe. Although these events are the most luminous explosions in the universe, a new study using NASA's Chandra X-ray Observatory, NASA's Swift satellite and other telescopes suggests that scientists may be missing a majority of these powerful cosmic detonations.

Astronomers think that some GRBs are the product of the collision and merger of twoneutron stars or a neutron star and a black hole. The new research gives the best evidence to date that such collisions will generate a very narrow beam, or jet, of gamma rays. If such a narrow jet is not pointed toward Earth, the GRB produced by the collision will not be detected.

The large panel in the graphic is an illustration showing the aftermath of a neutron star merger, including the generation of a GRB. In the center is a compact object - either a black hole or a massive neutron star - and in red is a disk of material left over from the merger, containing material falling towards the compact object. Energy from this infalling material drives the GRB jet shown in yellow. In orange is a wind of particles blowing away from the disk and in blue is material ejected from the compact object and expanding at very high speeds of about one tenth the speed of light.

The image on the left of the two smaller panels shows an optical view from the Discovery Channel Telescope (DCT) with GRB 140903A in the middle of the square and a close-up X-ray view from Chandra on the right. The bright star in the optical image is unrelated to the GRB. 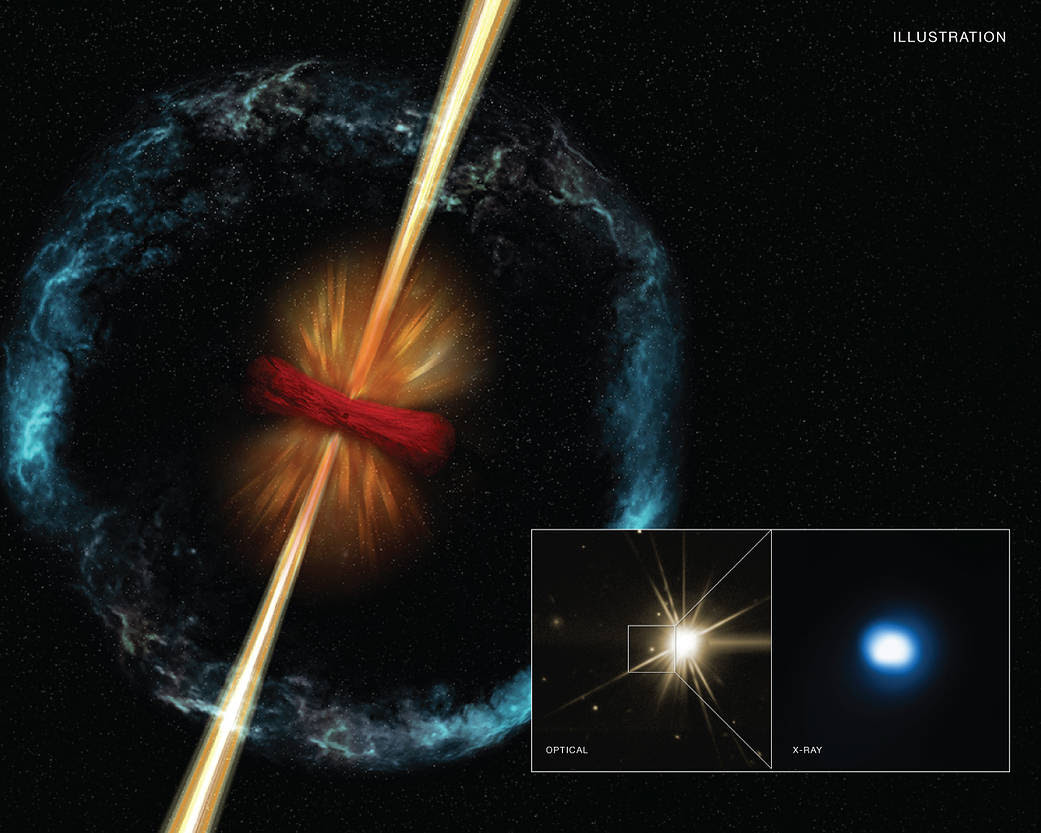 Collisions between two neutron stars or a neutron star and black hole are expected to be strong sources of gravitational waves that could be detected whether or not the jet is pointed towards the Earth. Therefore, this result has important implications for the number of events that will be detectable by the Laser Interferometry Gravitational-Wave Observatory (LIGO) and other gravitational wave observatories.

On September 3, 2014, NASA's Swift observatory picked up a GRB - dubbed GRB 140903A due to the date it was detected. Scientists used optical observations with the Gemini Observatory telescope in Hawaii to determine that GRB 140903A was located in a galaxy about 3.9 billion light years away, relatively nearby for a GRB.


The gamma-ray blast lasted less than two seconds. This placed it into the “short GRB” category, which astronomers think are the output from neutron star-neutron star or black hole-neutron star collisions eventually forming either a black hole or a neutron star with a strong magnetic field. (The scientific consensus is that GRBs that last longer than two seconds result from the collapse of a massive star.)

About three weeks after the Swift discovery of GRB 140903A, a team of researchers led by Eleonora Troja of the University of Maryland, College Park (UMD), observed the aftermath of the GRB in X-rays with Chandra. Chandra observations of how the X-ray emission from this GRB decreases over time provide important information about the properties of the jet.

Specifically, the researchers found that the jet is beamed into an angle of only about five degrees based on the X-ray observations, plus optical observations with the Gemini Observatory and the DCT and radio observations with the National Science Foundation’s Karl G. Jansky Very Large Array. This is roughly equivalent to a circle with the diameter of your three middle fingers held at arms length. This means that astronomers are detecting only about 0.4% of this type of GRB when it goes off, since in most cases the jet will not be pointed directly at us.

Previous studies by other astronomers had suggested that these mergers could produce narrow jets. However, the evidence in those cases was not as strong because the rapid decline in light was not observed at multiple wavelengths, allowing for explanations not involving jets.

Several pieces of evidence link this event to the merger of two neutron stars, or between a neutron star and black hole. These include the properties of the gamma ray emission, the old age and the low rate of stars forming in the GRB’s host galaxy and the lack of a bright supernova. In some previous cases strong evidence for this connection was not found.

New studies have suggested that such mergers could be the production site of elements heavier than iron, such as gold. Therefore, the rate of these events is also important to estimate the total amount of heavy elements produced by these mergers and compare it with the amounts observed in the Milky Way galaxy.

A paper describing these results was recently accepted for publication in The Astrophysical Journal and is available online. NASA's Marshall Space Flight Center in Huntsville, Alabama, manages the Chandra program for NASA's Science Mission Directorate in Washington. The Smithsonian Astrophysical Observatory in Cambridge, Massachusetts, controls Chandra's science and flight operations.

Contacts and sources:
Harvard-Smithsonian Center for Astrophysics
on July 15, 2016