The Great Red Spot on Jupiter Is Mysteriously Hot

Here on Earth, sunlight heats the atmosphere at altitudes well above the surface—for example, at 250 miles above our planet where the International Space Station orbits. Scientists have been stumped as to why temperatures in Jupiter’s upper atmosphere are comparable to those found at Earth, yet Jupiter is more than five times the distance from the sun. They wanted to know: if the sun isn’t the heat source, then what is? 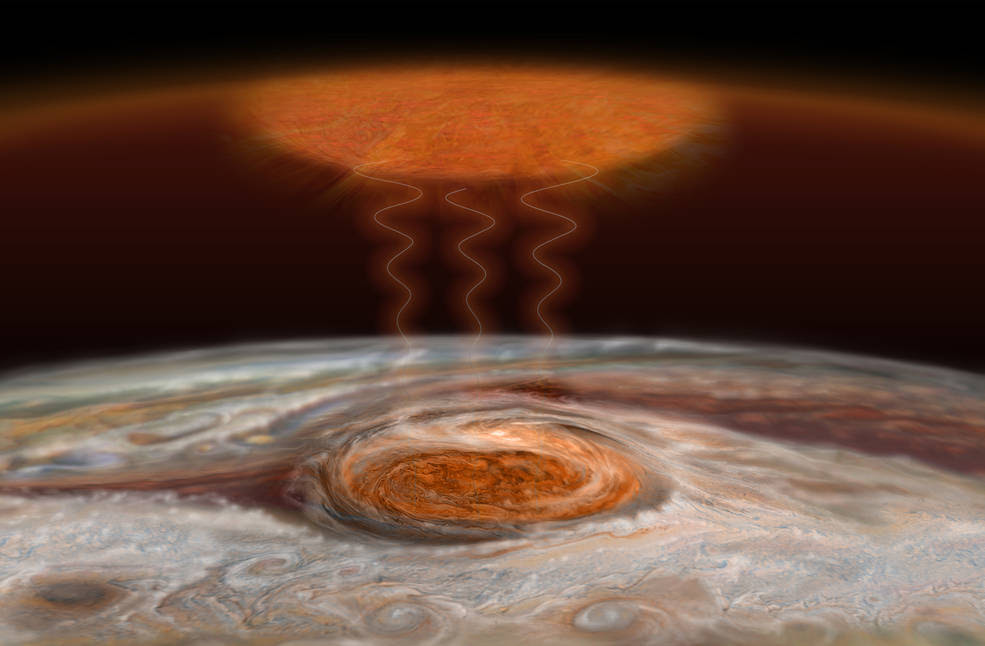 Researchers from Boston University’s Center for Space Physics set out to solve the mystery by mapping temperatures well above Jupiter’s cloud tops using observations from Earth. They analyzed data from the SpeX spectrometer at NASA’s Infrared Telescope Facility (IRTF) on Mauna Kea, Hawaii, a 3-meter infrared telescope operated for NASA by the University of Hawaii. By observing non-visible infrared light hundreds of miles above the gas giant, scientists found temperatures to be much higher in certain latitudes and longitudes in Jupiter’s southern hemisphere, where the spot is located.

“We could see almost immediately that our maximum temperatures at high altitudes were above the Great Red Spot far below—a weird coincidence or a major clue?” said Boston University’s James O’Donoghue, lead author of the study.

The study, in the July 27 issue of the journal Nature, concludes that the storm in the Great Red Spot produces two kinds of turbulent energy waves that collide and heat the upper atmosphere. Gravity waves are much like how a guitar string moves when plucked, while acoustic waves are compressions of the air (sound waves). Heating in the upper atmosphere 500 miles (800 kilometers) above the Great Red Spot is thought to be caused by a combination of these two wave types “crashing,” like ocean waves on a beach.

“The extremely high temperatures observed above the storm appear to be the ‘smoking gun’ of this energy transfer,” said O’Donoghue. “This tells us that planet-wide heating is a plausible explanation for the ‘energy crisis,’ a problem in which upper-atmospheric temperatures are measured hundreds of degrees hotter than can be explained by sunlight alone.”

This effect has been observed over the Andes Mountains here on Earth and may also be happening elsewhere in the outer solar system, though it has not been directly observed. Scientists believe this phenomenon also occurs on giant exoplanets orbiting other stars.

The Great Red Spot (GRS) has delighted and mystified since its discovery in the 17th Century. With its swirl of reddish hues, it’s 2-3 times as wide as Earth and is seen by many as a “perpetual hurricane,” with winds peaking at about 400 miles an hour.

NASA's Juno spacecraft, which recently arrived at Jupiter, will have several opportunities during its 20-month mission to observe the Great Red Spot and the turbulent region surrounding it. Juno will peer hundreds of miles downward into the atmosphere with its microwave radiometer, which passively senses heat coming from within the planet. This capability will enable Juno to reveal the deep structure of the Great Red Spot, along with other prominent Jovian features, such as the colorful cloud bands.