The Crab Nebula As Never Seen Before

This new NASA/ESA Hubble Space Telescope image reveals the beating heart of one of the most visually appealing, and most studied, supernova remnants known — the Crab Nebula. At the centre of this nebula the spinning core of a deceased star breathes life into the gas that surrounds it.

The Crab Nebula, which lies 6500 light-years away in the constellation of Taurus (The Bull), is the result of asupernova — a colossal explosion that was the dying act of a massive star. During this explosion most of the material that made up the star was blown into space at immense speeds, forming an expanding cloud of gas known as a supernova remnant.

While many other images of the famous Crab Nebula have focused on the filaments in the outer part of the nebula, this image shows the very heart of the Crab Nebula including the central neutron star — it is the rightmost of the two bright stars near the centre of this image.

The rapid motion of the material nearest to the central star is revealed by the subtle rainbow of colours in this time-lapse image, the rainbow effect being due to the movement of material over the time between one image and another. 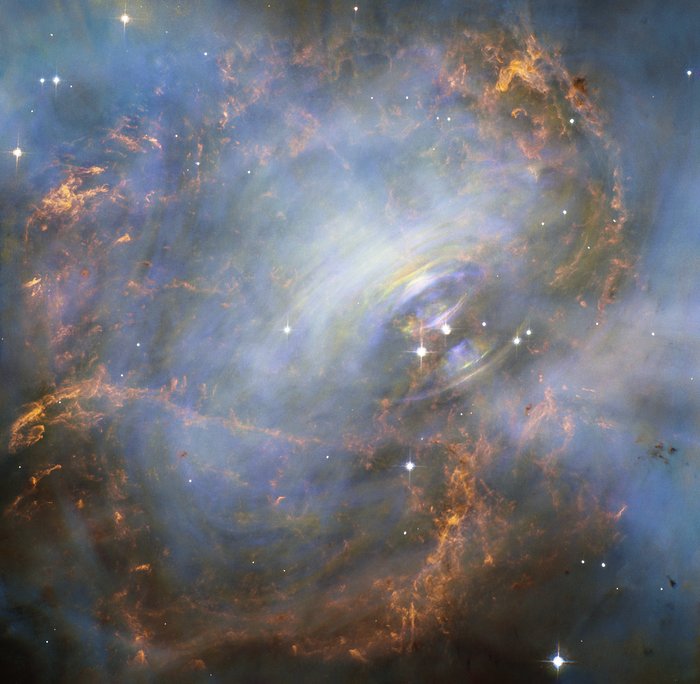 This extraordinary view of the nebula is one that has never been seen before. Unlike many popular images of this well-known object, which highlight the spectacular filaments in the outer regions, this image shows just the inner part of the nebula and combines three separate high-resolution images — each represented in a different colour — taken around ten years apart.

This video zooms into part of the sky in the constellation of Taurus (The Bull) ending on the inner parts of the famous Crab Nebula, a supernova remnant.

At the very centre of the Crab Nebula lies what remains of the innermost core of the original star, now a strange and exotic object known as a neutron star. Made entirely of subatomic particles called neutrons, a neutron star has about the same mass as the Sun, but compressed into a sphere only a few tens of kilometres across. A typical neutron star spins incredibly fast and the one at the centre of the Crab Nebula is no exception, rotating approximately 30 times per second.

The region around a neutron star is a showcase for extreme physical processes and considerable violence. The rapid motion of the material nearest to the star is revealed by the subtle rainbow of colours in this time-lapse image, the rainbow effect being due to the movement of material over the time between one image and another.

Hubble’s sharp eye also captures the intricate details of the ionised gas, shown in red in this image, that forms a swirling medley of cavities and filaments. Inside this shell of ionised gas a ghostly blue glow surrounds the spinning neutron star. This glow is radiation given off by electrons spiralling in the powerful magnetic field around the star at nearly the speed of light [1].

This fulldome clip of the Crab Nebula allows for a close inspection of one of the most intricate and fascinating objects in our galaxy. This complicated web of gas and dust is what remains of a star which exploded and lit up the skies of Earth in 1054, as documented by Chinese astronomers at the time.

The supernova explosion from which the Crab Nebula was born was one of the first to be recorded in human history [2]. This has made the Crab Nebula an invaluable object for the study of supernova remnants and has enabled astronomers to probe the lives and deaths of stars as never before.
Notes

[1] The star’s intense magnetic field is channelling infalling gas and dust to the star’s poles where it is ejected at immense speeds. Two symmetric jets of material are beamed out from the poles, sweeping out into space as the star rotates. Rather like a lighthouse beam, the jets periodically point towards Earth and present astronomers with a blinking — or pulsing — source of light in the sky. Accordingly, these objects are known as pulsars.

[2] The story began in the year 1054 CE, when a new star became visible in the night sky. The new star was the brightest object in the night sky, second only to the Moon. At the time, Chinese and Japanese astronomers recorded the event, and monitored the new star as it gradually faded in brightness until, after several years, it became invisible to the naked eye.
More information