The key obstacle in quantum computing is the control of electron spins long enough. École polytechnique fédérale de Lausanne (EPFL) scientists have discovered that carbon nanospheres can overcome these challenges, even at room temperature.

TEM image of carbon nanospheres on a carbon support

Electron spin is a term that can be thought of as the rotation of an electron around itself, which creates a magnetic moment. As such, spin has direction, and can point upward and downward. Preserving this direction long enough is key to building quantum computers, where the traditional bit is replaced by the quantum bit or “qubit”, which describes the spin state of an electron. The problem so far has been to develop material platforms where electron spins last long enough and can be controlled. EPFL scientists have now found a solution by using a special kind of carbon nanospheres.

In 1981, Richard Feynman asked if quantum computers were feasible. If realized, such machines could be used for virtual simulations of quantum systems, practically unbreakable encryption, and considerably faster searches of large sets of data.

But the first step to actually building a quantum computer is finding a way to achieve controllable and sustainable qubits. The best way – at least in theory – seems to be exploiting the different spin states of electrons – “up” or “down”.

The lab of Laszló Forró at EPFL has now discovered that nano-sized spheres of carbon can serve as a platform on which electron spin can be controlled, even close to 27 oC. “This is a breakthrough because attempts at controlling spin have often been restricted to very low temperatures”, says Bálint Náfrádi, who led the project. 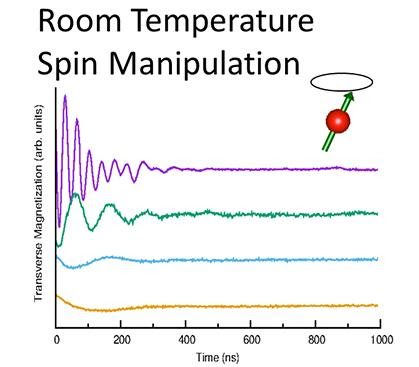 The problem that the nanospheres overcome is something called electron spin “decoherence”. As the name implies, decoherence describes the breakdown of electron spin states, usually when they are affected by an outside perturbation like a magnetic field. When thinking about quantum computing, we need to consider the integrity of information as it is transmitted in qubits. If the qubits don’t last long enough, the information will be corrupted and unusable.

This means that the time-window of spin-state decoherence is very important. Current requirements put it at ~100 ns, which is considered state-of-the-art. With the carbon nanospheres, the EPFL scientists found that they could control electron spin states for 175 nanoseconds at room temperature. This duration surpasses the longest times in any such material of comparable size.

The discovery represents a big step forward on the way to systems based on electron spin. The authors state: “These results demonstrate the feasibility of operating electron spins in conducting carbon nanospheres as quantum bits at room temperature.”

The work is published in Nature Communications.