It is common knowledge that the modern turtle shell is largely used for protection. No other living vertebrate has so drastically altered its body to form such an impenetrable protective structure as the turtle. However, a new study by an international group of paleontologists suggests that the broad ribbed proto shell on the earliest partially shelled fossil turtles was initially an adaptation, for burrowing underground, not for protection. Paleontologist Tyler Lyson from the Denver Museum of Nature & Science is among the scientists that helped make this discovery.

This is an artistic rendering of the early proto turtle Eunotosaurus (foreground) burrowing into the banks of a dried up pond to escape the harsh arid environment present 260 million years ago in South Africa. Meanwhile, a herd of Bradysaurus (background) congregates around the remaining muddy water. 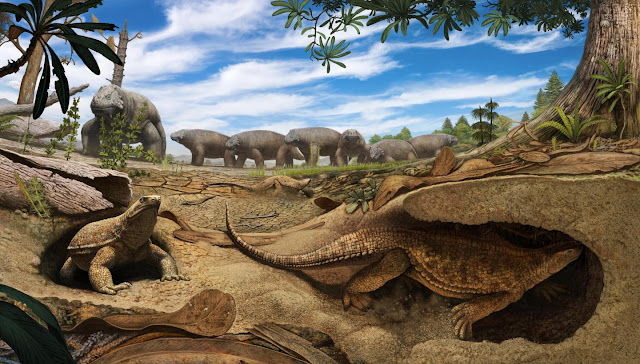 "Why the turtle shell evolved is a very Dr. Seuss-like question and the answer seems pretty obvious - it was for protection," said Dr. Lyson, lead author of Fossorial Origin of the Turtle Shell, which was released today by Current Biology. But just like the bird feather did not initially evolve for flight, the earliest beginnings of the turtle shell was not for protection but rather for digging underground to escape the harsh South African environment where these early proto turtles lived."

The early evolution of the turtle shell had long puzzled scientists. "We knew from both the fossil record and observing how the turtle shell develops in modern turtles that one of the first major changes toward a shell was the broadening of the ribs," said Dr. Lyson.

A recent study on the oldest proto turtle, Eunotosaurus (left), suggests the broadening of the ribs in turtles was initially an adaptation for burrowing to escape the extremely arid environment of South Africa 260 million years ago. Later the ribs were incorporated into the modern protective turtle shell as found in Pelusios (right). 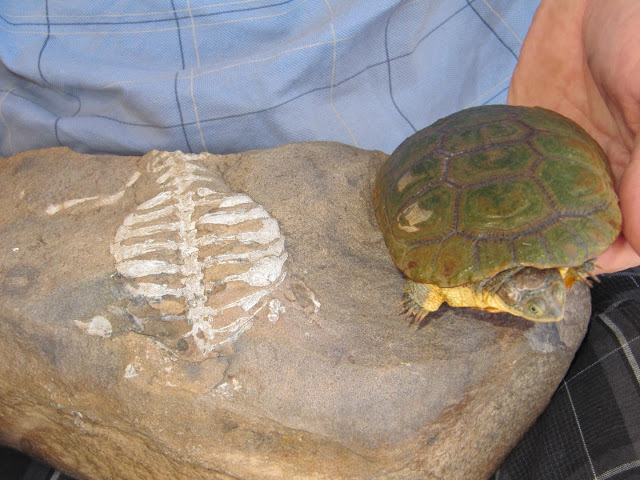 While distinctly broadened ribs may not seem like a significant modification, it has a serious impact on both breathing and speed in quadrupedal animals. Ribs are used to support the body during locomotion and play a crucial role in ventilating the lungs. Distinctly broadened ribs stiffen the torso, which shortens an animals stride length and slows it down, interfering with breathing.

This is a new fossil of the oldest proto turtle, Eunotosaurus, discovered by then 8-year-old Kobus Snyman on his father's farm in the Karoo of South Africa suggest the turtle shell initially evolved not for protection, but rather as an adaptation for burrowing. The broadened ribs and the beginnings of the turtle shell provided Eunotosaurus with a stable base from which it could use its large hands and spatula shaped claws to burrow into the ground to escape the harsh arid environment found in South Africa 260 million years ago. 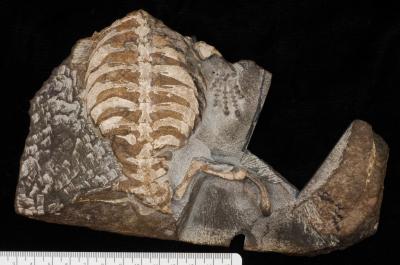 "The integral role of ribs in both locomotion and breathing is likely why we don't see much variation in the shape of ribs," said Dr. Lyson. "Ribs are generally pretty boring bones. The ribs of whales, snakes, dinosaurs, humans, and pretty much all other animals look the same. Turtles are the one exception, where they are highly modified to form the majority of the shell."

A big breakthrough came with the discovery of several specimens of the oldest (260- million-year-old) partially shelled proto turtle, Eunotosaurus africanus, from the Karoo Basin of South Africa. Several of these specimens were discovered by two of the study's coauthors, Drs. Roger Smith and Bruce Rubidge from the University of Witwatersrand in Johannesburg. But the most important specimen was found by a then 8-year-old South African boy on his father's farm in the Western Cape of South Africa. This specimen, which is about 15 cm long, comprises a well preserved skeleton together with the fully articulated hands and feet.

"I want to thank Kobus Snyman and shake his hand because without Kobus both finding the specimen and taking it to his local museum, the Fransie Pienaar Museum in Prince Albert, this study would not have been possible," said Dr. Lyson.

The study includes authors from the United States, South Africa, and Switzerland.