Proponents of clean energy will soon have a new source to add to their existing array of solar, wind, and hydropower: osmotic power. Or more specifically, energy generated by a natural phenomenon occurring when fresh water comes into contact with seawater through a membrane.

Researchers at EPFL’s Laboratory of Nanoscale Biology have developed an osmotic power generation system that delivers never-before-seen yields. Their innovation lies in a three atoms thick membrane used to separate the two fluids. The results of their research have been published in Nature.

If the system is used with seawater and fresh water, salt ions in the seawater pass through the membrane into the fresh water until both fluids have the same salt concentration. And since an ion is simply an atom with an electrical charge, the movement of the salt ions can be harnessed to generate electricity.

A 3 atoms thick, selective membrane that does the job 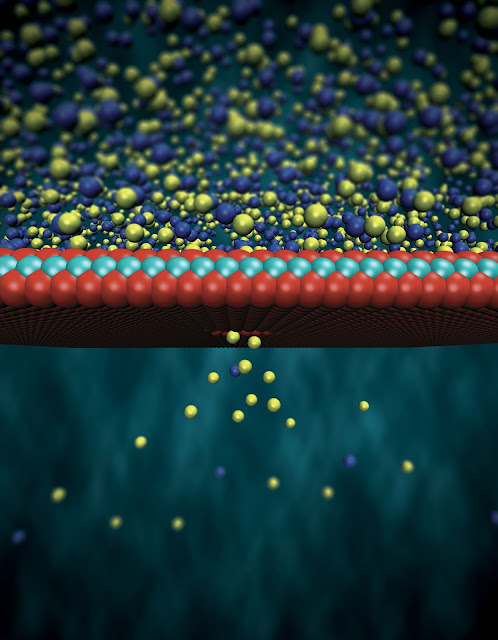 EPFL’s system consists of two liquid-filled compartments separated by a thin membrane made of molybdenum disulfide. The membrane has a tiny hole, or nanopore, through which seawater ions pass into the fresh water until the two fluids’ salt concentrations are equal. As the ions pass through the nanopore, their electrons are transferred to an electrode – which is what is used to generate an electric current.

Thanks to its properties the membrane allows positively-charged ions to pass through, while pushing away most of the negatively-charged ones. That creates voltage between the two liquids as one builds up a positive charge and the other a negative charge. This voltage is what causes the current generated by the transfer of ions to flow.

What sets EPFL’s system apart is its membrane. In these types of systems, the current increases with a thinner membrane. And EPFL’s membrane is just a few atoms thick. The material it is made of – molybdenum disulfide – is ideal for generating an osmotic current. “This is the first time a two-dimensional material has been used for this type of application,” said Aleksandra Radenovic, head of the laboratory of Nanoscale Biology

Powering 50’000 energy-saving light bulbs with 1m2 membrane
The potential of the new system is huge. According to their calculations, a 1m2 membrane with 30% of its surface covered by nanopores should be able to produce 1MW of electricity – or enough to power 50,000 standard energy-saving light bulbs. And since molybdenum disulfide (MoS2) is easily found in nature or can be grown by chemical vapor deposition, the

system could feasibly be ramped up for large-scale power generation. The major challenge in scaling-up this process is finding out how to make relatively uniform pores.

Until now, researchers have worked on a membrane with a single nanopore, in order to understand precisely what was going on. '' From an engineering perspective, single nanopore system is ideal to further our fundamental understanding of 8=-based processes and provide useful information for industry-level commercialization'', said Jiandong Feng.

The researchers were able to run a nanotransistor from the current generated by a single nanopore and thus demonstrated a self-powered nanosystem. Low-power single-layer MoS2 transistors were fabricated in collaboration with Andras Kis’ team at at EPFL, while molecular dynamics simulations were performed by collaborators at University of Illinois at Urbana–Champaign

Harnessing the potential of estuaries
EPFL’s research is part of a growing trend. For the past several years, scientists around the world have been developing systems that leverage osmotic power to create electricity. Pilot projects have sprung up in places such as Norway, the Netherlands, Japan, and the United States to generate energy at estuaries, where rivers flow into the sea. For now, the membranes used in most systems are organic and fragile, and deliver low yields. Some systems use the movement of water, rather than ions, to power turbines that in turn produce electricity.

Once the systems become more robust, osmotic power could play a major role in the generation of renewable energy. While solar panels require adequate sunlight and wind turbines adequate wind, osmotic energy can be produced just about any time of day or night – provided there’s an estuary nearby.