Scientists still aren't sure why T. rex had those absurdly small forelimbs, but apparently the look was all the rage in the Late Cretaceous. A newly-discovered dinosaur from Patagonia has similar short, two-fingered claws, even though it's not closely related to the tyrannosaurs. Like Tyrannosaurus rex, the new Gualicho shinyae is a theropod, one of the two-legged, bird-like dinosaurs, but it's on a different branch of the family tree, meaning that the unusual limbs evolved independently rather than arising from a common short-armed ancestor.

"Gualicho is kind of a mosaic dinosaur, it has features that you normally see in different kinds of theropods," says corresponding author Peter Makovicky, The Field Museum's Curator of Dinosaurs, who helped describe the new species in PLOS ONE. "It's really unusual--it's different from the other carnivorous dinosaurs found in the same rock formation, and it doesn't fit neatly into any category."

Gualicho (named in reference to the gualichu) is a genus of carnosaurian theropod dinosaur. The type species is Gualicho shinyae. Gualicho lived throughout what is now northern Patagonia, on what was then an island continent known as Gondwana. The fossils were found in the Huincul Formation, dating to the late Cenomanian-early Turonian age of the upper Cretaceous Period, around 93 million years ago. Like the well-known Tyrannosaurus, to which it has been compared, the 6–7 m (20–23 ft) Gualicho possesses reduced arms and two fingered hands. This finding indicates that carnosaurs were subject to the same evolution of limb-reduction as the Tyrannosauridae and Abelisauridae.

Gualicho is an allosaurid, a branch of medium-to-large carnivorous theropod dinosaurs. The skeleton discovered is incomplete, but scientists estimate that it was a medium-sized predator weighing around a thousand pounds, comparable to a polar bear. It's very different from the other dinosaurs that lived near it; if anything, it looks most like Deltadromeus, a leggy, carnivorous dinosaur with slender arms found in Africa, which it appears to be closely related to.

Akiko Shinya, the Field Museum's chief fossil preparator for whom the new dinosaur is named, with Gualicho shinyae at the dig site. 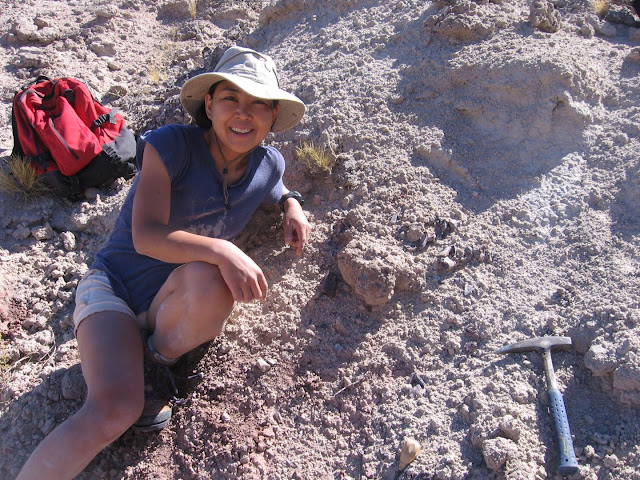 Despite its large size, Gualicho's forelimbs were the size of a human child's, and like T. rex, it had just two digits (thumb and forefinger). While Gualicho doesn't explain why so many theropods had reduced forelimbs, it adds to evidence that the trait evolved independently numerous times. "By learning more about how reduced forelimbs evolved, we may be able to figure out why they evolved," explained Makovicky.

The dinosaur's name hints at the story of its discovery during a joint expedition led by the authors in 2007 to the fossil-rich Huincul Formation of northern Patagonia. The species nameshinyae honors the discoverer, Akiko Shinya, while the generic name Gualicho derives from Gualichu, a spirit revered by Patagonia's Tehuelche people. The team joked about the "curse of Gualichu" when hit with bad luck during the expedition, like when they rolled a truck (everyone was okay, except for some cuts and bruises).

Akiko Shinya, The Field Museum's chief fossil preparator for whom the new dinosaur is named, explains, "We found Gualicho at the very end of the expedition. Pete joked, 'It's the last day, you'd better find something good!' And then I almost immediately was like, 'Pete, I found something.' I could tell right away that it was good."

The new dinosaur's generic name Gualicho derives from Gualichu, a spirit revered by Patagonia's Tehuelche people. The team joked about the "curse of Gualichu" when hit with bad luck during the expedition, like when they rolled a truck (everyone was okay, except for some cuts and bruises). 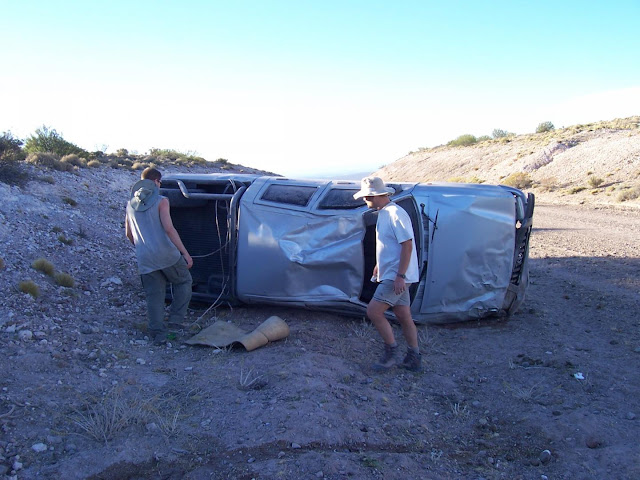 The paper describing the new species was published in PLOS ONE, and was contributed to by authors at the Universidad Maimónides in Argentina, the Dinosaur Institute at the Natural History Museum of Los Angeles County, and the Gobierno de la Provincia de Río Negro in Argentina.