The dragons from ‘Game of Thrones’ have come to life in insect form. New ant species that appear dragon-like due to their large and distinctive spines were recently found in the tropical rainforests of Papua New Guinea.

Although they lack fire-breathing capabilities, the unique, spiny characteristics of the ants reminded the scientists who discovered them of the mythical dragons from the fantasy series and inspired them to name the ants after the 'Game of Thrones' dragons.

The process of identifying, documenting, and naming new species, "taxonomy" is one of the oldest and most basic tasks in biology. Traditionally, new species are described with photographs, drawings, and verbal descriptions. In this study, the authors used new 3D imaging technology called X-Ray microtomography, which is similar to CT scans used in hospitals, only at a much higher resolution suitable for smaller objects, such as an ant.

"This is one of the first studies in ant taxonomy to use micro-CT," said Economo, head of OIST's Biodiversity and Biocomplexity Unit. "While this method is gaining popularity in different scientific fields, it is rare to use it in this way." 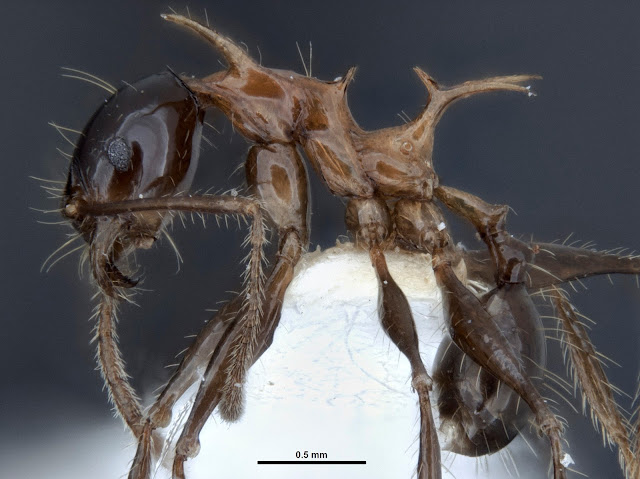 Once an ant is scanned using this method, it becomes a virtual specimen that "lives" in 3D; it can then be dissected, archived, and shared with other scientists around the world.

"If you are working in the bush in Africa and find an ant that you want to identify, it is really difficult to fly all the way to a museum in Europe or the U.S. to see collections of already known species," Fischer, co-author and postdoctoral scholar in OIST's Biodiversity and Biocomplexity unit said. "This way you can download the virtual ant, make measurements, and compare it to the specimen you are trying to identify."

3-D scans of Pheidole drogon minor (left) and major worker (right), a newly discovered species named after the dragons in 'Game of Thrones'.

This is almost the same as having the physical specimen in front of you and "in some ways it is better than the real thing," Economo added. "Because you can virtually dissect the specimen and examine internal structure on your computer."

The researchers used 3D imaging together with more traditional techniques, to describe two groups of ant species, one from Papua New Guinea and the other from Fiji. The team then created 3D galleries of each species, both new and previously known, which should be especially useful for people looking to identify and differentiate ant specimens.

The researchers also took advantage of these new 3D imaging capabilities to look inside the spines of the major worker ants for clues to their function. While the most obvious function of the spines is for defence against predators, the researchers additionally found that the spines were filled with muscle, which may make the ants stronger and more robust relative to non-spiny ants.

The muscle fibers (red) can be seen inside the spines of the virtually dissected 3D ant.

The integration of X-ray micro-CT and 3D imaging is a modern and tech-savvy take on the ancient art of taxonomy; and the continuous advance of modern technology provides new and exciting opportunities to improve even the oldest of disciplines.

"Taxonomy is fundamental to all other biological sciences, because it allows us to organize the information we discover about living things, but too often it is seen as boring or old-school," Economo said. "These new technologies can revolutionize the way we discover, document, and share information about new species, which is disruptive in an exciting way."

Contacts and sources:
Kaoru Natori
By Rebecca Hofland
on July 27, 2016